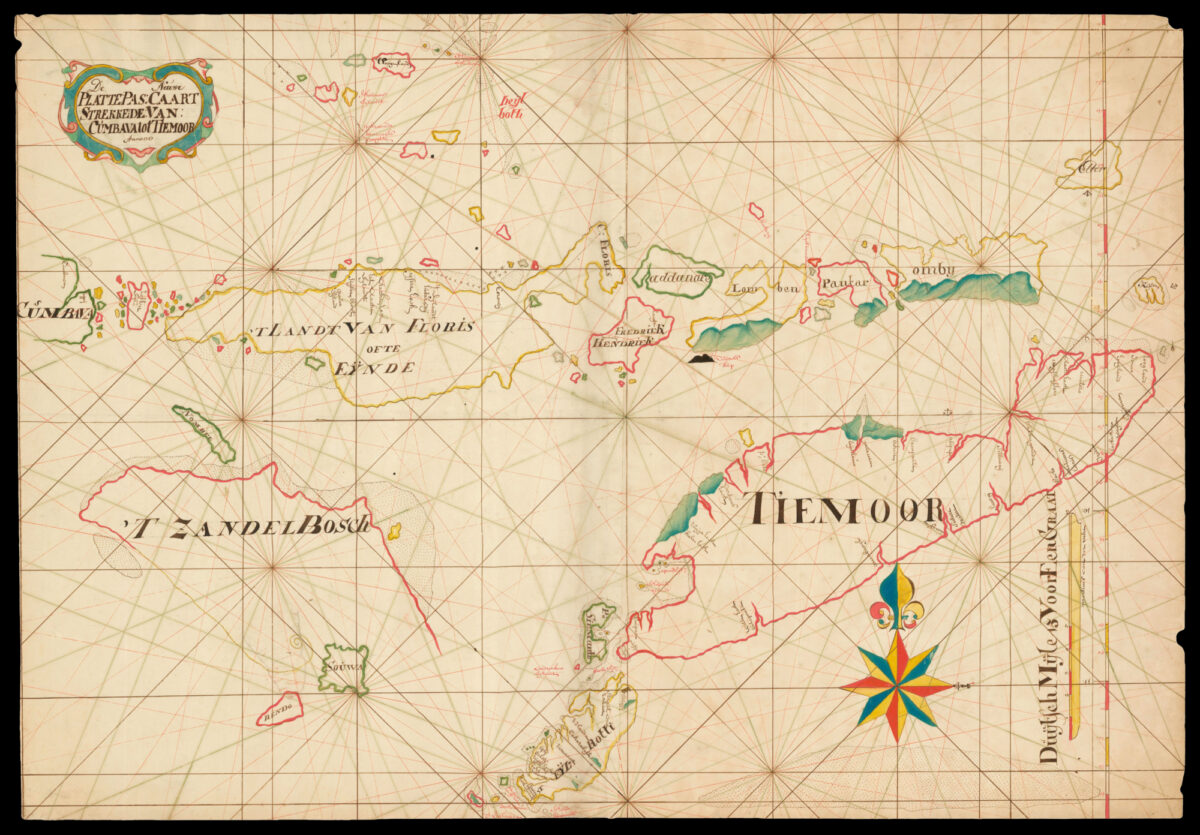 The Portuguese first settled on Timor in 1520, and the Spanish arrived in 1522. The Dutch took possession of the western portion of the island in 1613. Thereafter, until the twentieth century, the Dutch and the Portuguese struggled for supremacy of the island, with East Timor being virtually all that eluded the Dutch domination of Indonesia. This large-scale and detailed chart shows the Lesser Sunda islands, the southernmost Indonesian islands, between the Banda Sea in the north and the Timor Sea in the south, just north of Australia. The chart includes present-day West Nusa Tenggara, East Nusa Tenggara and Timor, which guarded the southern routes to the Spice Islands.
Veke’s cartography follows closely that expressed in Francois Valentyn’s chart ​‘Kaart der Zuyd-Wester Eylanden van Banda’, from ​‘Oud en Nieuw Oost-Indien, vervattende een Naaukeurige en Uitvoerige Verhandelinge van Nederlands Mogentheyd in die Gewesten’ (1724–1726), based on his own travels in the area and previously unpublished VOC charts and information.
Campbell records that ​“Martinus van der Veeke (Velde, Vecke) came to Batavia from Rotterdam in 1727. He appears on the muster-rolls of the VOC between 1744 and 1749” (Campbell, p. 44, no. 152), and the style of his chart is very similar to that of Paulus Paulusz., baas-kaartenmaker (chief mapmaker) in Batavia from 1736–1747. Paulusz., or Paulson, was a Swede from Karlskrona. ​“On 13 May 1733, he set sail for Batavia as gunner on board the Delfland, which had been outfitted by the Amsterdam Chamber. Under way, the Governor at the Cape appointed him to the position of second pilot. The Delfland arrived in Batavia on 12 February 1734. After that, he served in 1734 and 1735 as a pilot on the ships Barbersteijn and Middelwout. In 1736, he was appointed head of the kaartenmakers-winkel, replacing the deceased baas-kaartenmaker, Frans de Put (1733–35), for a salary of 60 guilders. Paulus Paulusz was baas-kaartenmaker until 1747 (drawing a salary of 100 guilders in that year), when Gerrit de Haan succeeded him. At the same time, he was also pursuing a distinguished career for himself in the navy. In 1739 he became a ship’s master, in 1745 an ensign and in 1749 a lieutenant at sea; thereafter he rose to the rank of captain at sea, and in 1750 to artillery major with a salary of 150 guilders. On 17 December 1745, Paulus Paulsz was appointed head of the Academie de Marine” (Schilder, plage 173). He is known to have undertaken a number of local surveying voyages, particularly along the south coast of Java in 1739, and it is very likely that the information in the current map is a direct result.
The chart is drawn on Dutch paper with a watermark that dates to about 1733. It bears hand-drawn rhumb lines, and so pre-dates the measures, such as pre-printed compass lines, implemented later to minimize copying errors. In 1753, the sixth volume of the ​‘Zee-Fakkel, vertoonende de zee-kusten, eylanden en havens van Osst-Indien’, depicting the sea coasts, islands and harbours of the East Indies, was printed by Johannes II Van Keulen. From the following year, each VOC ship departing Holland had this volume on board, with orders for the pilots to compare the charts and descriptions with their own findings. Discrepancies were to be reported to the publisher, who would update the printed charts, and the ​“name of the informer would be inserted into the Nautical Atlas in his memory and honour” (Schilder p.165). It is not surprising, therefore, that in 1755, Gerrit de Haan felt able to return 1163 parchment charts to Amsterdam from Batavia, having deemed them to be defective. It is highly likely that the current chart is one of these. 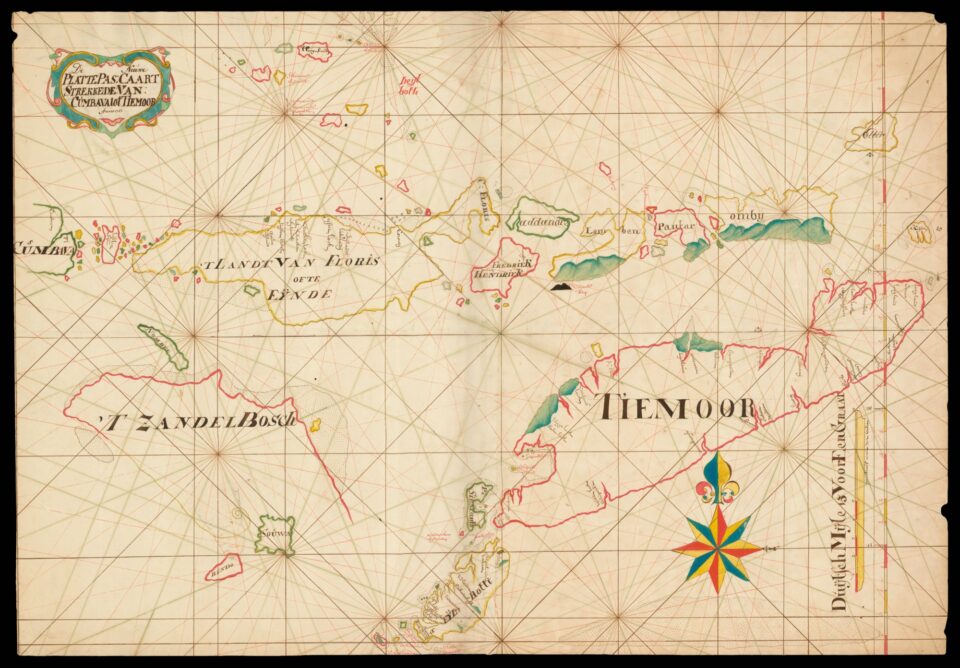