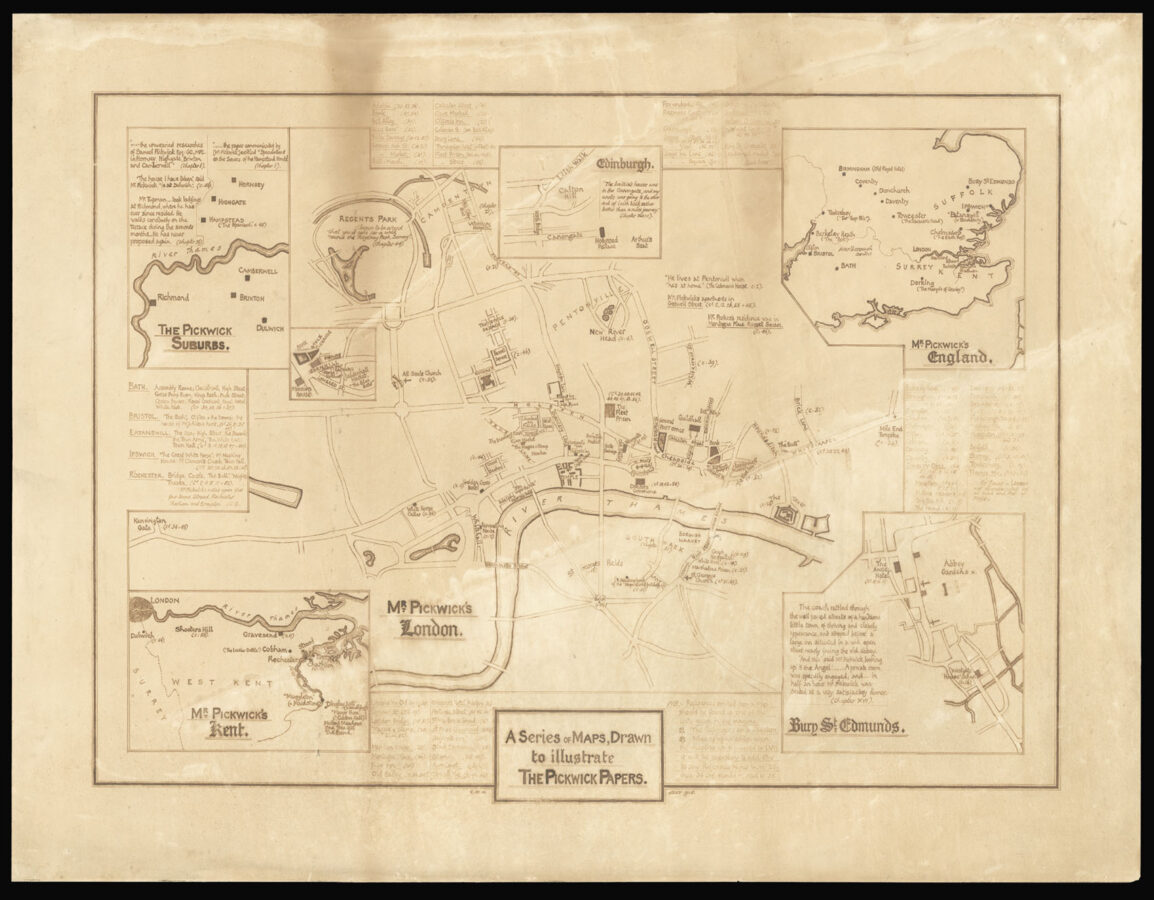 A series of maps, drawn to illustrate The Pickwick Papers

This unique, hand-drawn set of maps brings to life Charles Dickens’ first novel, ​‘The Pickwick Papers’. Originally serialised and published in monthly installments from 1836, the narrative follows the journeys of the ​‘Pickwickians’, members of an eponymous society founded by Mr Pickwick, as they travel throughout the English countryside and report on their experiences. Here Dickens first employs the seamless blend of satire, caricature and social commentary that would become his signature style. Capturing the quintessential aspect of life in Victorian England, the author reflects the reader’s customs and beliefs back at them with his humorous approach. So vivid are his verbal illustrations of the places in which the story unfolds, that the creator of these plans has been able to map the narrative so precisely.

Featured in the centre is a map of Westminster and Southwark, where the various hotels, pubs and even prison occupied by the characters are shown, accompanied by bracketed numbers corresponding to the relevant chapters of the book. In chapter 21, a cantankerous old man bemoans the state of London, lamenting that ​“poverty and debauchery lie festering in the crowded alleys; want and misfortune are pent up in the narrow prison”. A small inset view presents the area around Bank in greater detail, including ​“The Blue Boar” inn where Mr Weller meets with his father in chapter 33. In the upper left corner, the western suburbs of London are shown, along with four quotations mentioning the relevant locations. Below this inset, another illustrates Kent, which Mr Tupman visits at the beginning of the book and is reassured by a local that the county consists of nothing more than ​“apples, cherries, hops, and women”. The opposite corner contains a plan of Bury St Edmunds, which the adjacent quotation describes as ​“a handsome little town, of thriving and cleanly appearance”. In the town, Mr Pickwick stays at The Angel hotel, a real establishment frequented by Dickens and still in operation today. Another inset shows a small intersection of roads in Edinburgh, where a story told in chapter 49 is set. The upper right corner contains a small-scale map of South East England, in which the journeys of the Pickwickians take place.

No detail is spared on this series of maps, with a number of tables listing the places of importance shown on the image, as well as a supplementary list of locations not illustrated here. Although initialled with the letters C.M.N., it is not clear who designed and drew these maps. Three editions of ​‘The Pickwick Papers’ were published in 1908, to when this is dated, but none of them seem to contain any sort of map. It is perhaps more likely that this manuscript image was the personal project of an ardent Dickens fan; its detail and precision are certainly evidence of a diligent and enthusiastic illustrator.