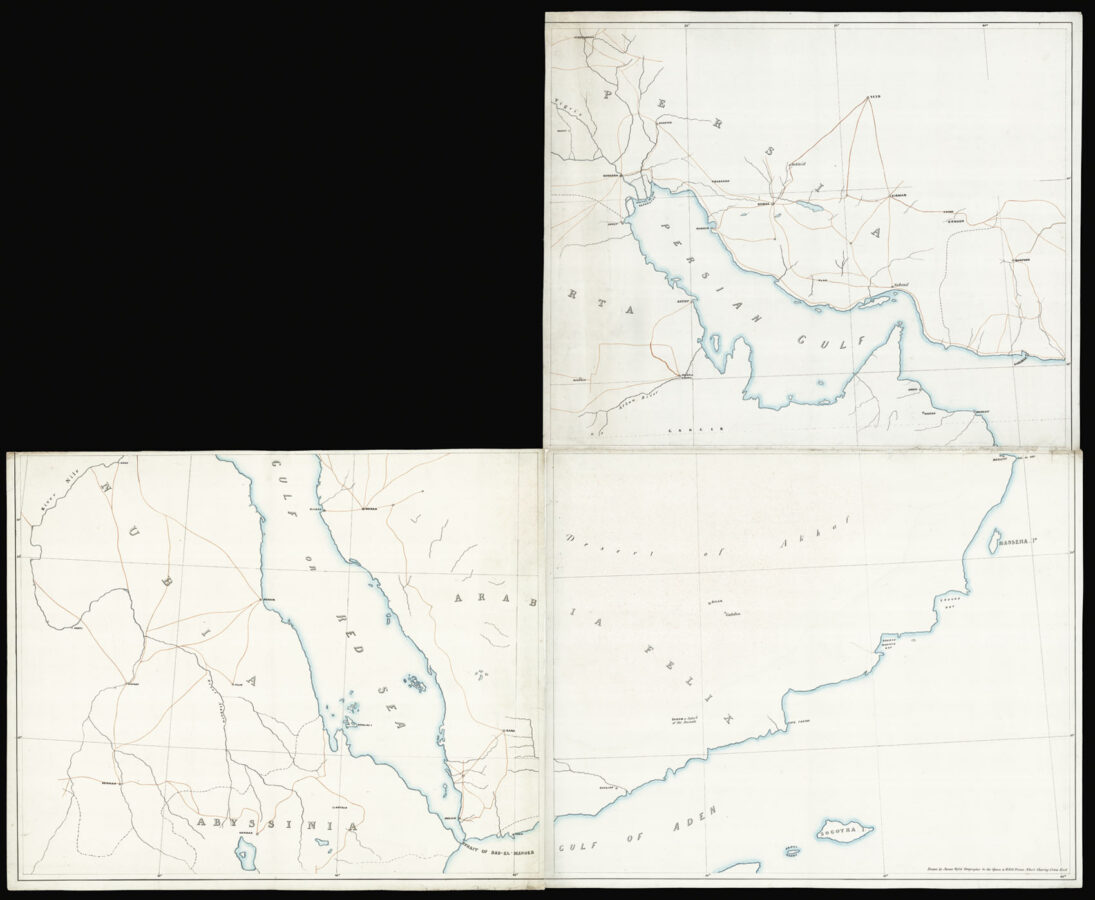 Manuscript map of the Arabian Peninsula

[Manuscript map of the Arabian Peninsula].

One of the largest maps of the Arabian peninsular produced in the nineteenth century.

The geography is based on Wyld’s ​‘Map of the countries lying between Turkey & Birmah’ first published in 1839. For the present manuscript map Wyld has increased the scale by some four time (from approximately 125 miles to the inch to 32 miles to the inch), removed all topographical features, and all but the most important cities. The stripping of all superfluous detail highlights the road network and enables the viewer to get a much clearer picture of the region, and how the major urban centres were related. This would have been invaluable to the British, who had by the early nineteenth century begun to take a keen interest in the Middle East. Their principal concern was Russian interference in the region and the threat they posed to British control of India. The British had also recently taken control of the port of Aden — the territory here marked by a dotted line — which they deemed vital for the protection of vessels through the Red sea, and as a refuelling point for steamers.

James Wyld sr. was apprenticed to William Faden in the Clothworkers’ Company in 1804, and made free in 1811. After his freedom, Wyld seems to have worked as a surveyor and for the Quartermaster General’s Office, the department of the army responsible for publishing maps, being involved in producing maps for use by the British Army in the Peninsula War. This war saw the first use of mass lithographic printing for map publishing.

For much of the century the family were the leading English mapmakers and publishers, succeeding Faden as geographer to the King and to the Duke of York, and then by appointment to King William IV and then Queen Victoria. Wyld sr. was one of the founding members of the Royal Geographical Society in August 1830. In the second half of the century they were challenged by Edward Stanford. Under the third James Wyld the firm went into decline, and in 1893 the business acquired by Edward Stanford Ltd.

The mainstay of the business was the cartographical materials acquired from William Faden, which they issued separately but also as the core of their world atlases. However, James sr. and jr. were diligent in expanding the diversity of maps they published and all their stock of maps by other publishers. They offered a large selection of maps of the British Isles, many related to the rapid expansion of the railway system; their foreign maps include many of the expanding colonies abroad, theatres of war during the Victorian era, battlefields and so on.

Indeed, such was the firm’s reputation for responding quickly to the latest geographical discoveries and the needs of their customers that the satirical magazine Punch commented, ​“Mr. Wyld has just published a Map of the North Pole. His industry certainly goes to the utmost limits. We doubt if there is the smallest scrap of the world left him now to make a map of. He has scoured the whole globe, as clean as a new door-plate, and left the name of ​‘WYLD’ engraved in large letters upon it. He has even used up the Arctic Regions. Go, search the North Pole, and you will find one of Wyld’s Maps dangling at the end of it. The force of mapping can surely no further go.“