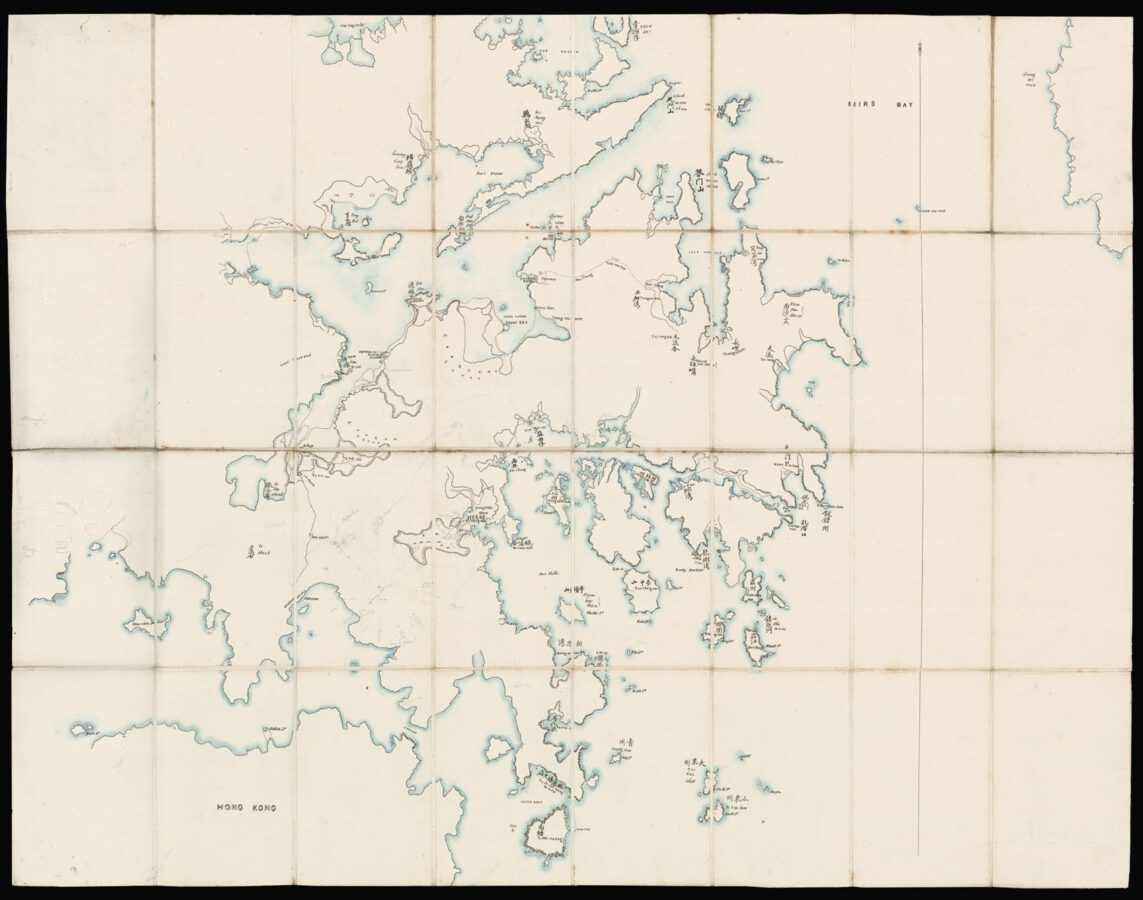 [A manuscript chart of Mirs Bay and the Hong Kong New Territories].

Manuscript draft survey of Hong Kong, the New Territories and Mirs Bay by Captain Richard Collinson. Collinson’s survey (1842–1846) was the first complete scientific survey of the Chinese coast, and his work would become the template for all subsequent charts.

The cession of Hong Kong Island and its harbour to the British Crown took place on 26 January 1841, towards the end of the First Opium War. British possession of Hong Kong was formally ratified in the Treaty of Nanking on 29 August 1842. The present chart dates to the earliest phase of British colonial rule, and depicts not only the northern part of Hong Kong but also Kowloon and the eastern half of the New Territories.

Although the chart is neither signed nor dated, comparisons with draft surveys by Collinson housed in the Hydrographic Office Archives show similarities in draftsmanship. Cliff faces (firm dark parallel lines), coasts lines (single continuous lines) and banks (dotted lines) are all executed in a recognisably confident hand. The handwriting, when compared with Collinson’s rough notebooks from the 1842–44 survey and a journal from his 1850–53 Arctic expedition at the National Maritime Museum, also shows clear similarities in graphology, particularly in the treatment of the tails and the elongated bars on lower-case letters.

Collinson’s charts are often characterized by the use of Chinese characters, to mark important geographical features, sometimes with a direct transliteration, as here. The confidence of the brush strokes suggests that they were performed by a native writer. Although not well documented, it was not uncommon for British captains to seek the help of the local population (often fishermen) when charting the local waters; Collinson is known to have hired Chinese pilots whilst surveying the Panghu Islands in 1844 and his notebooks from his Arctic expedition contain vocabulary lists in ​“Eskimo”. This would also explain some of the errors in the English place names upon the chart, some of the roman letters being incorrectly interpreted, most notably in the following examples: Mount Coehrane; Craham Cover; Young Hebes Hauen; Dinsion Point; Cambbell Haven.

The chart also bears numerous manuscript annotations in pencil, in the same hand as the key pasted to the inside of the upper cover, which would appear to be Collinson’s own hand. The key provides information such as: ​“Gong paoong — slept here”, ​“Taoo Chong Guam — breakfasted”, ​“Chong She Wan — boat to Victoria”. Not only does it giving interesting biographical detail it also shows that Collinson went ashore numerous times. The landing of men ashore, although dangerous, was the only way of gaining accurate surveys of the coastline; and we know that Collinson used such methods. It is mentioned in a paper presented to the Royal Geographic Society that one of this assistants went on shore in Black Rock Bay on the east coast of Taiwan in 1845 to ​“take up a position to make a survey of the place” (Swinhoe).