Manhattan real estate in the first decade of the twentieth century

A detailed guide map of Manhattan, extending north onto the mainland to Yonkers and Mount Vernon, west to the New Jersey shoreline from Hoboken to Fort Lee and beyond, and east to Long Island and Riker’s Island. Icons such as Brooklyn Bridge (1883), Manhattan Bridge (under construction since 1901, but not open to traffic until 31 December 1909), Grand Central Terminal (rebuilt between 1903 and 1913), the new subway and elevated railways are shown. In 1909 New York and New Jersey celebrated the 300th anniversary of Henry Hudson’s discovery of the Hudson River, and the centenary of Robert Fulton’s first successful commercial paddle-steamer service, with an elaborate commemoration, the Hudson-Fulton Celebration. The first decade of the twentieth century was one of exponential development and growth for lower Manhattan in particular, which peaked in 1910. Thereafter, the availability of the outer boroughs and suburbs, to companies such as the A‑RE-CO, made possible by improved transport links emphasised in this map, diffused population density and spread the reach of private and commercial development.
​“Presented with the Compliments of the American Real Estate Company (founded 1888) The Company’s holdings of New York City Real Estate are indicated in red on map above. Write for particulars concerning A‑R-E Sixs — 6% Gold Bonds based on these holdings. General Offices, Night and Day Bank Building, Fifth Avenue & 44th Street, New York”.
The areas referenced appear in the Bronx near the Simpson Street subway station, Dyckman Street in Washington Heights, and Park Hill in Yonkers.

The verso of the map includes a map of 15 A‑RE-CO developments in the Bronx, and advertises monthly meetings of the ACMY Real Estate Club, and a visit to the company’s developments for the April, 1908 meeting. 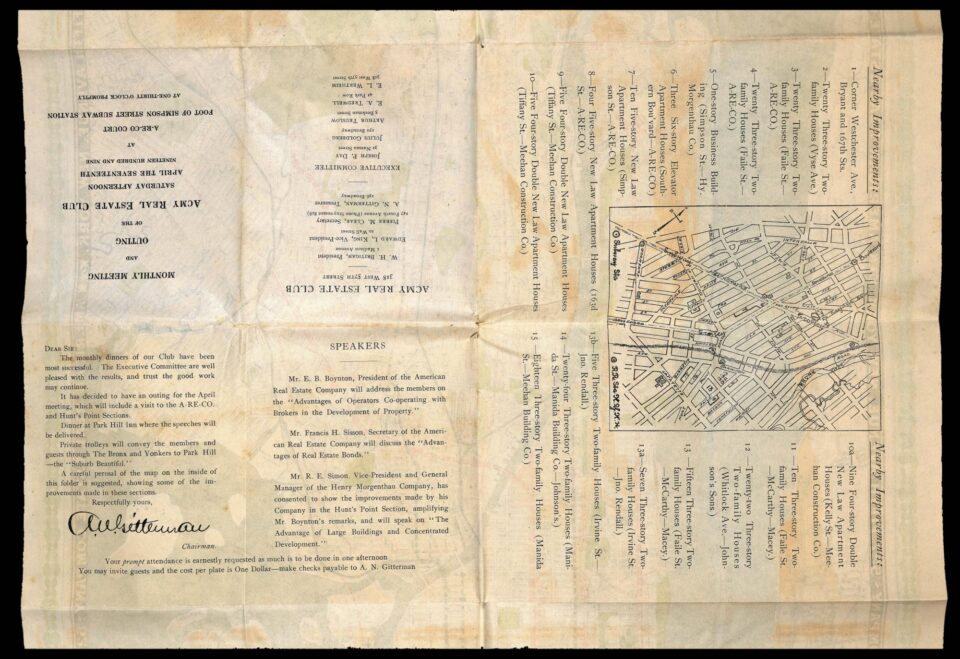