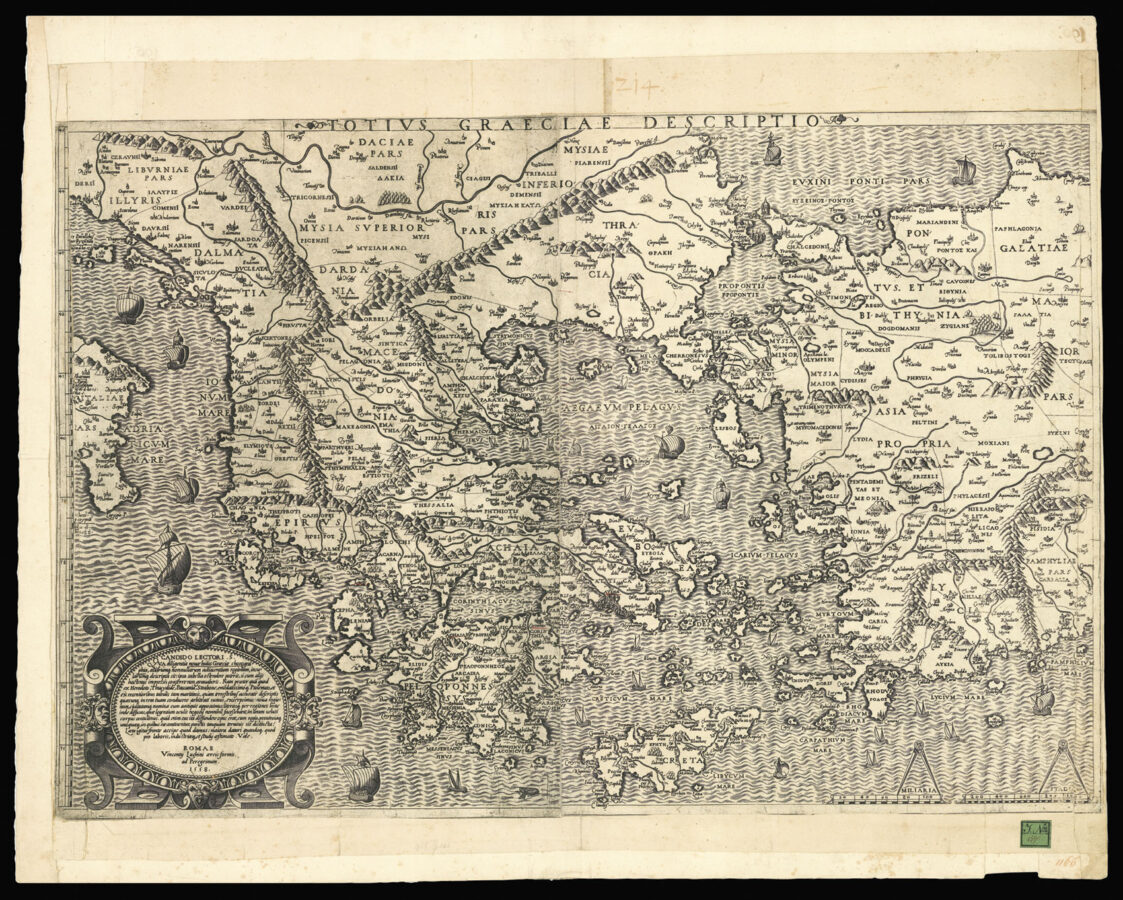 First state of two, before the address by Pietro de Nobili.

This map of Greece is the earliest obtainable map based upon Nikolaos Sophianos’s 8‑sheet map of Greece, Totius Graeciae Descriptio, the most important and influential map of Greece of the sixteenth century. Sophianos’ wall map of the the Greek territories from mythical times to the founding of the Eastern Roman Empire and the establishment of Christianity, was intended to promote the idea that Greece was an active component of the Christian and humanist legacy.

Sophianos’ map was first published in Rome in 1540. The map presented an historical cartographical panorama of the Greek world and was a major repository of antiquarian information about Greece. It was reissued frequently, being copied and plagiarized, for some forty years after its initial publication, until it was finally standardized by inclusion in Ortelius’s historical atlas, the Parergon, in 1579.

Sophianos’ map of Greece was created during his residence in Rome (1540–1542). The first edition of Sophianos’s map has been lost. Consequently, the map’s publishing history is based on indirect literary allusions and evidence from surviving copies of later editions, especially those reissued first in Basel (1545) and then in Rome (1552). Whether the Rome map was a woodcut, like the 1545 Basel version, or a copperplate, like the edition printed in Rome in 1552, is not known.

The first copy of the map was produced by the Rome publisher Francesco Salamanca.
Then the map was ipublished n Rome by Vincenzo Luchini, in 1558. Subsequently it was reproduced by Paolo Forlani (1562), Ferdinando Bertelli (1564), Giovanni Francesco Camocio (1566), and Donato Bertelli (1569) and reissued in Rome by Antonio Lafreri (1570) and Claudio Duchetti (after 1570). In 1579, a one sheet example as included in Abraham Ortelius’s Parergon.