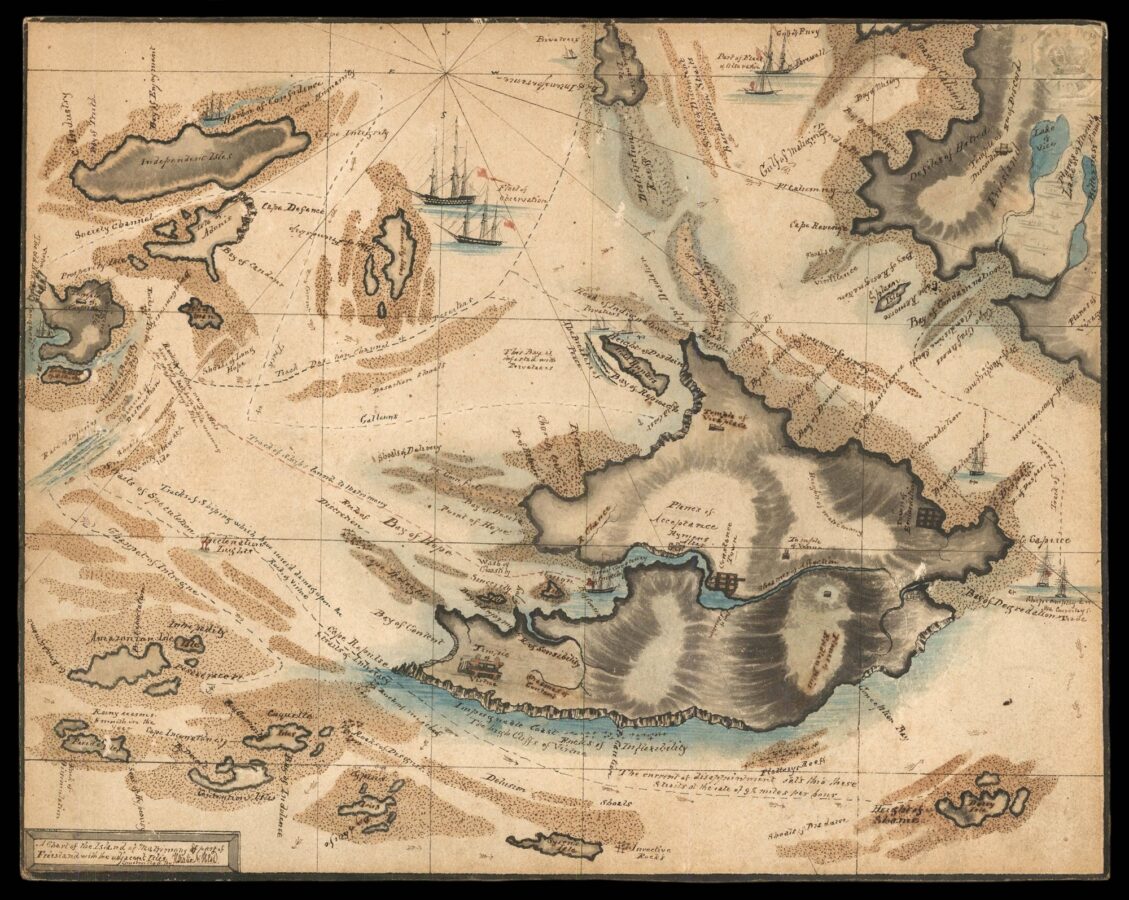 A chart of the Island of Matrimony and part of Friesland and with the adjacent isles. Constructed by Horatio: N:

During the eighteenth century, a popular subject for spoof cartography was marriage, as shown in this fantasy chart. One begins the journey in the ​“Independence Isles” and navigates through a number of landmarks including the ​“Harbor of Confidence” and ​“Temple of Cupid” before heading to the ​“Island of Matrimony”, where the ​“Wash of Chastity” and ​“Streames of Affection” await.

However, caution must be taken as just beyond the ​“Heights of Matrimony” the ​“Bay of Divorce” looms alongside ​“Cape Resistance”.

The chart also depicts part of Friesland, as mentioned in the title, in the top righthand corner of the chart beyond the Island of Matrimony. Friesland had an allegorical association with prudishness, solitude and abstinence, which is emphasized with the ​“Temple of Discord” and ​“Lake Bitterness” highlighted on its shores.

The chart features amusing vignettes throughout, with one such warning cautioning ​“the current of disappointment sails through these straits at the rate of 9 1/2 miles per hour” near the ​“Rocks of Disgust” and ​“Delusion Shoals”.

These charts offer a glimpse into Georgian morality and its approach to marriage and fidelity. One such chart made in 1772 by Anna Letitia for her husband ​“gives prominence not only to the vicissitudes of courtship but also to the negative outcomes of marriage. It depicts the Land of Matrimony and its associated island of Divorce surrounded by the Ocean of Love, and a number of smaller land masses, including Friesland and Coquet and Prude Islands to the northwest, and the Enchanted Islands to the southwest” (Ready). Letitia’s map accompanied by a poem, which reads, in part, ​“Thus canst thou, Rochemont, view this pictured chart,/And trace thy voyage to the promised shore”.

This chart is ​“constructed by Horatio N”, offering a potential link with Lord Nelson’s own love life, which faced its share of choppy waters. Nelson’s affair with the famed beauty Emma Hamilton sent ripples through polite society. Lady Hamilton was wife to Sir William Hamilton, the British Envoy to Naples, but by May 1800 she was pregnant with Nelson’s child. The affair carried on until Nelson’s death in October 1805 when he was hit by a musket ball. As he was dying, he pleaded to Lt. Thomas Hardy, ​“Take care of my dear Lady Hamilton, Hardy”.