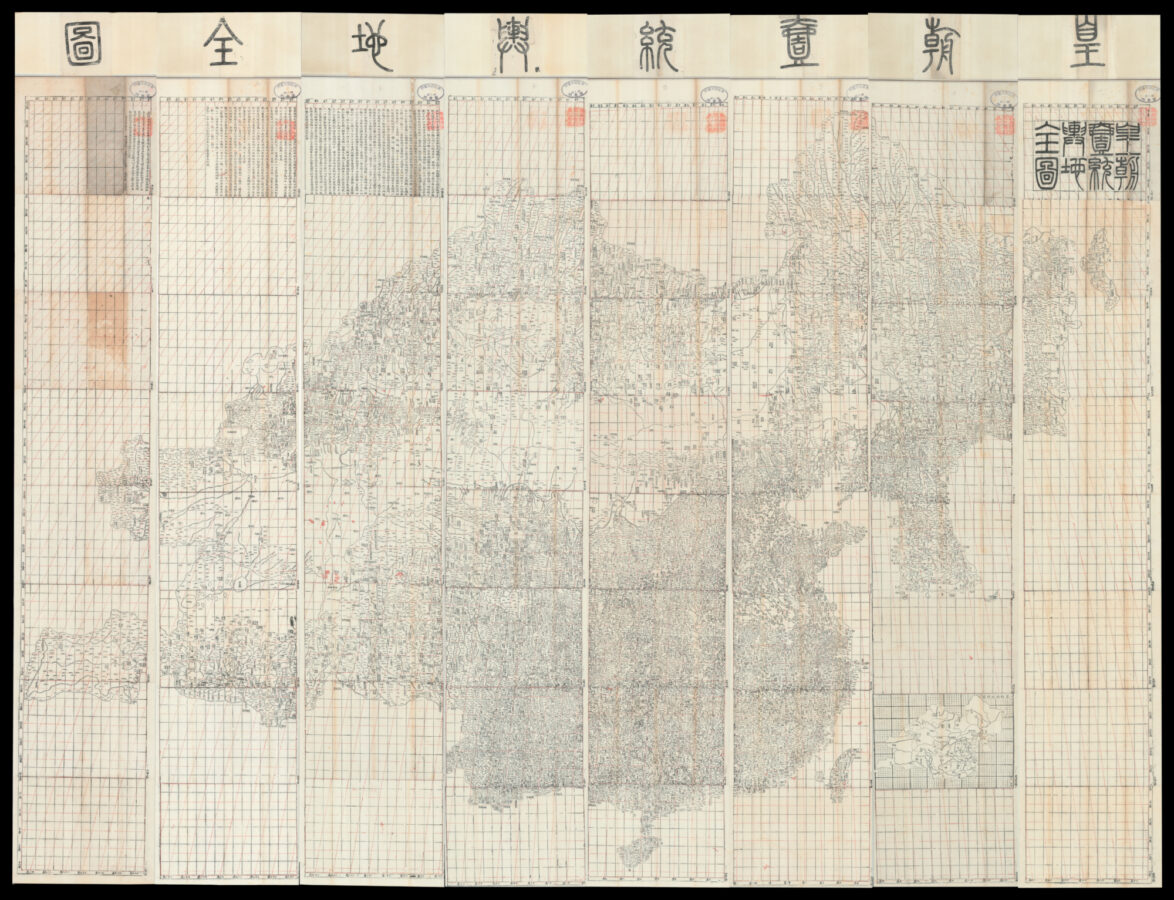 Longitude and Latitude on a map of the Qing Empire

An ambitious map comprising sixty-four sheets, divided into eight rows, each covering a latitude of 5°30′ made under the reign of Emperor Daoguang 道光 (1872- 1850, r. 1820–1850). Engraved and printed by two-colour process, the map utilizes a dual-grid system; a grid of squares in black, and the system of longitude and latitude in red. The prime meridian runs through Beijing.

The map was the most advanced and complete map of the Qing Empire in the early nineteenth century. The original map of Huangchao yitong yudi quantu first printed in 1832, was comprised of forty-one sheets, and drawn by Dong Fangli, on the basis of Kangxi huangyu quanlan tu 康熙皇輿全覽圖 (Complete Map of the Empire of the Kangxi Era, 1719), and Qianlong neifu yutu 乾隆內府與圖 (Complete Map of the Empire of the Qianlong Era, 1775). The former was an ambitious project initiated by Emperor Kangxi (1654–1722, r. 1661–1722), and is the first Chinese map to employ a longitude and latitude coordinate system. The latter was compiled using the former, with newly surveyed areas added, from the west of Hami to the east and south of Lake Balkhash, as well as Tibet. Dong Fangli corrected the changes of units and rivers in accordance with the administrative situation in the second year of Daoguang (1822). A decade later in 1832, Li Zhaoluo made a woodcut edition and joined the sectional sheets of Dong’s maps into a complete map, as exemplified by the current example printed in 1865.

A comparison of some areas to the south of Qingyuan 清苑 and Jinghai 靜海, and to the north of Anping 安平 and Nanpi 南皮, shows that this map includes only communities at and above the county level, and adds Wen’an 文安 county depicted on the Qianlong map. Some differences in the water systems may also be observed: there are twenty-three rivers and tributaries on the Qianlong map, while there are only fifteen on the present map. Xidian 西淀 lake remains much the same, while Dongdian 東淀 lake shows major changes in shape and size, with the Beiyun river 北運河 separated from it, and the Yongding River永定河, which used to flow into the lake, directly linked with the Beiyun river.

A note by Li Zhaoluo explains the dual grid system: ​“The base map uses the celestial longitude and latitude, with one degree representing 100 km on the ground. The latitudes are parallel, yet the meridians slant towards the North Pole, which cannot be used to measure distance conveniently and accurately… Simultaneously adopting the grid system (drawn in black lines) as a reference, with each side of the squares representing 50 km, enables distances to be measured easily. The parallels and meridians are rendered in dotted lines so as to facilitate astronomical observations. The latitude difference is half a degree, which represents 50 km on the ground” The Daoguang map, therefore, reflects a significant advancement in the making and use of a dual-grid system, incorporating both astronomical observations and geodetic surveys more accurately. Such a practice marked a new development in Chinese cartography, which was widely employed until the early years of the Republic.