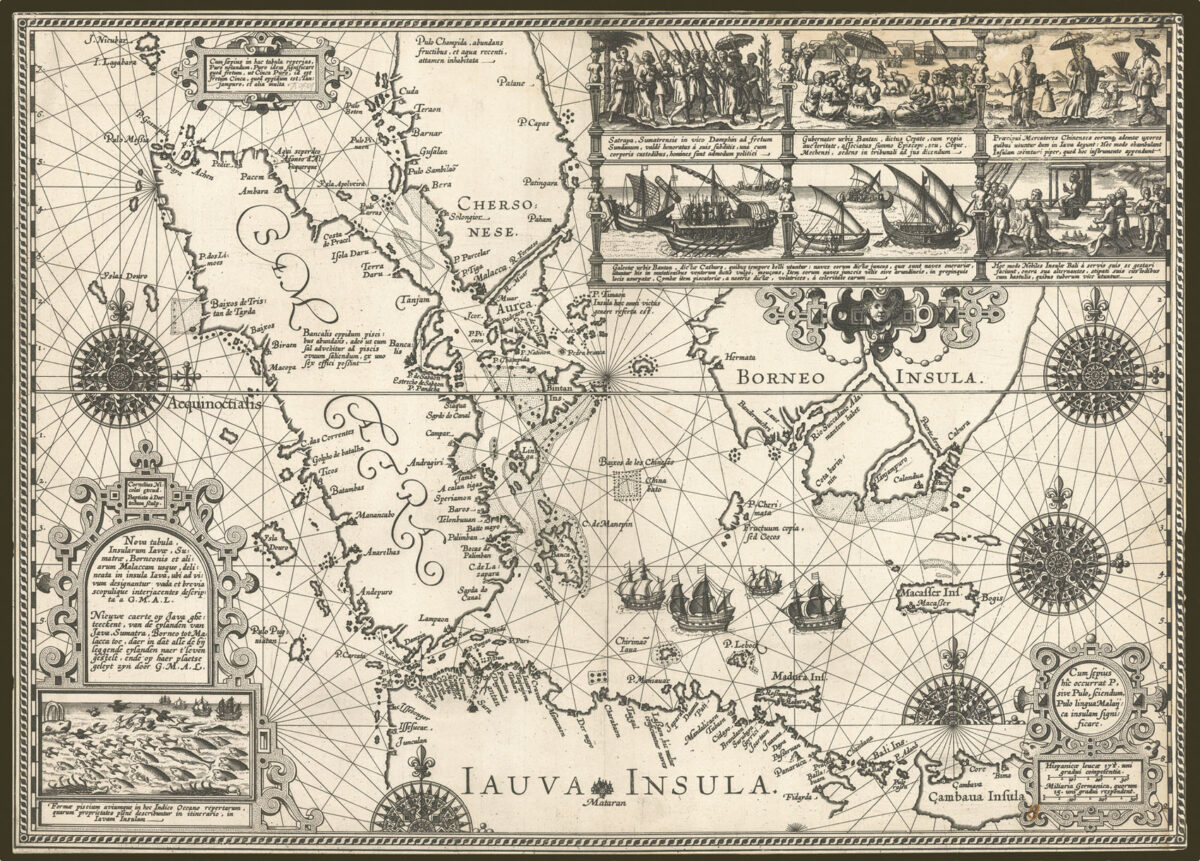 The most detailed map of the Malay Peninsula, and the islands of Sumatra, Java, and Borneo published in the sixteenth century.
A seminal map of the region depicting the area on a hitherto unprecedented scale, and illustrating the Dutch Republic’s growing interest in the area. A map so detailed that the Dutch authorities attempted to suppress its publication. The work not only presents a great deal of new information for the first time, especially to the north coast of Java and Straits of Sunda, it is also one of the earliest charts to show Singapore, as C. de Cincapura, as an island off the Malay Peninsula, and the first in such detail.
At the end of the sixteenth century, Cornelius de Houtman led the first Dutch expedition to Indonesia, parts of which were then under the control of the Portuguese. To avoid detection, the Dutch fleet shunned the well-sailed route of the Malacca Strait in favour of the unknown Sunda Strait, which runs between Sumatra and Java. They were the first to use this route, mapping much of the coast as they went. The present chart identifies the names of many ports and settlements along the Strait. In fact, this chart is the first to show an accurate, detailed depiction of Java’s north coast. Not only does it present the shape and location of the islands, but it also pictorially represents important settlements with illustrated buildings. Potential obstacles, such as rocks and reefs, are shown in the ocean, while along the upper margin and in the lower left corner, vignettes depict the experiences of the Dutch fleet. From these illustrations and the accompanying Latin text, the crew seems to have learned much about the culture and nature of the region, from the political customs of certain tribes to the wide variety of fish that inhabit the surrounding areas. They also attest to the well-established presence of Chinese merchants in Java at this time.
One of the ships that made up the Dutch Fleet, was the vessel on which Willem Janszoon made the first recorded European landing on Australia. He sailed the Duyfken from Java to the western shore of Queensland in 1606, marking an historic moment in European exploration. The Duyfken was the smallest of the four ships led by de Houtman, shown here centre right, sailing to the north of Madura. Their expedition opened up the Indonesian islands to the European spice trade, which played a major role in the emergence of the Dutch East India Company.
After returning to the Netherlands in 1598, an account of the voyage was published by Willem Lodewijcksz, who had been a clerk on board the Mauritius. This chart, which celebrates the achievements of the Dutch fleet, was originally intended to be published in this account. However, it was hastily suppressed by the merchants that financed de Houtman’s expedition, who feared that its unique and up-to-date information, could be utilised by potential competitors. It seems that this was a last- minute decision, as Chapter 18 of the account still states that ​“here follows the chart of Java and Sumatra”. However, the precaution was too little too late, as the very same year, Theodor de Bry published a smaller chart based on Lodewijcksz’s, to be inserted into his ​‘Petits Voyages’. De Bry’s example does, however, contains a degree error, which means the northern coasts of Java and Bali lie one degree further north than they do on Lodewijcksz’s map.
Rarity
Due to the chart’s suppression by the Dutch merchants, the work is exceedingly rare with only sixteen known institutional examples. Only two of those examples are contained in non-European institutions: The James Ford Bell Collection, Minneapolis, and the State Library of New South Wales, Australia, which is the only example in the southern hemisphere.

This particular example belonged to map-collector and cartobibliographer Rodney Shirley, who acquired it as part of a unique pre-Overton atlas, in the mid twentieth century. 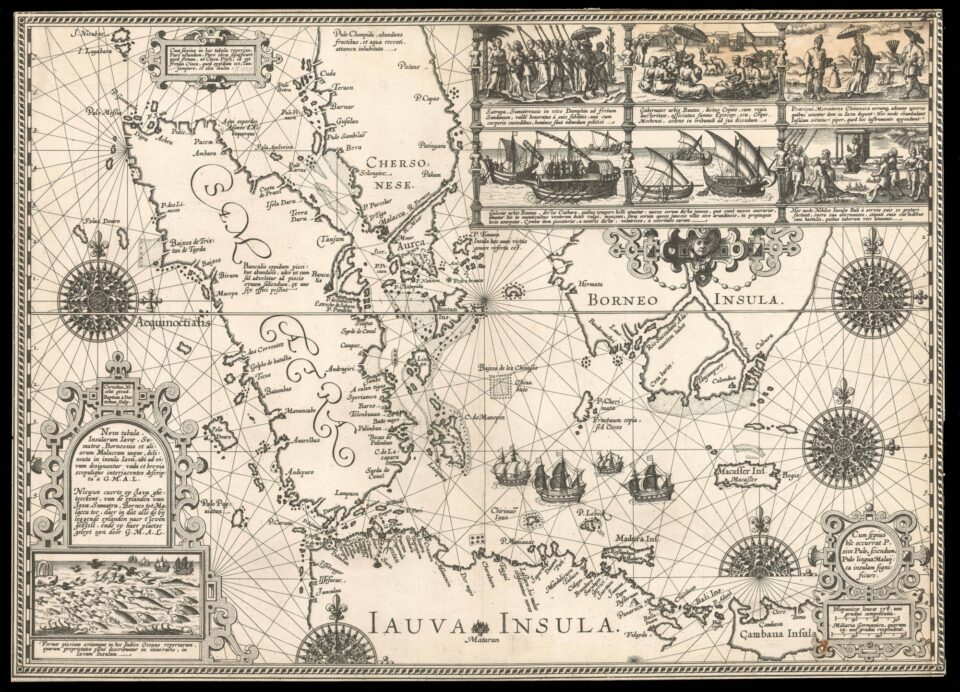