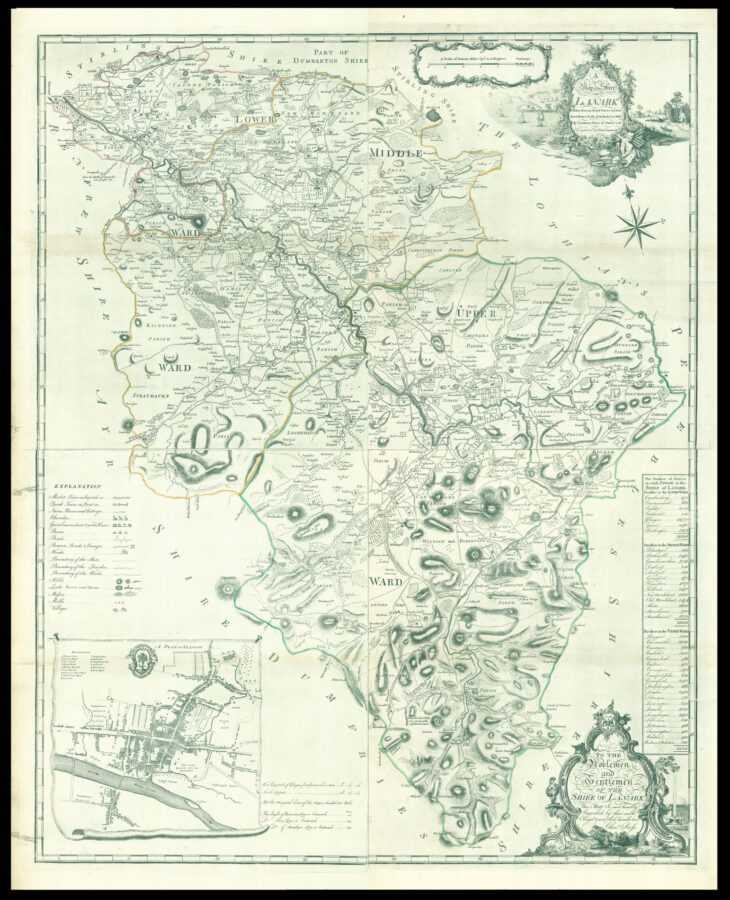 A Map of the Shire of Lanark Taken from an Actual Survey and laid down from a Scale of an Inch to a Mile by Charles Ross of Greenlaw & Engraved by Geo. Cameron.

A map of the historic county of Lanarkshire, now absorbed into Strathclyde. The title cartouche is surrounded by symbols of the arts and industry, and shows ships to the left, a reference to the importance of the River Clyde in the shipbuilding industry and imperial trade. At the lower right there is a table showing the population in each ward of the parish, above an elaborate dedication cartouche surmounted by the Lanark coat-of-arms. At the lower left there is an inset map of Glasgow, drawn to look like it is pinned to the larger map.

Charles Ross (1722–1806) was originally a factor on the Hawkehead estate, but worked as an architect, designed a building on the Ardoch estate, and as a surveyor and mapmaker, probably self taught. He nevertheless built up a solid client base, drawing estate plans for several of the local noblemen and gentry, including Sir James Colquhoun of Luss.

Land surveyors played an important part in changes to the agricultural landscape, including the move from infield-outfield systems to a more geometrical field pattern (Adams). After the Anglo-Scottish Union in 1707, Scottish estates increasingly adopted English agricultural practices. Instead of irregularly dividing the land between grazing grounds and crop land, estates were divided into regular fields with well-defined boundaries, making the land both easier to work and more productive. This redefinition of property boundaries required the skills of a surveyor, who could show both the structure of the landscape and any relevant details which might affect the productivity or use of the land.

There are copies held in the University of Glasgow, National Library of Scotland, and the British Library.