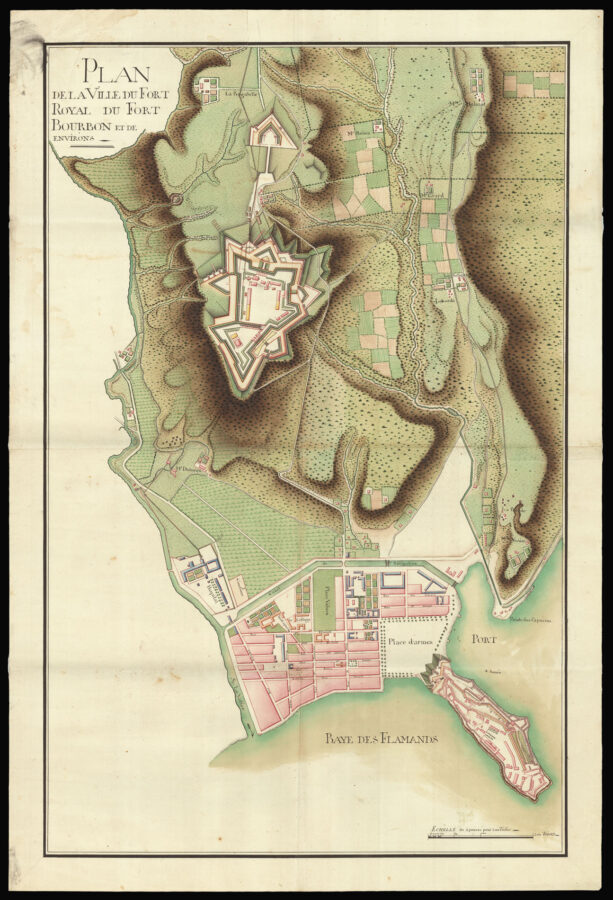 Donatien-Marie-Joseph de Rochambeau arrived in Martinique to become governor in January 1793, and he probably commissioned this map that year. After the Revolution of 1789, France had an uneasy relationship with its colonies. The National Convention had voted to extend citizenship to all people living in French territories: Rochambeau was there to enforce this ruling, but was prevented from landing in Martinique the year before by planters and royalist sympathisers who refused to countenance giving people of colour citizenship, even though slavery had been preserved. In the same month that Rochambeau arrived, France declared war on Great Britain, and the white planters made agreements with British agents to declare British sovereignty. Great Britain invaded in June that year with a force of 16,000 to Rochambeau’s 900 men. He won an audacious victory when he attacked their troops at night, but the British had the support of the planters, and by March 1794 they held the island. Rochambeau was taken prisoner and held in Philadelphia in the United States for over a year, until he was returned to France in an exchange of imprisoned officers.

Fort Royal, now Fort-de-France, is the capital of the island. Fort Bourbon was built by Louis XV after Martinique was attacked in 1762, and named in his honour.

Donatien-Marie-Joseph de Vimeur, vicomte de Rochambeau. From the library of the Rochambeau family.