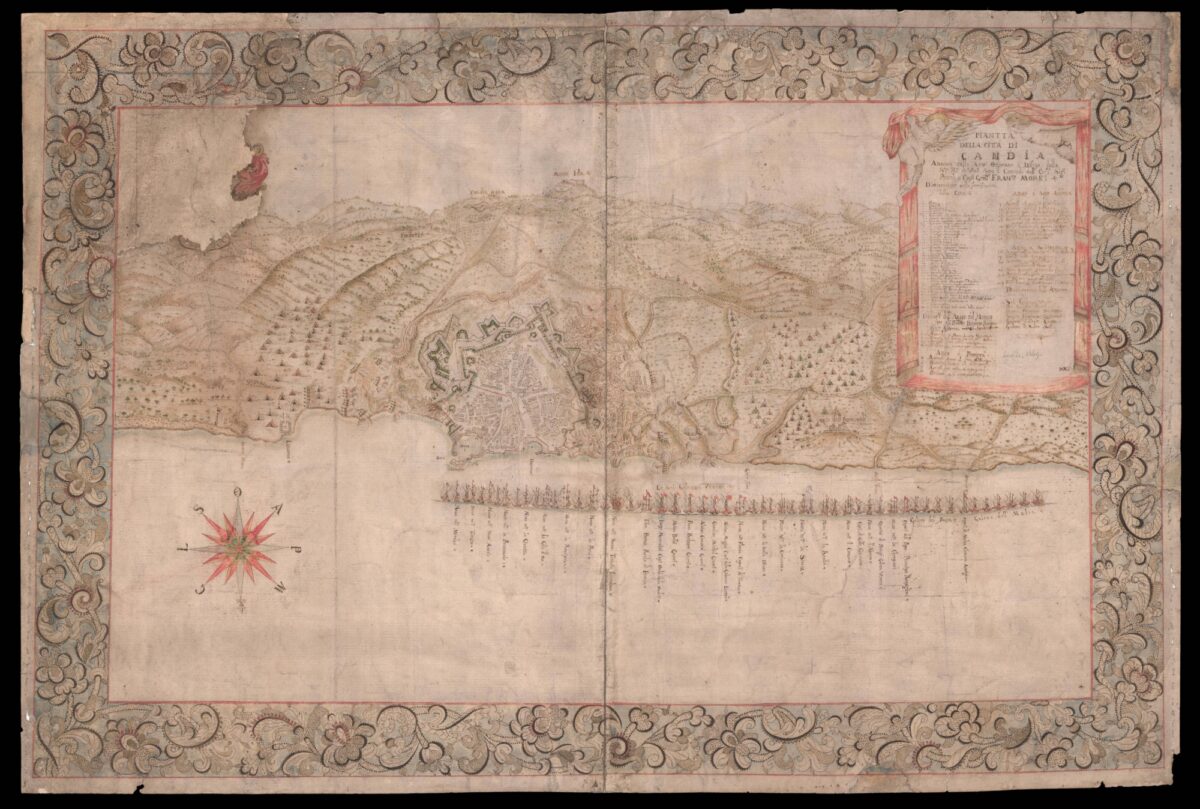 A superb bird’s-eye view of central Crete, shown during the final struggle for control of the island in June of 1669 after nearly 22 years of conflict between its Venetian defenders and its Ottoman attackers. The outcome of this endgame was the concern of the whole of Christian Europe, not just that of its Venetian rulers.

The Siege of Crete, as part of the fourth Cretan War lasted for 22 years, 1648–1669, and was waged between the defending Serene Republic of Venice and the attacking forces of the Ottoman Empire, who were ultimately victorious. This anonymous, beautiful and extremely detailed birds-eye view of the central part of the island is oriented to the south, with the city of Candia, now Heraklion, in the forefront and Mount Ida on the horizon. Coastal place-names are mostly placed at right-angles in typical portolan style; inland, castles and towns are named, roads and rivers are shown, and invading Ottoman troop positions are depicted exploding with fire-power, and are noted and named in the key. However, it is the fortified city of Candia that dominates the centre of the view, and is shown surrounded by the tents of the Ottomans on all sides. Off-shore are arraigned the ships of the Venetian navy and their allies, which include galleys from the Knights of Malta, from the Pope, France, and no less than 27 other named Italian noble states and kingdoms, including the Medici family. The whole is surrounded by a broad border decorated with an elaborate and intricate design of acanthus leaves and flowers.

The key to the map, and a comprehensive list of the participants, both Venetian and Ottoman, appears within the curtained title cartouche upper right, held aloft by two cherubim. The most illustrious name amongst them is the leader of the Venetian forces, Francesco Morosini (1618–1694), who rose to prominence during the many years of conflict with the Ottomans, and became one of the greatest military leaders of the war. He was commander-in-chief of the Venetian fleet from 1657, and in 1667 was sent to relieve the besieged island of Crete. Within two years the city of Candia had surrendered completely to the Ottomans. This map shows the last significant effort by Morosini to win back the island.

In June of 1669, Louis XIV of France sent 6000 soldiers commanded by the Marquis of Noailles and the Duke of Beaufort, and their galleys can be seen in this map in the waters off the city of Candia. Unfortunately Beaufort was soon missing in action, and the French lost the prize of their fleet, the ​“Therese”, to an accidental explosion, an event which is recorded in this map in fiery detail. Shortly thereafter the French abandoned the enterprise, leaving Morosini with very little support. By August of 1669 there were only about 3000 Venetian troops in the city. A council of war was declared by Morosini and on August 30th he formally surrendered and entered into peace negotiations. A treaty was signed in September of 1669, Candia was evacuated and almost 500 years of Venetian rule came to an end.

Morosini stood trial for treason and cowardice but was acquitted, eventually absolved of blame and re-instated as commander-in-chief when war with Ottomans resumed in 1684. In a complete turn-around of fortune Morosini was elected Doge of Venice in 1688.

The unknown author of this view, who has signed himself as ​“ZX” in the title cartouche, was clearly informed, especially in terms of perspective, by the comprehensive maps of his predecessor Francesco Basilicata, whose manuscript atlas of Crete, 1612, is housed in the British Library. The topography is more similar to that of Marcho Boschini’s map ​“Citta di Candia”, published in his ​“Il Regno Tutto di Candia” of 1651, although the present map is far superior in detail.