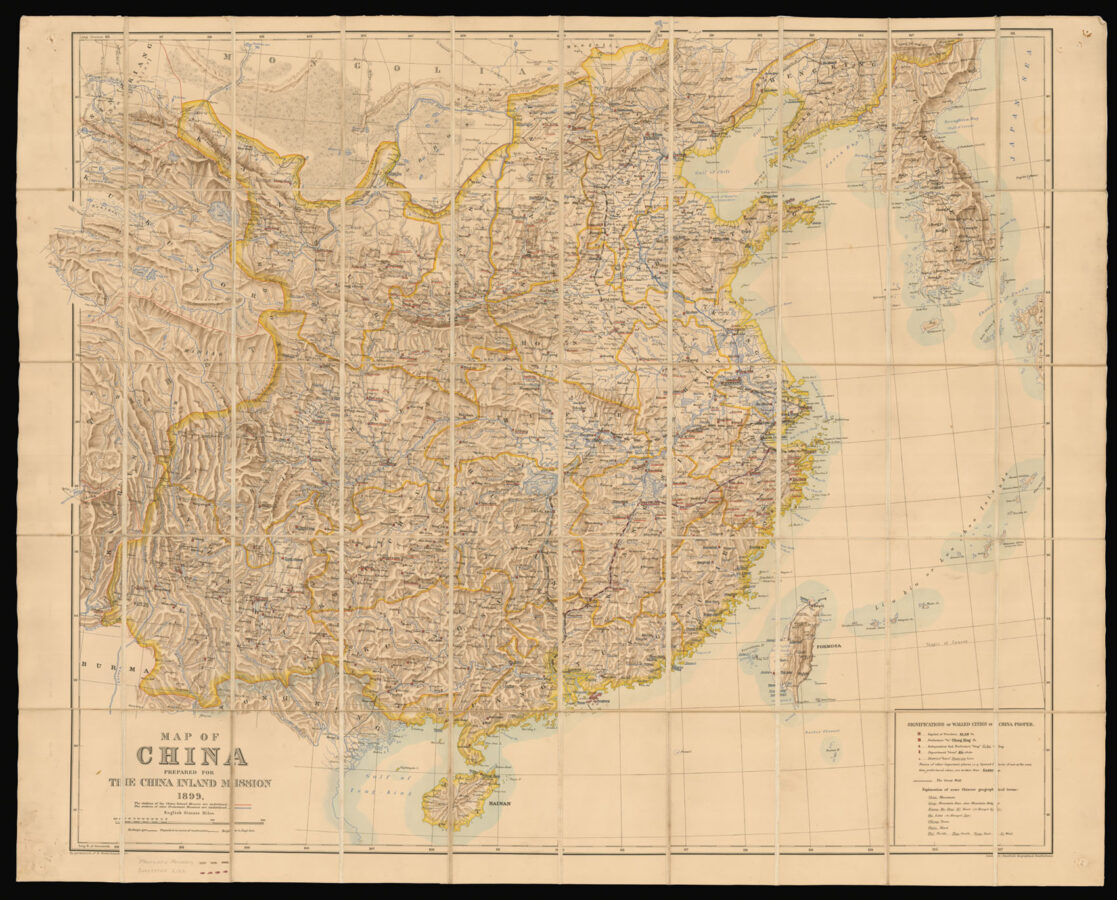 Map of China prepared for the China inland Mission 1899.

Large and detailed map of the Christian missions within China.

The map depicts two types of Christian missions: the China Inland Mission (underlined in red), a Protestant mission set up by Hudson Taylor in 1865; and other Protestant Missions (underlined in blue). As well as showing the distribution of the the Christian missions throughout China, the map also depicts cities, prefectures, independent sub prefectures, departments, districts, towns, markets, montains, mountain passes, rivers, and lakes; together with railways constructed and proposed.

The map is the work of Emil Bretschneider (1833–1901), a Russian Doctor of German Baltic descent who graduated from the University of Dorpat (Estonia) medical school and initially served as physician to the Russian delegation in Tehran. From 1866 to 1883, he served as physician to the Russian delegation in Beijing. Shortly after his arrival in the Chinese capital, Bretschneider became immersed in Sinology. He quickly realized that most western Sinologists were too reliant upon poor second hand translations of Chinese source material, leading to severe misinterpretations of Chinese knowledge and philosophy. While in Beijing, he availed himself of the Library of the Russian Ecclesiastic Mission and undertook his own study of Chinese literature, most notably botany and geography. Additionally, Bretschneider was able to use his connections to the Chinese Government as well as various commercial and ecclesiastical institutions in order to access the finest geographical sources for use in his maps.

In 1898 he published in St. Petersburg, a six part set of maps of China, all of which are very rare. The present map, issued in St. Petersburg, in 1900, represents the culmination of over 30 years of Bretschneider’s work on the cartography of China and is one of the finest maps prepared during the twilight years of the Qing Dynasty. It was issued by the A. Ilyin, Russia’s leading map publishers, in an effort to access the large American and British Imperial markets.