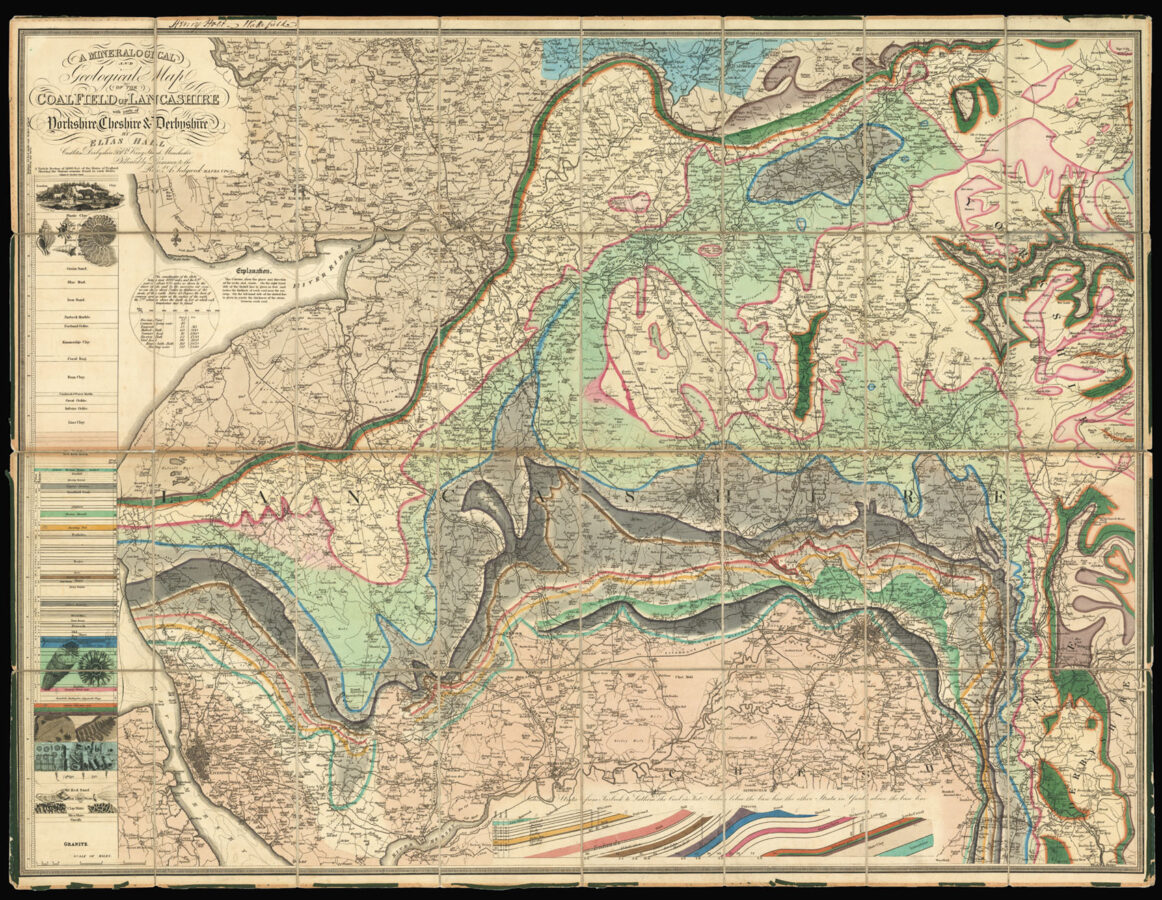 A Mineralogical and Geological Map of the Coalfield of Lancashire with parts of Yorkshire, Cheshire & Derbyshire by Elias Hall.

One of the earliest large-scale geological maps.

In 1834, Elias Hall published the present work, one of the first, if not the first geological map to be published on a scale of one inch to one mile. The map is dedicated to Adam Sedgwick Vice President of the Geological Society, and is coloured in similar fashion to William Smith’s 1815 map of England and Wales, with dense colours marking the lower outcrops (bassets) of the coal seams and other units, and with the colour then fading down dip. To the left of map is a column of 15,000 feet of the strata then known (with names taken largely from Smith and Farey) with units ranging from the Bagshot Sand [Eocene] down to the Old Red Sandstone [Devonian] and Transition Limestone [Silurian], with Mica Slate, Gneiss and Granite beneath. The sequence of coals is fairly accurate, but there are minimal details of the Millstone Grit and Carboniferous Limestone. Some sketches of typical fossils were superimposed in the column. The London Clay has a sketch of an elephant, horse, rhinoceros, giraffe and two humans, which are now assigned to the then unrecognised Quaternary.

Elias Hall (1764–1853) was a pioneering Midlands and Lancashire geologist. Little is known regarding Hall’s early life, he is first mentioned in 1796, in the cash book, of a marble worker White Watson, where he is said to be ​“Elias Hall, Castleton stone dealer”. It wasn’t until 1807 with the arrival of John Farey, William Smith’s most important pupil, that Hall began to realise the important practical aspects of the geological stratigraphy forwarded by Smith. Over the next ten years Farey and Hall would work closely, with Hall producing several scale models from Farey’s surveys. It was through Farey that he would make contact with Joseph Banks, and later George Greenough, president of the Geological Society in London. However, Hall was to be the victim of a bitter dispute between Greenough and Farey, the former having refused to publish Farey’s detailed geological survey of Derbyshire. Furthermore, Greenough went on to describe Hall’s model of the Darbyshire dales, with its rather garish colours, as more akin to ​“a tray of Guts and Garbage in a Fishmonger’s or Poulterer’s Shop”. Hall did, however, receive praise from both Joseph Banks, and Charles Koenig, curator of minerals at the British Museum, who when he took a month’s vacation in Derbyshire, in 1819, visited Hall in Castleton. There he ordered two of Hall’s models of the topography of Derbyshire and Cumberland. Hall continued to publish geological material throughout the 1820s, most notably his works depicting the geological sections of the Lancashire coalfields. It was at this point that he begins to call himself a mineral surveyor. In the 1830’s he not only published the present work, was involved in the coal industry, and became a founding member of the ​‘British Association for the Advancement of Science’. He continued to be active in geological circles right up to his death in 1851.

Ownership inscription on slipcase and map of Henry Holt, of Wakefield, West Yorkshire, a civil engineer and member of the ​‘British Association for the Advancement of Science’.