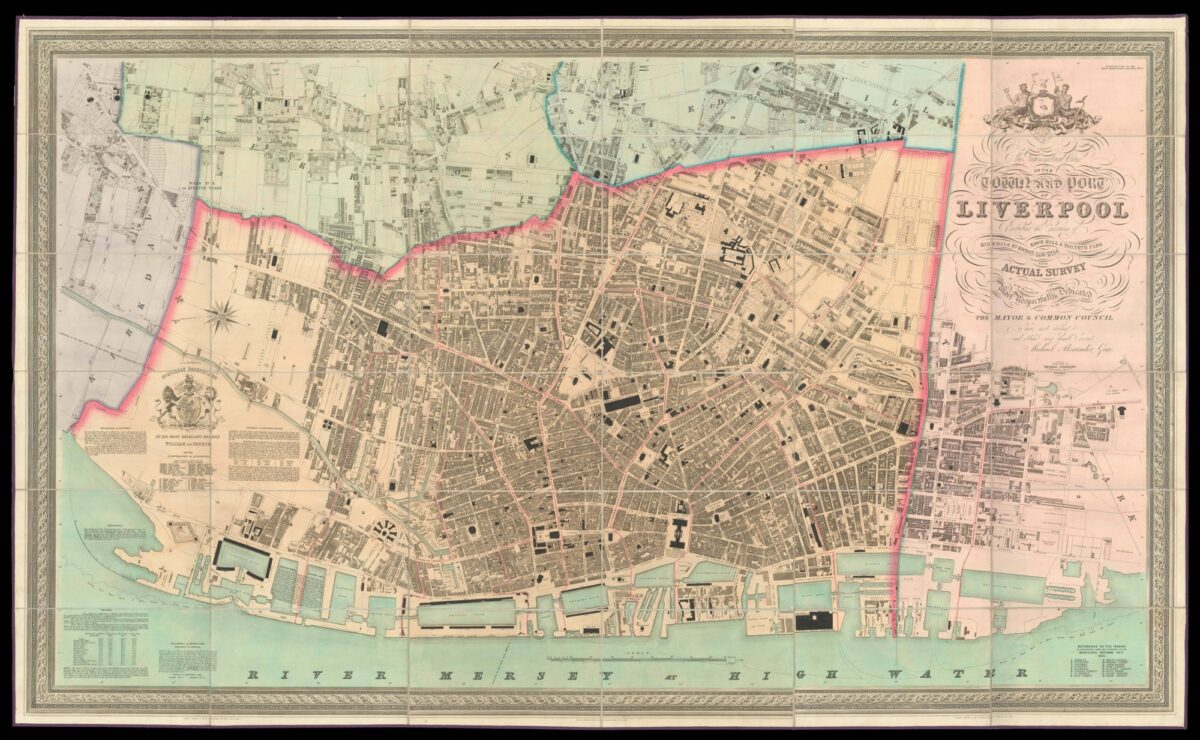 [Lancashire] This Trigonometrical Plan of the Town and Port of Liverpool including the Environs of Kirkdale, Everton, Low Hill & Toxteth Park from Actual Survey is By Permission Most Respectfully Dedicated to the Worshipful Mayor and Common Council by Their Most obedient and obliged Humble Servant Michael Alexander Gage.

An outstanding example of the finest nineteenth century plan of Liverpool.

​“The principle of this plan is to exhibit from actual admeasurement al the Roads, Streets, Lanes, Alleys, and Passages, comprised within its boundary; also ever House, Warehouse, Outbuilding, Garden, Court &c. The Docks, Basins, Quays, Ferries, and Landing Places are described on their respective sites; the Churches, Chapels, and Public Buildings including the Banks, Hotels, and Principal Inns, are shaded in Black, and each of them properly designated on the spot. The lengths of the Street, are given in yards, and, where their respective sides are unequal the extant is expressed by a line taken in the centre of each.

The survey is completed with the utmost practicable accuracy up to the 1st day of October 1835, and it is confidently expressed that every House &c. existing within the limits thereof at the date, will be found faithfully delineated thereon. Should however any minute errors have unavoidably escaped notice, they will be most assuredly be so extremely insignificant as not to affect the character of the work for its general accuracy and great utility”.

So proud was Gage about his new plan that he described it, not without justification, as ​“the most perfect map”.

Michael Alexander Gage was a civil engineer and land surveyor working in Liverpool at the beginning of the nineteenth century. Apart from the present work, Gage is best remembered as one of the Liverpool based Freemasons who, unsuccessfully, lead a rebellion against the Grand Lodge in London, at the beginning of the 1820s. He would later campaign against the Corporation of Liverpool’s decision to pipe water into the city from Rivington Pike reservoirs, arguing that there was sufficient water within the city. He was later jailed for doctoring a petition to Parliament showing a great deal of Liverpool rate payers were against the scheme. He would subsequently find himself in debtor’s prison.