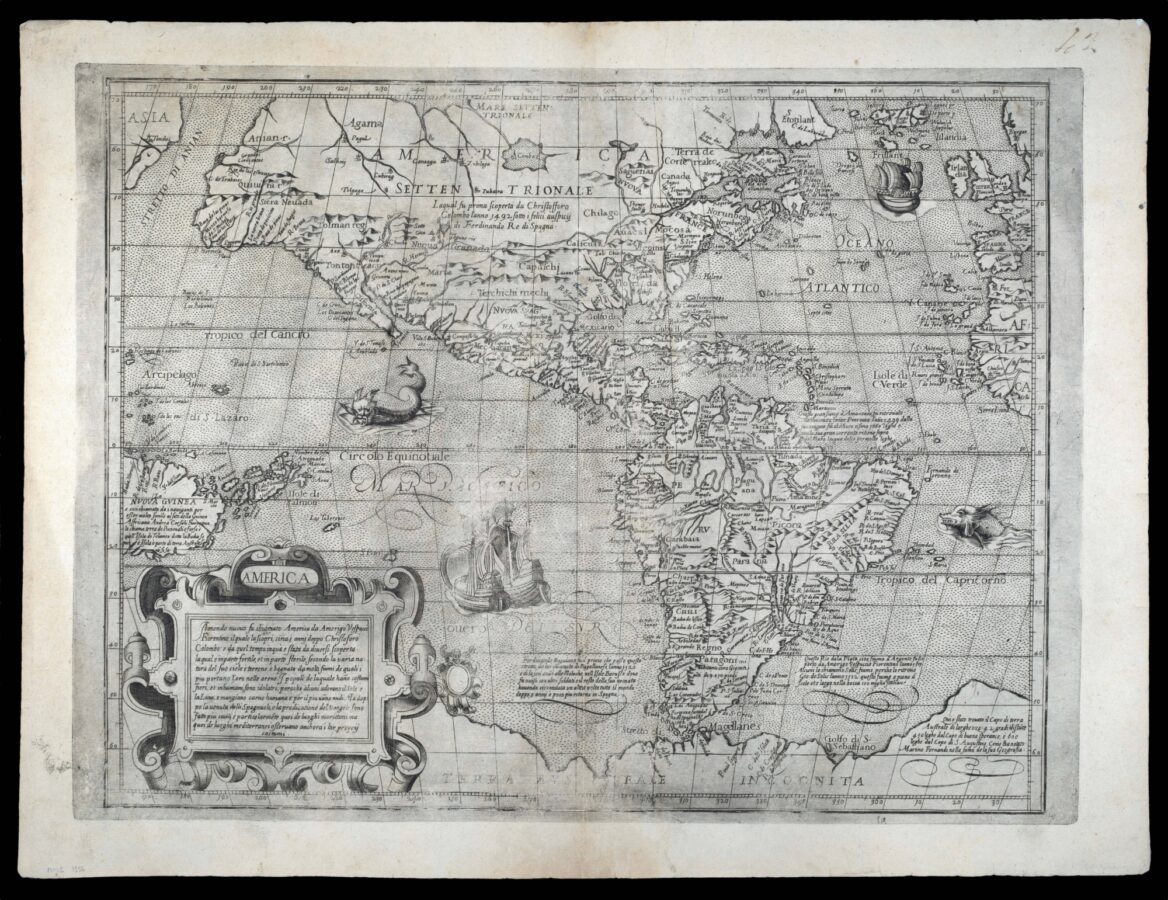 Lafreri school map of the Americas

A separately-published Lafreri school map of the Americas, the Pacific and Atlantic Oceans, extending to Asia in the west, and Europe in the east with a large land mass labelled ​‘Terra Australis Incognita’ in the south. It is decorated with sea-monsters, a large galleon, and a fine mannerist strapwork cartouche.

The map is derivative of Arnoldo di Arnoldi’s c1600 map of the same title. Van Schoel’s map is detailed and mostly accurate. For example, California is correctly shown as a peninsula, and New Guinea as a separate island; however, Terra Australis, the great unknown south land, awaits discovery. To cover up his lack of knowledge of southern geography, Terra Australis is partially and cleverly covered by the title cartouche.

Burden notes that there are a few minor differences between this map and Arnoldi’s. For example, in van Schoel’s cartouche the letters ​‘M’ and ​‘E’ are not ligatured and the coat of arms is left blank. Additionally, the place name ​‘S. Augusti’ in the east of North America has been omitted, and the Pacific Islands labelled ​‘Baxos de S. Bartolomeo’ are named but inexplicably left out.

Copies of this map are very rare. In fact, it was unrecorded until Philip Burden acquired a copy in a composite atlas in 1992. Burden was then able to determine the map’s author and date of publication by using an inscription on a map of Europe (also derived from Arnoldi) that appeared in the same atlas. Since then, four apparently different copies of this map have been sold at auction (according to ABPC). Taking Burden’s copy into account with those sold at auction, this is only the sixth example of the map that is known to exist (and the one with the widest margins). Furthermore, we are unable to locate an example of this map in any institutional collections.

Arnoldi (d.1602) was a Flemish-born cartographer, who lived for the last part of his life in Italy, mostly in Bologna, where he worked for Giovanni Antonio Magini. In early 1600 he is known to have moved to Siena, where he produced his most famous works: a large ten-sheet map of the world, and a set of the continents. For his map of the Americas, Arnoldi improved on Ortelius’ model and borrowed from Giovanni Battista Mazza’s map of c1589, and Petrus Plancius’ wall map of the world of 1592.

Van Schoel was an engraver for Antonio Lafreri, arguably Italy’s most influential and successful commissioner and publisher of maps.