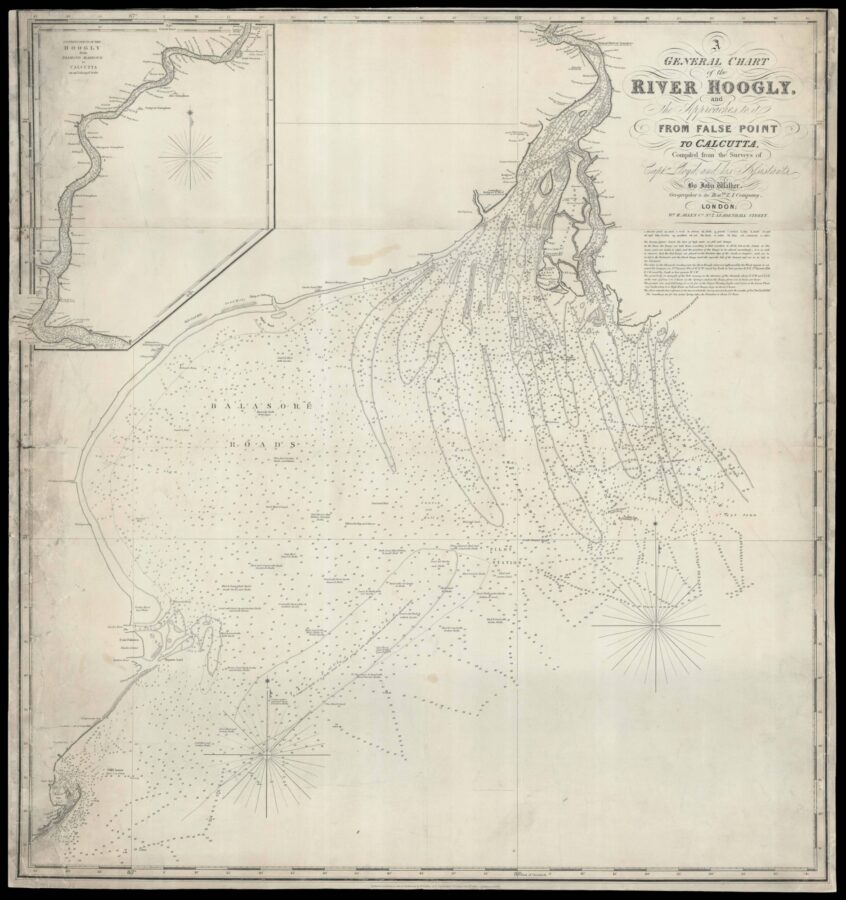 Kolkata and the Hoogly River

A General Chart of the Hoogly River and the Approaches to it from False Point to Calcutta Compiles from the Surveys of Captn. Lloyd and his Assistants. By John Walker, Geographer to the Honble. E. I. Company.

This rare map of the Hooghly River shows the river weaving through West Bengal from Kolkata, shown as an inset map, down to False Point harbour in the Bay of Bengal. The large delta is displayed prominently, complete with soundings, sailing instructions and notes on the quality of the river-bed beneath. As a navigable distributary of the Ganges, the Hooghly was of great importance in trade and communications, and after the Seven Years’ War (1756–63), the English East India Company emerged as the dominant power on the river. The British soon established themselves at Calcutta, furnishing the settlement with distinctive European features, such as the fort shown on the inset map and labelled ​“Fort William”. Local towns situated on the river were ​“looked upon as healthy suburban retreats by the Europeans in Calcutta” (Klein), explaining the great level of detail in which these settlements along the Hooghly are shown on this chart. In the latter half of the nineteenth century, however, these ​“healthy suburban retreats” were struck by malaria epidemic which may have reduced their populations by as much as half. Upon investigating this phenomenon, a British civil surgeon concluded that the East India Company’s efforts at agrarian improvement may have prompted the influx of mosquitoes. While farming around the river had previously been small-scale but reliable, the British had attempted to make changes that would avoid the inevitable damage suffered during the monsoon floods. Further changes were also made to local industry around this time, with the East India Railway line along the Hooghly opened in 1854.

This map was made by John Walker from the surveys completed by Captain Lloyd. Walker was a London-based mapseller, engraver, lithographer, hydrographer, geographer, draughtsman and publisher, who worked with both nautical charts and geographical maps. He followed in his father’s footsteps as an official hydrographer of the British East India Company, and was consequently tasked with the production of a wide range of navigation materials, including Belcher’s important map of Hong Kong and Carless’ exploratory map of Karachi.