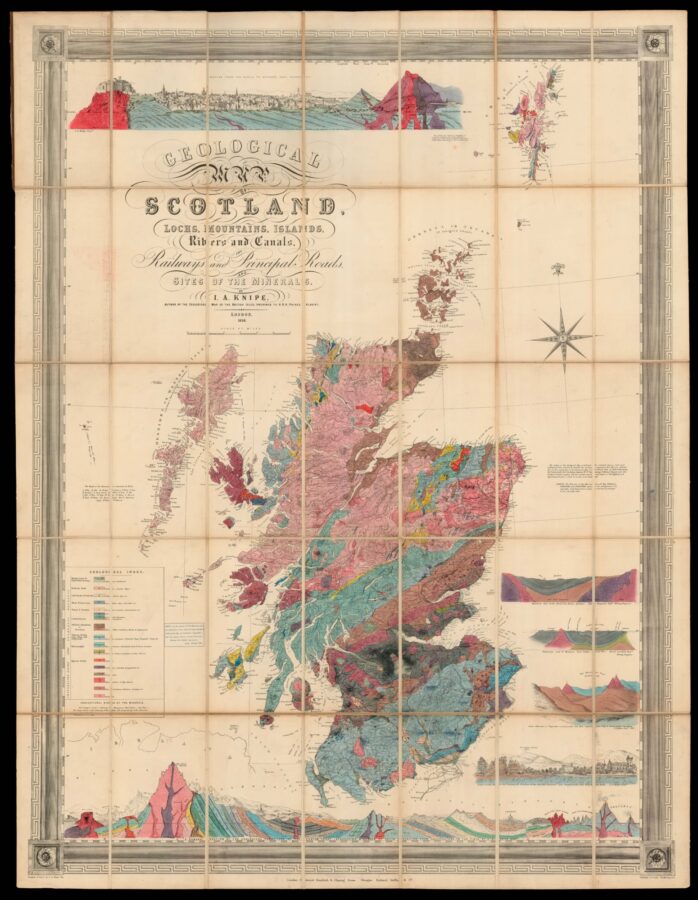 Geological Map of Scotland Lochs, Mountains, islands, Rivers and Canals. The Railways and the Principal Roads and the Site of the Minerals, by J. A. Knipe. Author of the Geological Map of the British Isles, Inscribed to H.R.H. Prince Albert. 1858.

To the left of the map is an extensive key providing information upon geological composition, including marsh, shale, limestone, several sandstones, coal, clay, slate, quartz, granite, and porphyry, iron, copper, and lead. Below the map the is a section of geological formations, stretching from the Isle of Lewis to the Isle of Wight, and including examples of Hypozoic, Alaeozoic, Mesozoic, Cainozoic, and Volcanic formations. Other sections include the River Jed, The Maidens Paps Roxburgh, Pittenween and St Monance coal fields, Muirkirk coal field, and a section from Edinburgh Castle to Arthur’s Seat.

The present map ​“was the first large-scale geological map of Scotland to have appeared since Macculloch’s 1836 map, and the first attempt to bring together the wealth of detailed geological information that had appeared (primarily in the ​‘Prize Essays and Transactions of the Highland Society of Scotland’) during the intervening twenty-six year period since Macculloch completed his mapping in 1832” (Toland).

The map was generally favourably received at the time with ​‘The Glasgow Herald’, 23rd February 1859 noting: ​“Both the geographer and geologist will find Mr Knipe’s map deserving of their attention… [the map] supplying a desideratum in Scottish geology”. Knipe would later go on to published revised editions in 1859, 1861, 1864, and 1878. However, despite theses efforts it would appear — due to the few surviving examples — that the map was not a commercial success.

First edition; the title bears the date 1858, although the imprint bears no date, a pasted on printed label to the right of the key reads: ​“Note: it is the opinion of Sir R Murchison, that the sedimentary rocks of the N.W. from Cape Wrath to Sleat-point, Skye, are Cambrian (Greywacke), their true position, however, is under discussion. Meeting of the British Association, Leeds, 28th Sepr., 1858.”. The absence of an imprint date suggests an early impression of the map.