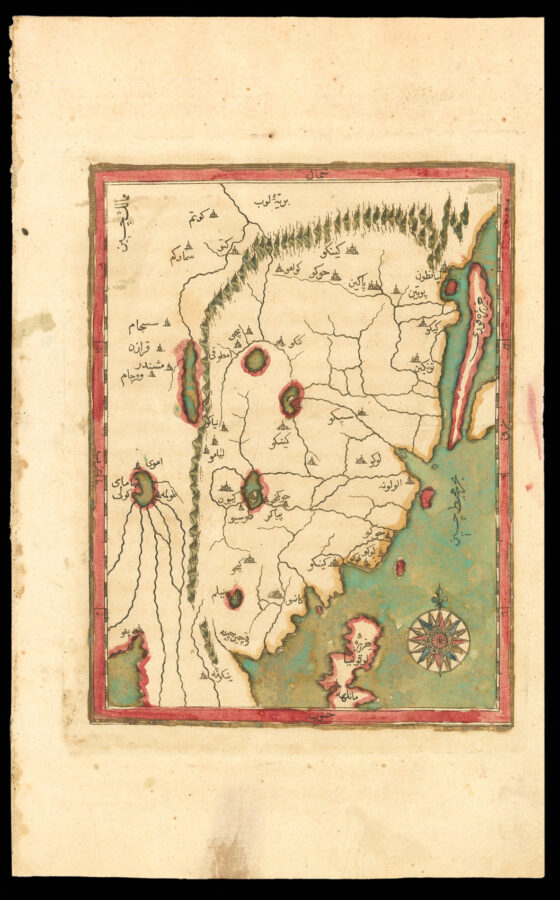 Fine example of Katip Celebi’s rare map of China and Korea, from his Jihan-numa, published in Istanbul in 1732, which also included the first map of America published in the Ottoman Empire.

Kâtip Çelebi, Mustafa bin Abdullah, Haji Khalifa or Kalfa (1609 – 1657), was an Ottoman scholar, historian and geographer, who is regarded as one of the most productive authors of non-religious scientific literature in the seventeeth century Ottoman Empire.

He was an avid bibliophile, an industrious scholar, and a prolific and straightforward writer. Celebi began work on an atlas of maps, which was not completed and published until 1732, by Müteferrika, due to the continuing ban on printing in the Ottoman Empire.

The Cihannüma of Katip Celebi from the printing house of Ibrahim Müteferrika was printed in Istanbul in 1732. Müteferrika’s press was the first Islamic printing house. The introduction of printing in moveable type was slow to develop in the Middle East. The very earliest examples of printing in Arabic script date from early sixteenth century Europe, where religious texts were printed, especially by Italian printers. Some early Arabic religious texts were also printed from presses in Christian communities in the Middle East, but it was not until the early eighteenth century that printing in Arabic script by Islamic printing houses in the Islamic world was officially authorized.

Together with Said Efendi, Müteferrika was granted permission to print books in Ottoman Turkish in Arabic script. The presses and typefaces were obtained from local Jewish and Christian printers and later imported from Europe. Ibrahim Müteferrika became director of the first Turkish printing press. The first book, a dictionary, was printed in 1729. Religious texts were officially excluded as they continued to be copied in manuscript form only. There was a vested interest among the local scribes and calligraphers to prevent the growth of printing. The cursive design of Arabic script lent itself particularly well to manuscript production and the manuscript workshops presented a constant opposition to Müteferrika’s enterprise.

Back in Istanbul, however, the printing activities did not last and came to an end in 1743, due to strong opposition of the local scribes to Müteferrika’s enterprise. He died in 1745, after printing works on grammar, geography, maths and, above all, history; books from his press are often known as the ​‘Turkish incunabula’. But this change was not long-lasting and printing houses eventually grew up in other Middle Eastern cities. Eventually even the ban of printing religious texts was lifted and the first printed Qur’an texts appeared in the 1860s.