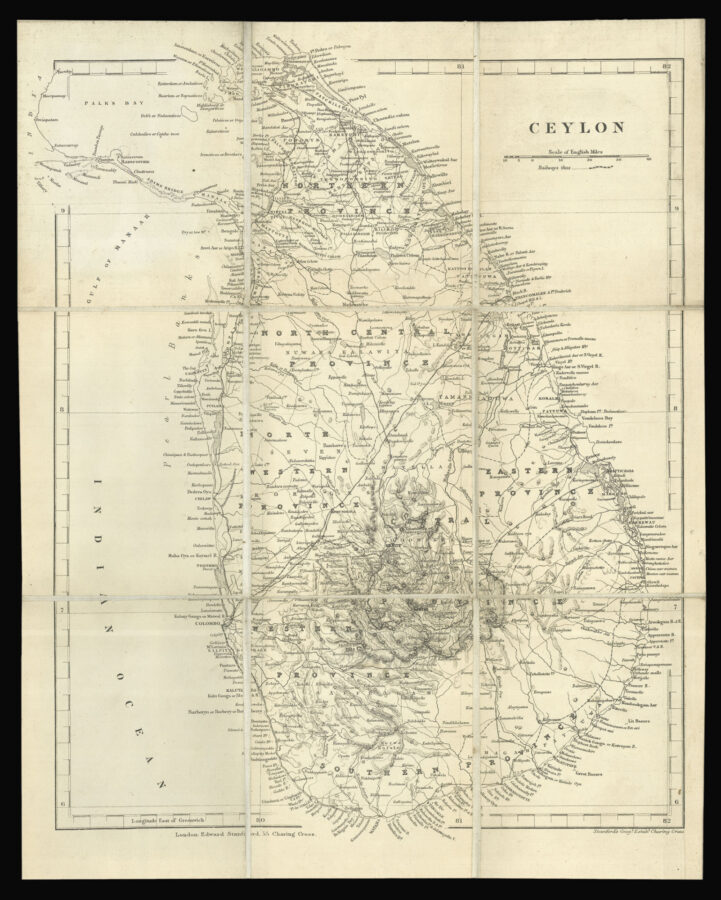 A rare uncoloured copy of Stanford’s map of Sri Lanka, based on the earlier work of Aaron Arrowsmith.

In 1795, the British occupied Dutch possessions in Sri Lanka out of fear that French control of the Netherlands would result in their controlling the strategically important port of Trincolmanee. Initially the British encountered little resistance to their occupation and they soon controlled most of the Dutch territory, which covered the whole of the low-lying Sri Lankan coast. British possession would later be enshrined at the Treaty of Amiens of 1802.

For the previous two centuries, the island’s interior was controlled by the Kingdom of Kandy, which had lived in uneasy and sometimes violent peace with the previous colonial incumbents, namely the Dutch and the Portuguese. This uneasiness continued and, in 1803, the first Kandyan War broke out when the British marched into Kandyan territory. Although they successfully occupied the capital Senkadagala (Kandy), resistance was stronger than expected and the army, weakened by disease, was resoundingly defeated. The war would continue for another two years with neither side gaining the decisive victory; it would not be until 1815, when the British were invited in to overthrow the Sri Vikrama Rajasingha, that they would gain control of central Sri Lanka.

In 1805, English cartographer Aaron Arrowsmith responded to the British-Kandyan conflict with a map of Sri Lanka, or ​‘Ceylon’. Arrowsmith’s son John would continue to update and reissue the map up until 1862 , the year after Arrowsmith’s retirement. Following his death in 1874, his plates were acquired by Edward Stanford, who continued to publish the map until the 1940s.

Stanford included the map of Sri Lanka in his ​‘London atlas of universal geography exhibiting the physical and political divisions of the various countries of the world’, a hugely successful work containing one hundred maps with a list of latitudes and longitudes. Later editions were revised by his heirs, the maps updated with the latest information. The present example is rare: we have been unable to trace another example of a Stanford map of Ceylon that is uncoloured.