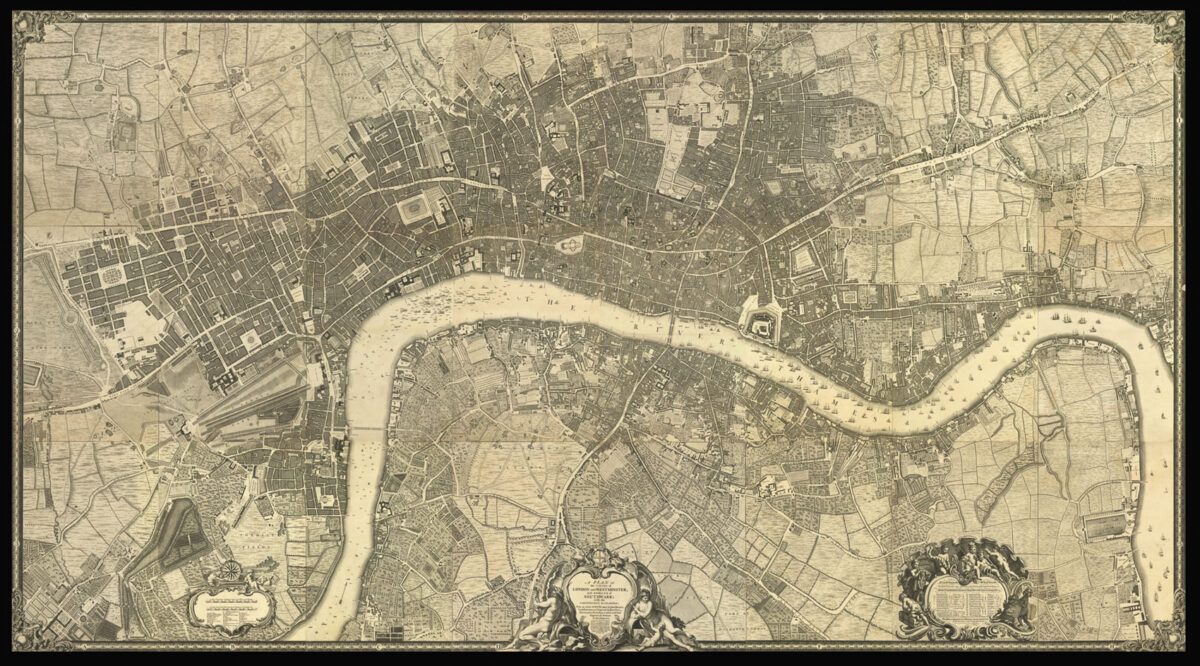 It would appear that John Rocque, a French Huguenot, emigrated with the rest of his family to London in the 1730s, where he began to ply his trade as a surveyor of gentleman’s estates, and with plans of Kensington Gardens, and Hampton Court. However, in 1737 he applied his surveying skills to a much great task, that of surveying the entire built-up area of London. Begun in March of 1737, upon a scale of 26 inches to one statute mile, the map would take nine years to produce, eventually engraved upon 24 sheets of copper and published in 1746. The plan stretches west to east from Hyde Park to Limehouse and north to south from New River Head to Walworth.

The map was supported by both the Royal Society and the City of London Corporation, and was carried out using the most accurate surveying techniques of his time. In accordance with his aim for accuracy, Rocque has dispensed with the three-quarter or birds-eye views, and gives us instead an elegant plan with rococo flourishes left for the border and the three cartouches that adorn the bottom of the map. The work abounds with information, including public buildings, churches, chapels, almshouses, workhouses, hospitals, lunatic asylums, parks, pleasure gardens, squares, bridges, docks, fields, and lakes.

The work was published by John Pine and John Tinney. John Pine (?1690–1756), who also engraved the work, was generally agreed to be the finest engraver of his day. Apprenticed to the silver engraver John Roy Arnold in 1709, he was a friend of William Hogarth. John Tinney (d.1761) was, like Pine, an engraver, and is now best known as the teacher of other fine English engravers such as John Browne, Anthony Walker, and William Woollett.