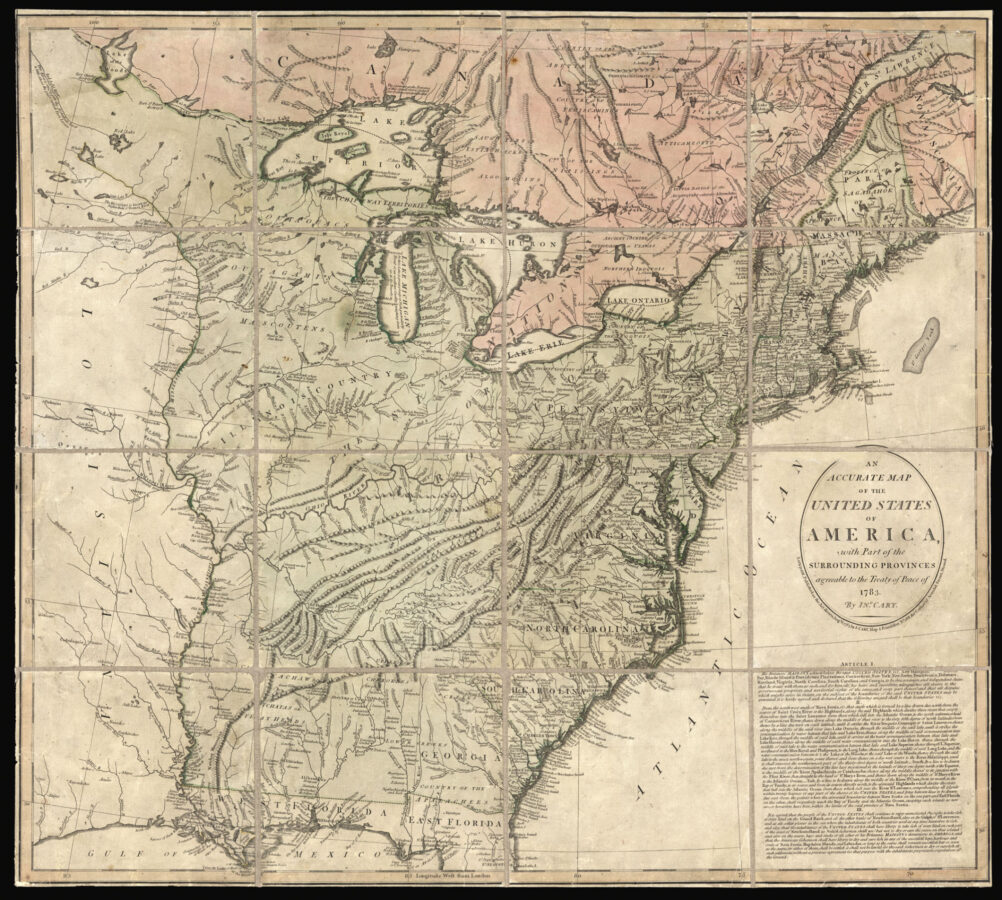 John Cary’s first map issued under his own imprint, and one of the first maps in English to name the United States

An accurate Map of the United States of America with Part of the Surrounding Provinces agreeable to the Treaty of Peace of 1783. By In’o. Cary

John Cary’s first map issued under his own imprint, one of the first maps in English to name the United States, and to show the influence of Jonathan Carver’s discoveries on the final shape of the new republic, one month before the Treaty of Paris was ratified.

​“This is probably the second map of the United States on a new plate specially engraved for the purpose, as distinguished from maps adapted from old plates of the British possessions in America. The Kendall Collection description is incorrect in indicating this Cary map as the second with the title, United States, printed in English. According to T. Chubb’s Maps of Somersetshire, 1914, p. 60, Cary only commenced work as a map publisher in or about 1783, hence this must be one of his earliest productions” (Streeter).

The Declaration of Independence, signed on July 4th 1776, was headed ​‘The Unanimous Declaration of the Thirteen United States of America’. In the Articles of Confederation, signed in late 1777, the name ​‘The United States of America’ was adopted for the new republic, and shortly thereafter the Robert de Vaugondys reworked their 1755 map ​‘Carte des pays connus…’ of North America and published it with a new title ​‘Carte du Canada et des Etats-Unis de l’Amerique’, now acknowledged by most to be the first map to use the new name for the new republic, albeit in French. William Kneass’ map ​‘A map of the United States and part of Louisiana’, which the Library of Congress and McCorckle date to 1780, might be the first map to name the United States in its title, in English.

Great Britain formally accepted the United States of America as an independent entity with the signing of the Treaty of Paris on 3 September 1783. One month before the treaty was ratified, Cary’s map is the first to show the shape of the new republic as defined by the treaty, and also includes for the first time on a map, the text of the delimiting Articles I, II and III, in the lower right-hand corner.

Significantly, Cary’s is the first general map of North America to show the route taken by Captain Jonathan Carver, between 1766–67, and to assimilate the results of his explorations. Carver’s discoveries would influence the new proposed northern boundary of the United States, from the intersection of the St. Lawrence River and the 45th parallel, through the Great Lakes to Lake of the Woods. Carver had met Benjamin Franklin in London in 1769. Franklin is known to have been sent an example of Carver’s self-published book, ​‘Travels through the Interior Parts of North-America in the Years 1766, 1767 and 1768’ (1778), which was illustrated by ​‘A Plan of Captain Carver’s Travels in the interior Parts of North America in 1766 and 1767’. Information in this map, particularly what would become known as the ​‘Nipissing Line’, was subsequently plotted in red ink on separate examples of John Mitchell’s map, 1755–1775, owned by the British commissioner Richard Oswald, and his American counterpart John Jay. Mitchell’s map served as the unofficial map for the Treaty negotiations, but its limitations included an inset obscuring the true location of the head of the Mississippi. Franklin knew from examining Carver’s original manuscript maps and journal that the head of the Mississippi actually lay south of the Lake of the Woods, and that if the northern boundary was extended due west from the Lake of the Woods with no existing terminal point, hypothetically it could extend forever. Franklin recognized the significance and potential for the new republic of this disparity, and the fact that it ultimately might give the United States a northern boundary that extended to the Pacific, rather than ending at the Mississippi. That, in the end, is exactly what happened, and Cary’s map shows the northern boundary line extending off the map, beyond the Lake of the Woods.

​“One of the treaty’s most dramatic results was the transference of land between the Allegheny Mountains and the Mississippi River from English sovereignty to the new nation. Specific boundaries were also established. The St. Croix River was designated the boundary between Maine and Nova Scotia but was in dispute for many years. A line of demarcation dividing the newly formed United States from Canada was defined by the St. Lawrence – Atlantic watershed, thought the Great Lakes, and along the 45th parallel. A line through the Mississippi River to the 31st parallel became the boundary between the United States and Spanish Louisiana, while the 31st parallel, the Apalachicola River, and the St. Mary’s River defined the boundaries between the United States and Spanish Florida. In consequence of the treaty, Spain claimed an area that was east of the Mississippi, South of the Tennesse River, and west of the Flint River in Georgia. France retained political sovereignty over only the islands of St.-Pierre, Miquelon, and Tobago” (Schwartz and Ehrenberg). Although the Treaty of Paris defined the southern boundary of the United States, Spain did not formally accept it until 1795.

John Cary sr. (1755–1835) was described by his biographer, George Fordham as ​“The most prominent and successful exponent of his time… the founder of what we may call the modern English school [of mapmaking]”. He was a hugely prolific engraver and mapmaker, thought to have made upwards of 600 individual maps and perhaps 1,000 separate plates.

He was apprenticed to the engraver and globemaker, William Palmer, in the Goldsmiths Company, on 7 March 1770 and made free in 1778; his early career was as a jobbing engraver, supplying maps and plates for a series of books and magazines from 1779.

His first major publication, which established a format he favoured over much of his career, was a pocket road book, ​‘Cary’s Actual Survey, of the Great Post Roads between London and Falmouth’, published in 1784. There followed ​‘Cary’s New and Correct English Atlas’ (1787), the first truly new county atlas for nearly forty years. The geographical material and engraving were high quality, but it was not designed for the more traditional ​“luxury” top end, rather the broader middle market, and the approach succeeded. The atlas was very successful, to the extent that the printing plates became worn out keeping up with demand.

Thus, it was that Cary captured the middle market, while rival firms, such as William Faden, were still focused on the top end. That is not to say Cary ceased to produce quality items: there were many such, for example large-scale county maps, notably Richard Davis’ ​‘A New Map of the County of Oxford, from an actual survey’ (1797) and George Yates’ ​‘A Map of the County Of Glamorgan; from an actual survey’ (1799), or Fréderic-François Guillaume de Vaudoncourt’s ​‘A New Map of Greece’.

As his success grew, he became more ambitious; ​‘Cary’s New Universal Atlas, containing distinct Maps of all the Principal States and Kingdoms throughout the World’ (1808, with later editions) and ​‘Cary’s New English Atlas’ (1809) were more substantial publications than normal.

In another way, Cary proved forward thinking, although he is rarely credited for the connection. An impoverished geologist approached Cary seeking backing to help get a map published. The man was William Smith; the map, ​‘A Delineation of the Strata of England and Wales, with Part of Scotland’ was to be the first geological map of England and Wales, printed on 15 sheets, a towering achievement both for its author and its publisher, John Cary.

When his shop was destroyed by fire, the elder John retired, in favour of his two sons; while they continued to produce a few maps, notably a fine map of ​‘London and its Vicinity’ (1820), John jr. was more an optical and mathematical instrument-maker, and George (II) a globe and instrument-maker.

Rare.Only one other example of this map has been offered publicly at auction, at the Streeter sale in 1969, lot 3779; five institutional examples are located at the British Library, John Carter Brown Library, Library of Congress, Yale Center for British Art, and the Yale University Map Collection.