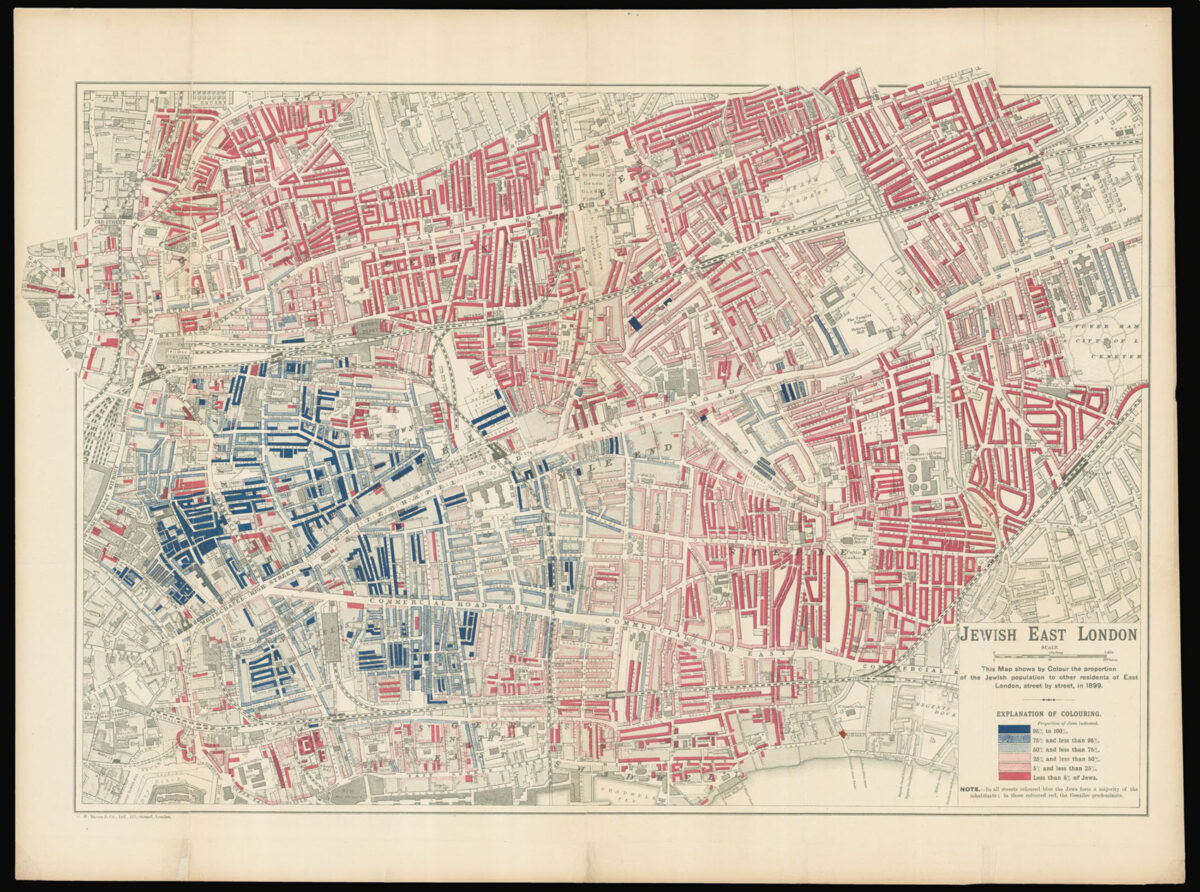 The map was the work of George Arkell, who was responsible for Booth’s seminal maps of London poverty, and like them, the information was taken from School Board visitors’ statistics. The map stretches north to south from the Hackney Road to the Tower of London, and west to east from Fenchurch Street Station to Tower Hamlets, City of London Cemetery.

The Tsarist persecution of the Jewish population in Russia and Poland in the latter half of the nineteenth century caused many to emigrate, and those that moved to London often sought refuge in the East End. It is estimated that some 7,000 Jews a year arrived from 1881 to 1900. Their arrival — like most emigrants or refugees — bred a great deal of resentment among the indigenous population. Although the work that accompanied the map attempts to give an balanced account of the Jewish present in the East End, to the casual observer it might give the impression of an East End dominated by the new arrivals. It is a sea of red and blue: red denotes a concentration of less than 5% of Jews; and dark blue denotes an area between 95–100% Jewish. Arkell used the same colour scheme as the Booth poverty maps, where dark blue was used to denote areas verging on ​“vicious, semi-criminal poverty”.

Arkell’s map may, therefore, have inadvertently ​“fuelled the racism that let to the passing of the 1905 Aliens Act aimed at reducing Jewish immigration to a trickle. In fact, at the time the overall Jewish presence in Stepney was only 18% and it never seems to have exceeded that percentage” (Barber).

The map was produced for inclusion in ​‘The Jew in London’, a study of the Jewish population in the city by Charles Russell and Harry S. Lewis, commissioned by Toynbee Hall, an East End settlement house.

George Edward Arkell (1857–1926) was born in Pimlico, the son of a London cab driver. There can be few better basic qualifications for mapping London. He worked originally in publishing, but by this period was employed as a private secretary. He conducted numerous interviews for Booth – speaking to tailors, hatters, boot-makers, wood-workers and others – and toured the poorer streets (escorted by policemen) to make notes.