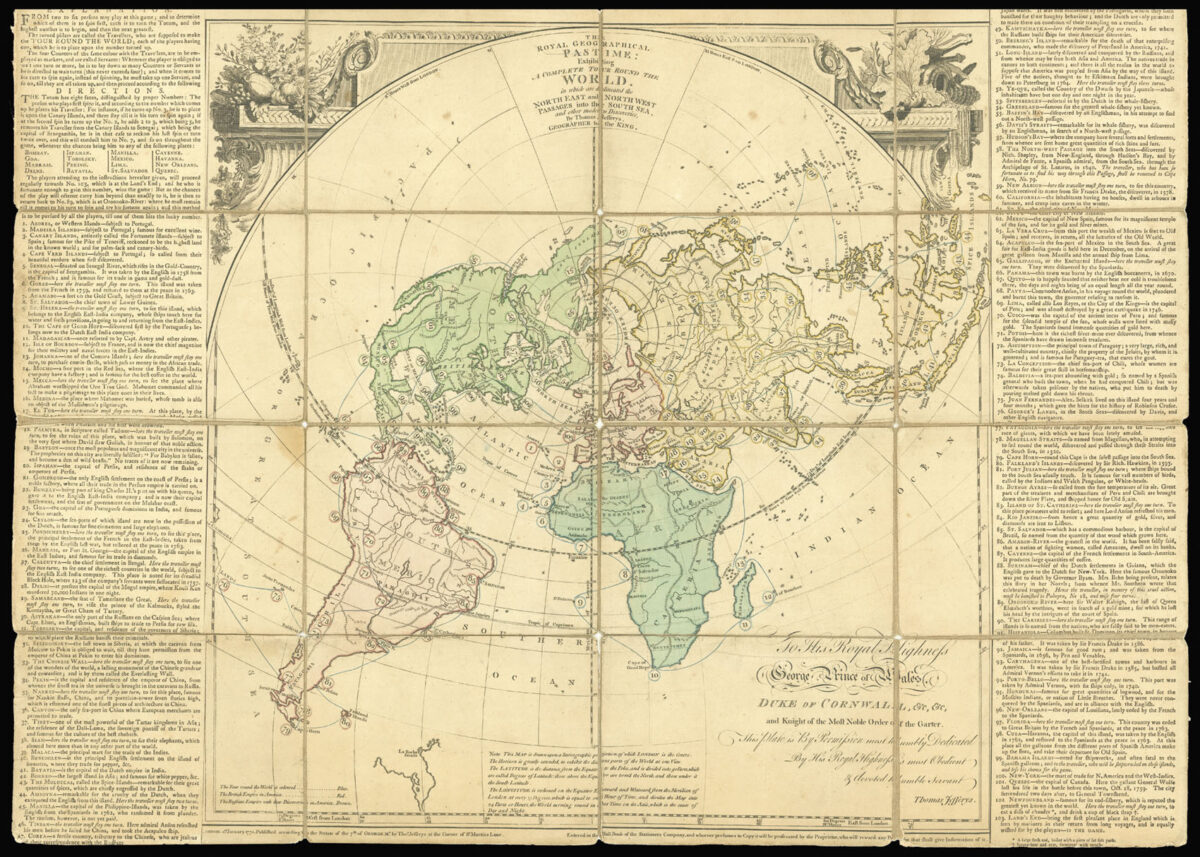 Jefferys’ geographical game of the world

The Royal Geographical Pastime, Exhibiting a Complete Tour Round the World in which are delineated the North and North West Passages into the South Sea, and other modern Discoveries, By Thomas Jefferys, Geographer to the King. To His Royal Highness George Prince of Wales, Duke of Cornwall, &c., &c., and Knight of the Most Noble Order of the Garter. This Plate is By Permission most Humbly Dedicated By His Royal Highness’s most Obedient & devoted Humble Servant Thomas Jefferys.

Rare cartographic game of the world.

The game begins in the Azores, and heads down the west coast of Africa, passing St Helena, and the Cape of Good Hope ​“discovered first by the Portuguese”, from there the player heads up the east coast and into the Red Sea to the port of Mocho (Mukha) which ​“is famous for the best coffee in the world”, and Mecca where ​“Mahomet commanded all is sect to make a pilgrimage to this place once in their lives”. The player leaves the Arabian Peninsula, journeying through Iran and into India, where one must stay two turns in Calcutta the capital Bengal, ​“to see one of the richest countries in the world”. From there they had north through Central Asia and on to China, and Pekin ​“capital and residence of the Emperor of China, from whence the finest tea in the universe is brought in the caravans to Russia”. From hence to Tibet, which is not only the residence of the ​“Dali-Lama” (sic), but also the has the ​“best rhubarb”. The player then turns their attention to the Southeast Asia, passing Borneo, the Spice Islands, Japan, and the Baring Straits. The player arrives in the New World through the North West Passage, which according to Jefferys’ was discovered by ​“Nich. Shapley, from New-England, through Hudson’s Bay, and by Admiral de Fonte, a Spanish admiral, from the South Sea … in 1640”. Down the south coast to California where ​“the inhabitants have no houses, dwell in arbours in the summer, and creep into caves in the winter”, to Central and South America and up the east coast to New York, and Newfoundland, were the traveller must stay a turn to sample the ​“chauder” a dish of cod boiled with fat salt pork, and a cup of ​“black strap” spruce beer and rum sweetened with treacle. The game ends with the sight of Lands End ​“the first pleasant place in England which is seen by mariners in their return from long voyages”.

The present example is the second state with the engraved dedication to the Prince of Wales added to the lower right.

Rare we are only able to trace two institutional examples: a first state housed at the British Library; and an example of the second state at Colonial Williamsburg.