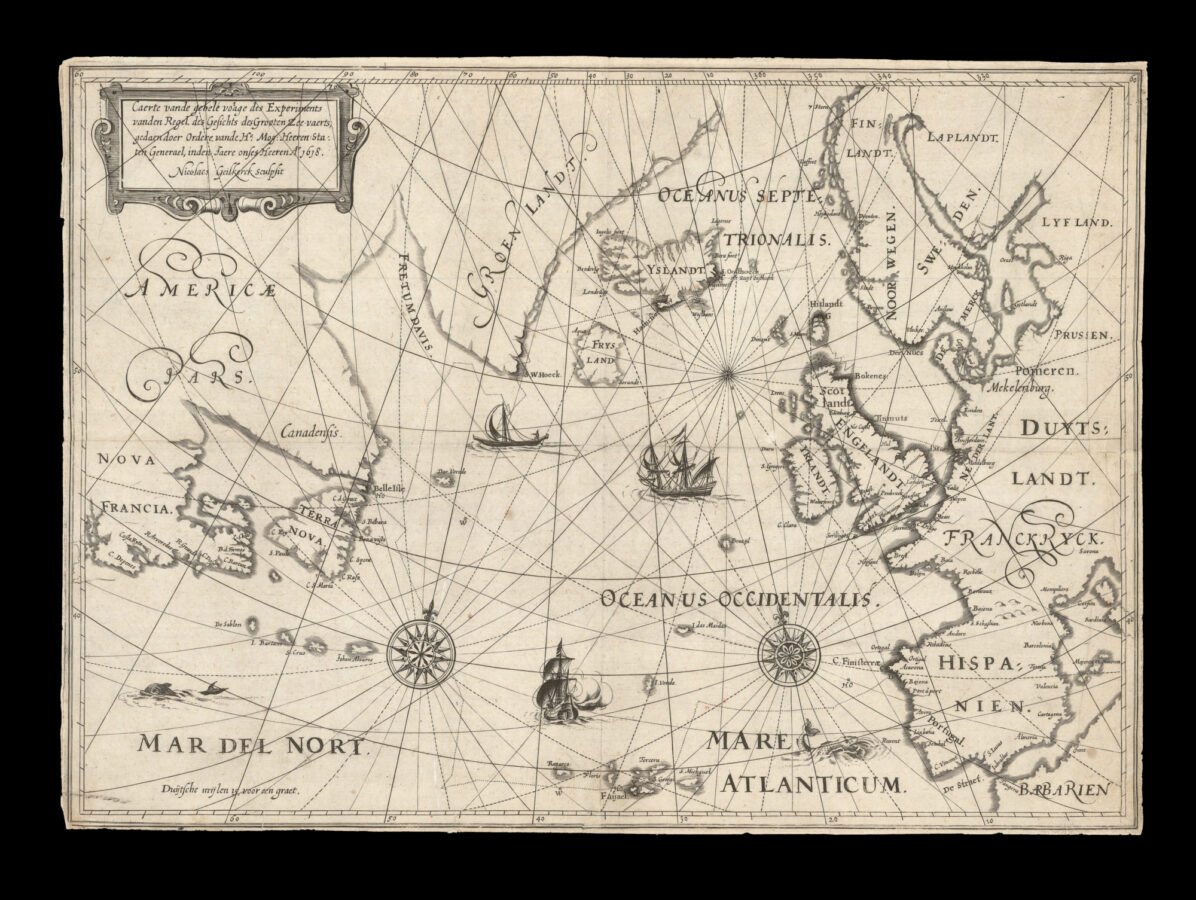 Jarichs’ Solution to the Longitude Problem

Exceptionally rare map of the North Atlantic tracking an experimental voyage conducted to test a new theory of longitude and latitude.

Almost nothing is known about the early life of Dutch cartographer Nicolaas Geelkercken, with Scherpenzeel, Zutphen and Geilenkirchen each variously posited as a potential birthplace. He first appears in the records in 1600, when he produced a picture of the Castle of Verwolde, leading to a suggested year of birth of around 1585; this was then followed by a ten-year gap before he reappears in Leiden as a draughtsman, engraver, publisher and surveyor. Throughout his career, Geelkercken engraved at least 169 maps and plans, as well as several views and portraits, and operated in Leiden, Amsterdam and Arnhem, where his business was eventually inherited by his son Isaak in 1656. Among Geelkercken’s most important works were two world-maps produced at the outset of his career, a huge map of Pomerania measuring 1250 by 2170mm, and a map of Palestine decorated with ten detailed depictions of Biblical scenes.

Until recently the present chart, engraved by Geelkercken in 1618, was unrecorded, and its origins remain something of a mystery. Focused on the North Atlantic and the surrounding lands, it illustrates a voyage undertaken in to test a new method for identifying longitude, suggested by Jan Hendricksz Jarichs van der Ley in 1615.

The growth of European empires during the sixteenth and seventeenth centuries meant that new importance was placed on the sailing power and prowess that facilitated overseas trade and travel. There was therefore a rush to find an accurate and reliable method of calculating longitude while at sea, with the British Parliament offering rewards of up to £20,000 for successful innovations. The States General and the States of Holland also sponsored a prize for a solution to this ongoing problem, which had resulted in the loss of several Dutch ships in treacherous foreign waters. Alongside applicants such as Galileo Galilei and Christiaan Huygens was Jan Hendrick Jarichs van der Ley, a mathematician and Receiver General, or tax collector.

In 1615, Jarichs presented his idea in ​‘Het gulden zeeghel’. It involved using trigonometric calculations, which were only just beginning to be be applied in navigation, to check the estimated latitude by simple astronomical observations. Although compounded errors could still result in significant inaccuracies, Jarichs’ solution reached the trial stage of the research after he presented the States General with his innovative charts showing parallels, meridians and rhumb lines on his own version of a stereographic projection. The present chart displays just such a network of curved lines. Although his method was criticised by some of the government’s experts, including Blaeu, it nonetheless secured a trial run.

The Bruyn-Visch set sail from Holand under Captain Joris Carolus, a Dutch cartographer and pilot; after voyaging to Iceland via Scotland, it skirted the northeast coast of Greenland before returning from Newfoundland via the Azores, making home port five months after its departure. The complete journey is recorded on the present chart. During the voyage, they had been able to plot coordinates for several landfalls more accurately than previously charted, but there remained substantial errors.

Nevertheless, Jarichs persisted with his method, preparing a small booklet entitled ​‘Gesicht des grooten zeevaerts’ for the States General in 1619 detailing the successes of the trial. The following year a small panel official endorsed Jarichs’ method, and consequently the States General allowed Jarichs a twelve-year privilege for an account of the voyage. ​‘Voyage van[‘]t experiment vanden generalen regul des Gesichts vande groote zeevaert’ was published the same year. Jarichs thus became the only applicant who ever received reward from the Dutch government on account of his work on the longitude problem, even though his method never came into general use.

Engraved in 1618 after the completion of the voyage, Geelkercken’s chart shows parts of New France in the west, including Canadensis and Terra Nova, with its coastline are drawn in grey rather than black to indicate that they were as yet unchartered territories. Greenland is outlined, as is the Davis Strait, Iceland and the mythical island of Friesland, as well as the British Isles and Continental Europe as far south as Spain. The very north-western swathes of Africa, labelled ​“Barbarien”, are shown in the lower right-hand corner. The waters are adorned with illustrative ships and sea-creatures, along with two ornate compass roses.

The title of the chart, which explains that it was ​“executed by Order of the High and Mighty Gentlemen of the States General”, indicates that it is likely to have been ordered as part of an official report on Jarichs’ trial. Other sources have suggested, however, that the chart was included in his books, although no extant copies of either the ​‘Gesicht’ or ​‘Voyage’ contain it. Likewise, although some have suggested ​‘s‑Gravenhage as the place of publication, it is more likely that this map was published in Leeuwarden by Dierick Alberts, as was the case for several other works by Geelkercken at the time.

Overall, this extremely rare chart offers unique insight into one of the suggested solutions to the longitude problem that would continue to befuddle European navigators for over one hundred years.

The only other recorded example of the chart, is according to Burden housed in a private American collection.