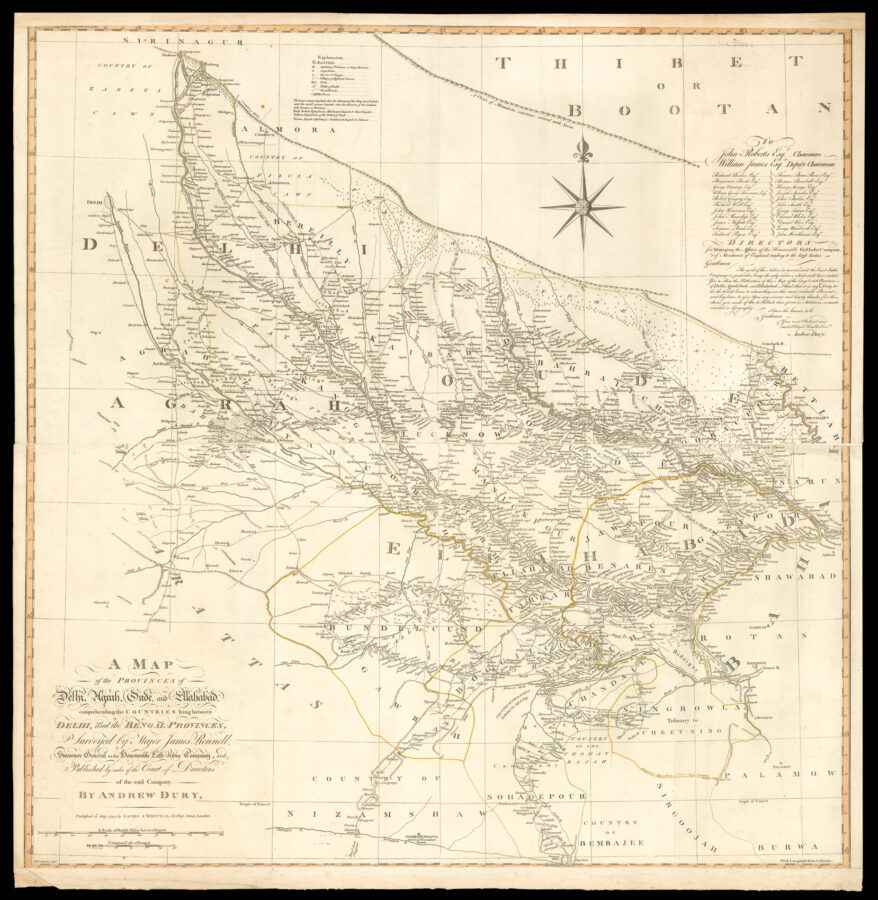 A Map of the Provinces of Delhi, Agrah, Oude and Ellahabad comprehending the Countries lying between Delhi, and the Bengal-Provinces, Surveyed by Major James Rennell, Surveyor General to the Honourable East-India Company, and Published by order of the Court of Directors of the said Company, By Andrew Drury.

James Rennell (1742–1830), now known as the ​“Father of Indian Geography”, laboured in Bengal and elsewhere for a period of 13 years, during which he surveyed an area of about 300,000 square miles, stretching from the eastern boundaries of Lower Bengal to Agra, and from the Himalayas to the borders of Bundelkhand and Chota Nagpur. Rennell was originally just one surveyor among many, but he showed such enthusiasm and ability that Major-General Robert Clive, 1st Baron Clive, the governor of Bengal and Bihar, promoted him to Surveyor-General in 1767. Rennell was only 24 at the time. The mapping project was originally a general survey of newly acquired lands, but the job soon gained a wider scope under Warren Hastings, who was appointed as Governor-General in 1773. One of Hastings’ first projects was to begin a Domesday style reckoning of property, land, people, and culture for taxation of revenue. As for Rennell’s part in this, his project was carried out much like a military survey, searching for safe passage through territory, with information gathering a secondary object.

The map was published in Robert Laurie’s and James Whittle’s ​‘A New Universal Atlas’, of 1794.

From the first Western atlas of China