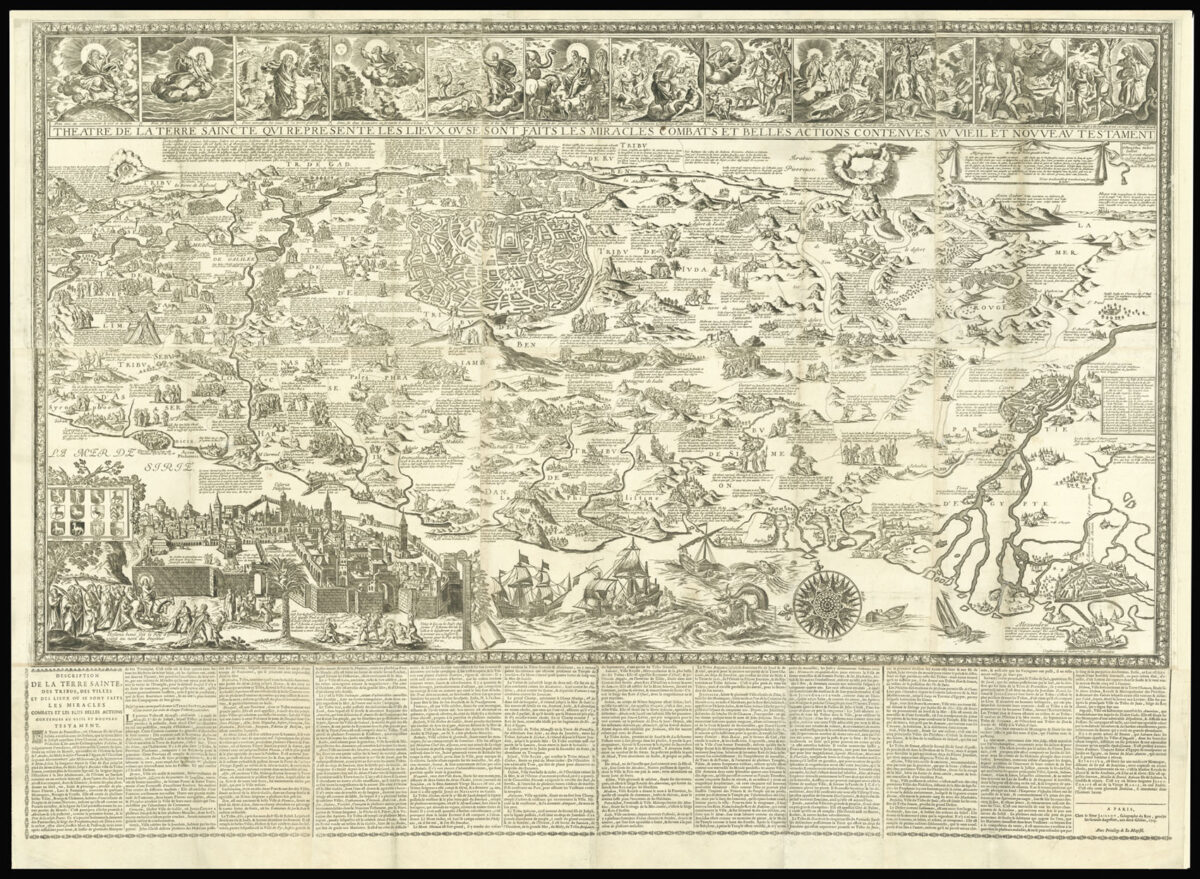 The map — orientated with east at the top — stretches from Sidon and Damascus in the north to Alexandria and Mecca in the south. As the title suggests numerous scenes from the Old and New Testament are depicted: from the Saul’s conversion on the road to Damascus; Moses receiving the Ten Commandments on Mount Sinai; to the birth of Jesus Christ. To the lower left is a birdseye view of Jerusalem — after Visscher — with scenes of Christ’s entrance into Jerusalem on Palm Sunday, the stoning of Stephen, and Christ driving the money lenders out of the temple. To the right upon the sea Jonah is being thrown from a vessel,with an expectant whale’s mouth wide open. To the upper centre of the map is depicted ancient Jerusalem, with a key to the far right identifying 35 places of interest, including Herod’s Palace, the Temple of Solomon, and the David’s monument. To the extreme upper right beyond the Red Sea is ​“Meque” (Mecca); the legend to the right tells us that the town is the most magnificent town in Arabia where the Turks (Muslims) go on pilgrimage as they believe it to be the birth and burial place of Mohammed, were 3000 candles are constantly a light. Just above Mecca is dedicatory inscription by Jaillot and his imprint dated 1697.

Above the map are 12 images showing the creation of the world, the creation of man, and his expulsion from Eden. Below the map is a large text block providing information upon the map. The text block is dated 1723, and was evidently added to the map by his son. The map itself bears similarities with Carel Allard’s map of the Holy Land ​“Nieuwe Caarte van’t Belvoode Land…”, published around 1700 in Amsterdam.

Alexis Hubert Jaillot (1632–1712) followed Nicholas Sanson (1600 — 1667) and his descendants in ushering in the great age of French Cartography in the late 17th and 18th century. The publishing center of the cartographic world gradually transitioned from Amsterdam to Paris following the disastrous inferno that destroyed the preeminent Blaeu firm in 1672. Hubert Jaillot was born in Franche-Comte and trained as a sculptor. When he married the daughter of the enlumineur de ala Reine, Nicholas Berey, he found himself positioned to inherit a lucrative map and print publishing firm. When Nicholas Sanson, the premier French cartographer of the day, died Jaillot negotiated with his heirs to republish much of Sanson’s work. Though not a cartographer himself, Jaillot’s access to the Sanson plates enabled him to publish numerous maps and atlases with only slight modifications and updates to the originals. As a sculptor and an artist, Jaillot’s maps were particularly admired for their elaborate and meaningful allegorical title cartouches and other decorative elements. Jaillot used his allegorical cartouche work to extol the virtues of the Sun King Louis IV, and his military and political triumphs. These earned him the patronage of the French crown who used his maps in the tutoring of the young Dauphin. In 1686 he was awarded the title of Geographe du Roi< and with it significant prestige and the coveted yearly stipend of 600 Livres. Jaillot was one of the last French map makers to acquire this title. Louis XV, after taking the throne, replaced the position with the more prestigious and singular title of Premier Geographe du Roi. Jaillot died in Paris in 1712. He was succeeded by his son Bernard Jean Hyacinthe Jaillot (1673–1739)

Rare OCLC records two institutional examples: in the National Library of Israel dated 1697; and the University Library at Dresden dated 1706; there is also an example in the Tresor de Liege.