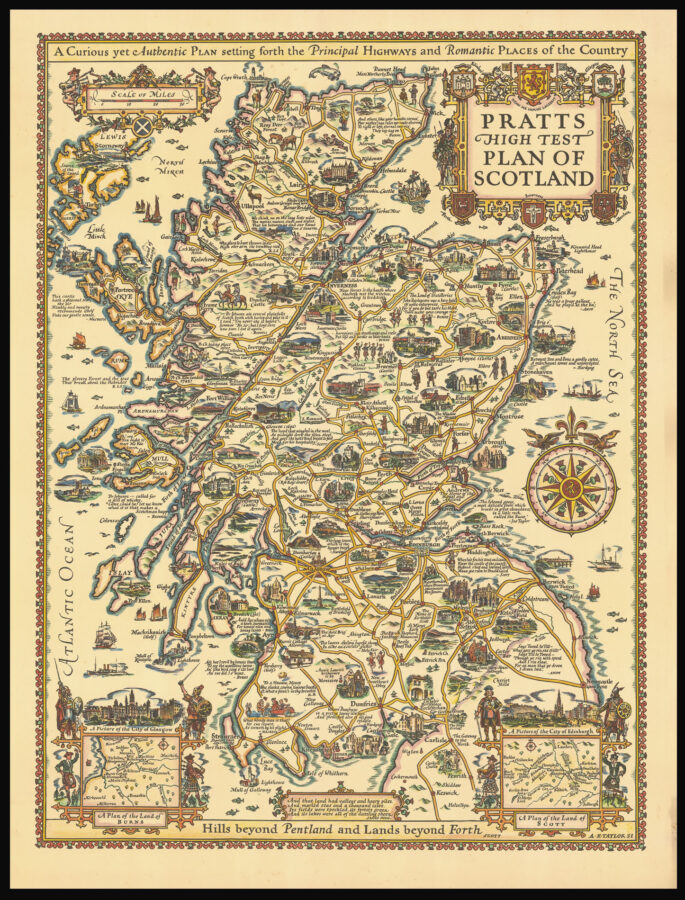 “Its fields were speckled, its forests green, and its lakes were all of a dazzling sheen”

Pratts High Test Plan of Scotland A Curious yet Authentic Plan setting forth the Principal Highways and Romantic Places of the Country.

A pictorial road map of Scotland with vignettes showing Glasgow and Edinburgh, and inset maps of the land of Burns and the land of Scott.

Charles Pratt was an oil company director, and the richest man in Brooklyn in the 1880s. His ​‘High Test’ motor fuel was popular in the inter-war period and it was promoted on a range of merchandise, including maps. The Pratt’s name was used throughout the 1920s and 1930s, eventually being replaced in 1935 by ​“Esso”.

The map was published by the Anglo-American Oil Company (which became British Petroleum in 1954), and shows Scotland turned into a paradise for leisure and recreation. Cities, towns, villages, places of interest and local people are depicted in vignettes throughout the map, and there are many historical and interesting annotations as well. All places are connected by an intricate network of roads.

​“And that land has valleys and hoary piles,
And marlèd seas and a thousand isles.
Its fields were speckled, its forests green,
And its lakes were all of the dazzling sheen.”