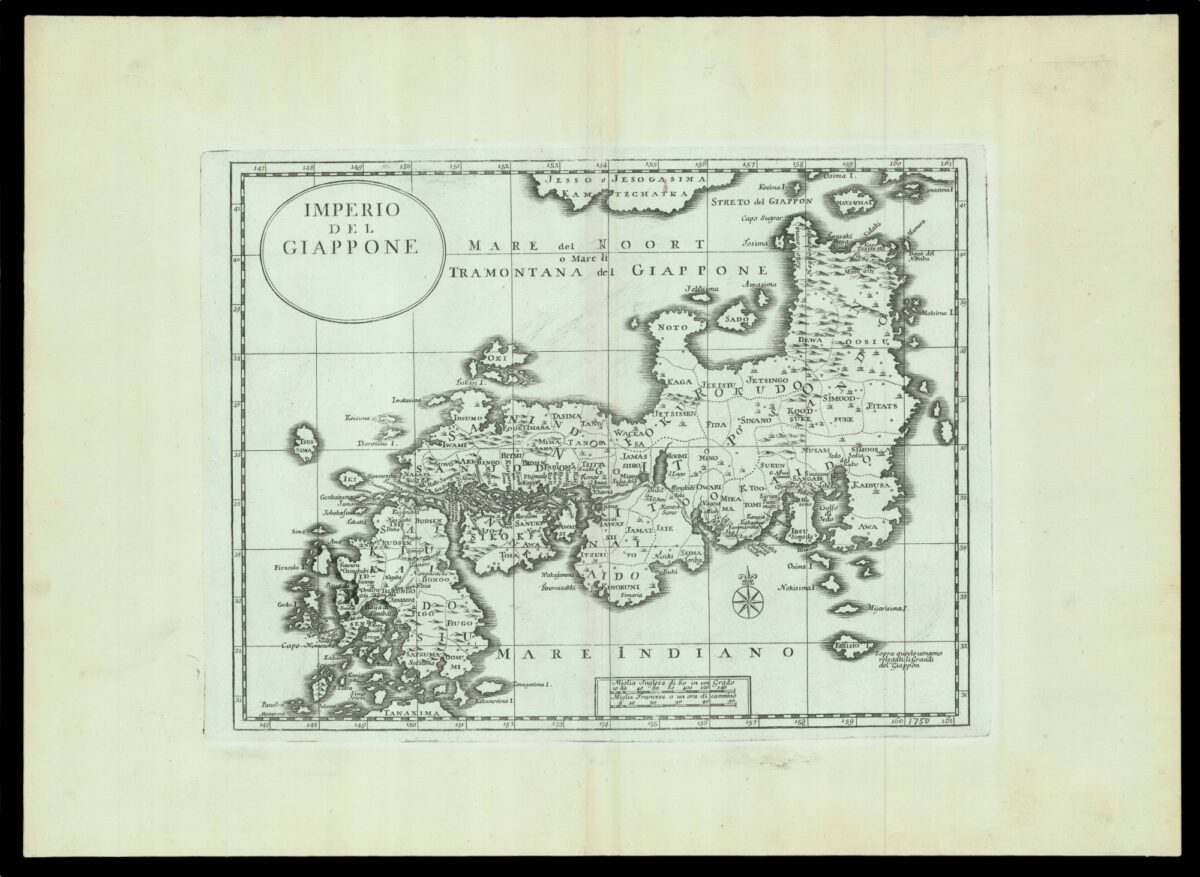 The third state of the map, with the title changed to ​‘Imperio del Giappone’ and published in Albrizzi’s ​‘Atlante Novissimo’.

Albrizzi (1698–1777) began to publish Salmon’s ​‘Modern History…or, the present State of all Nations’, ​‘Lo Stato Presente Di Tutti Paesi E Popoli Del Mondo’ in 1731, when he issued volume one. The second volume ​“containing the map of Japan was published only in 1734. By 1738, the popularity of the work forced him into publishing a second edition, probably having exhausted the initial volumes. He continued to add volumes up to a least 1762, by which time he had issued a volume 26” (Hubbard). The map of Japan was a copy of Tirion’s version of Kaempfer’s map, probably engraved by Giuseppe Filosi (fl1732-1757), with only the title and the names of the seas and major features changed into Italian.

The map retains Tirion’s mistakes and has inadvertently joined ​‘Jesso of Jesogasima’ – Hokkaido – with ​‘Kamtzchata’ and placed it further west than in Kaempfer’s depiction. Tirion has added the route the Dutch took for their journey between Nagasaki and Edo with a broken line along the sea route and a double line along the land route.

In 1740, Albrizzi had Filosi’s copperplate altered for inclusion in the Italian-language version of the atlas of Guillaume De L’Isle, ​‘Atlante Novissimo’, with the title changed to ​‘Imperio del Giappone’, with no mention of Tirion’s authorship, the town symbols for ​‘Jedo’, ​‘Miaco’, ​‘Osacca’, ​‘Saccai Satzuma’ and ​‘Nangasacki’ were enlarged, and ​‘Nangasacki’ appears erroneously on the east coast of Kyushu.

Kaempfer (1651–1716), originally from Lemgo in Germany, was appointed a member of a Dutch trade mission bound for Japan in 1690. His resulting ​‘History of Japan…’ is an encyclopedic, and profusely illustrated, description of the Japanese flora and fauna, government and industries, and it remained the chief source of Western knowledge of Japan for over a century. Sir Hans Sloane acquired Kaempfer’s botanical specimens after the author’s death, and had an English translation prepared by his librarian Scheuchzer, from the original manuscript.

Isaak Tirion (c1705-1765) was granted the privilege in September of 1728 to publish Salmon’s work in Dutch, a little over a year after his name appears for the first time in the records of the bookseller’s guild. Although he was primarily known as a bookseller, he also made a name for himself in the world of cartography, publishing a number of atlases despite the fact that he was neither a cartographer nor a geographer. His wife continued the business for about 10 years after his death.

Guillaume De L’isle (1675–1726) was a French cartographer. He studied under Jean-Dominique Cassini, and was admitted into the Académie Royale des Sciences in 1702. In 1718, he gained full membership of the Académie and was appointed geography tutor to the Dauphin, as well as being appointed chief royal geographer. De L’isle had access to news of the latest discoveries through his membership of the Academy.