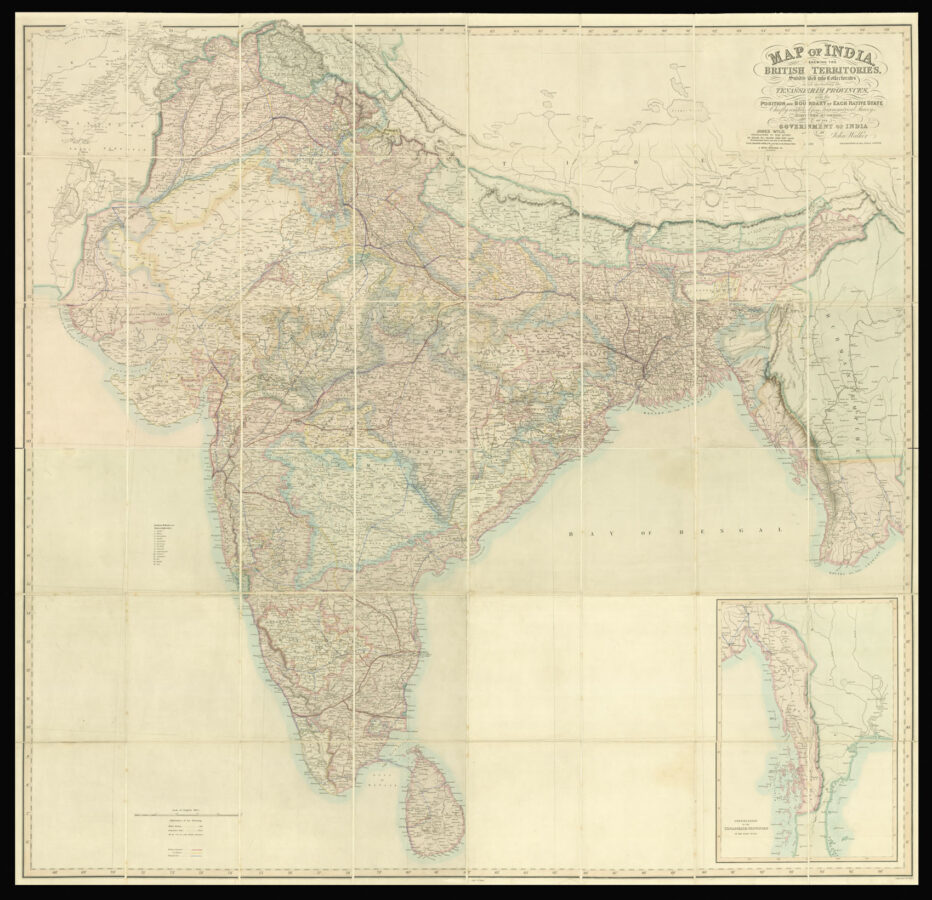 India and Burma during the British Raj

Map of India, Shewing the British Territories Subdivided into Collectorates and including the Tenasserim Provinces with the Position and Boundary of Each Native State Chiefly compiled from Trigonometrical Surveys, Executed by Order of the Government of India By John Walker Geographer to the India Office.

Superbly detailed wall map of India during the early days of the British Raj.

The map stretches from Afghanistan in the west to Burma in the east and from the Punjab in the north to Sri Lanka in the south. British colonies are coloured red, with independent states green, all other territory is under British protection. Complete railways are marked in red, with those under construction yellow; telegraph lines are marked in blue. At the time of the publication of the map the British Government had taken over control of the Indian territories from the East India Company, following the Indian Mutiny of 1857. The map shows the vast scale of the British Raj, its network of client states, together with extensive network of railways and telegraph lines.

The map was drawn and engraved by John Walker (fl.1813–1873) mapmaker, engraver, lithographer, draughtsman, publisher, and cartographer to the East India Company and subsequently the India Office.

Wooden ship ​‘Holmsdale’, 1250 tons, at Port Augusta [wooden ship 1257 gross tons. ON 31590. 206.8 x 37.7 x 22.4. Built 1858, J Reed, Sunderland. Owners Phillips and Co. registered London. c.1872 Bilbe and Co. who placed the ship under the management of Anderson, Anderson and Co., and she operated as a unit in the Orient Line. The ship ultimately passed to the ownership of Anderson, Anderson and Co. Sold to Norwegian owners she went missing in 1897. Originally employed in the India and China trades, upon sale to Bilbe and operating as an Orient liner she commenced in the Australian trade, her usual voyages being outward to South Australia and homeward from Melbourne. There is an abstract of her homeward log in 1883 in ​‘Blackwall Frigates’. In ​‘Colonial Clippers’ there is a mention of her appearance in the Australian Wool Trade in various years, without much detail and ​‘Blackwall Frigates’ gives some additional, sketchy information.]