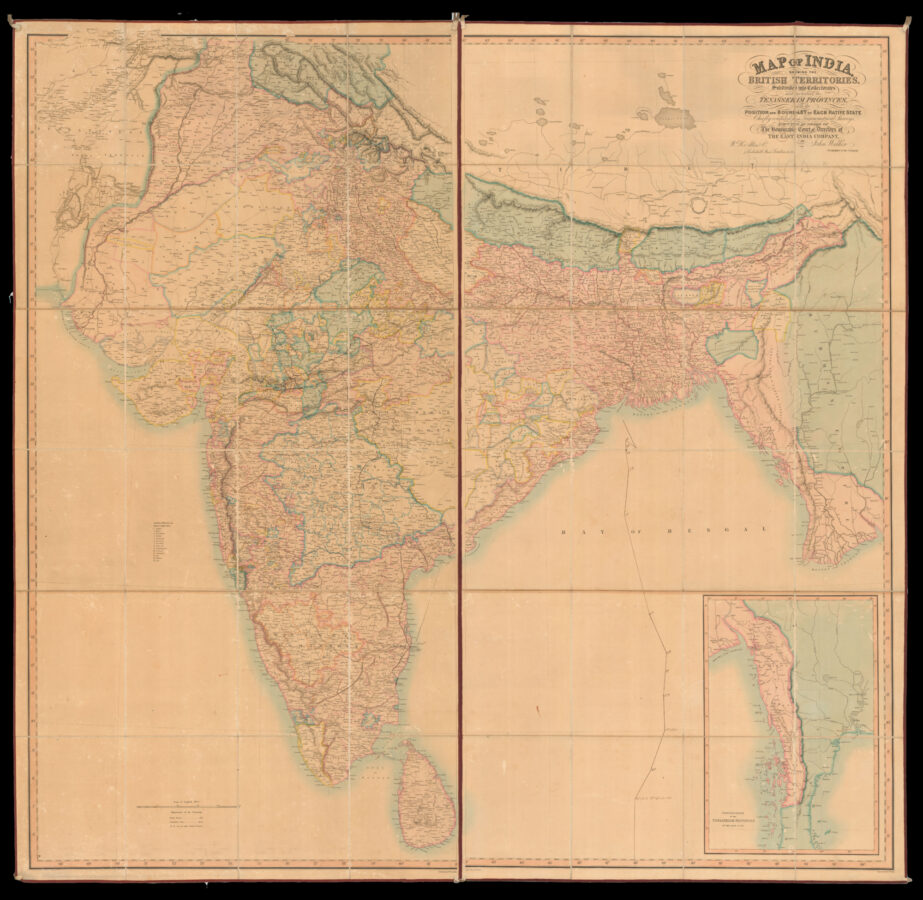 In pursuit of Tantia Tope

Map of India shewing the British Territories, Subdivided into Collectorates and including British Burmah with the Position and Boundary of Each Native State Chiefly compiled from Trigonometrical Surveys, executed by Order of the Government of India By John Walker, Geographer to the India Office.

Superbly detailed wall map of India, with extensive manuscript annotations showing British troop movements during the Indian Mutiny or First Indian War of Independence, of 1857–1859.
Although the manuscript tracks criss-cross large parts of the Indian subcontinent, and stretch from Madras and Coimbatore in the south to Udaipur in the north, and Mumbai in the west to Machilipatnam in the east; the majority of the marked routes are centred around the modern day provinces of Madhya Pradesh and Rajasthan, and especially around the cities of Indore, Bhopal, Sagar, and Udaipur. Several of the locations are marked with a date, for example: Madras 11 May ​’59; Machilipatnam 12th May ​’59; and Hyderabad 20th May. To the Bay of Bengal the track of the Blackwall frigate Holmsdale is plotted — arriving at the mouth of the Hoogley river on 11th October 1858.
Although none of the tracks marked in Rajasthan and Madhya Pradesh are dated it is safe to assume that they mark routes undertaken by British and East India Company troops during the First Indian War of Independence. It can also be stated with some degree of confidence that these tracks mark the 1858/59 campaign to track down and capture Tantia Tope.
Tantia Tope (1814–1859) was a leading general of the Indian revolt, and proved such a significant menace to the British, that his capture was one of the highest priorities during 1858 and 1859. During mid-1858 Tanita is known to have continued a guerilla war around the cities of Indore, Bhopal, and Sagar. The map shows a spider’s web of routes around Indore, where Tantia was being harried by at least six separate British forces. The route up to Udiapur is also marked; Tantia’s attempt to reach the city was thwarted by the British in late 1858.
Although it is difficult to mark with any degree of certainty which British forces are shown on the map, the routes seem to correspond most closely with the forces led by General John Michel, who confronted Tantia south of Indore, and Major Rocke, who engaged Tantia east of Udaipur.
Tantia would continue his guerilla warfare until March of 1859, by which point he had lost most of his men. Tantia exhausted and demoralised sought sanctuary in the court of Man Singh, Raja of Narwar. Alas the Raja betrayed him to the British, and Tantia was hanged on the 18th April 1859, in Shivpuri.
The map shows the vast scale of the British possessions, its network of client states, and early railway construction can be seen emanating from Mumbai and Kolkata. British colonies are coloured red, independent states green, French possessions blue, Portuguese green, and frontier states light green.
The map was drawn and engraved by John Walker (fl 1813–1873) mapmaker, engraver, lithographer, draughtsman, publisher, and cartographer to the East India Company and subsequently the India Office. 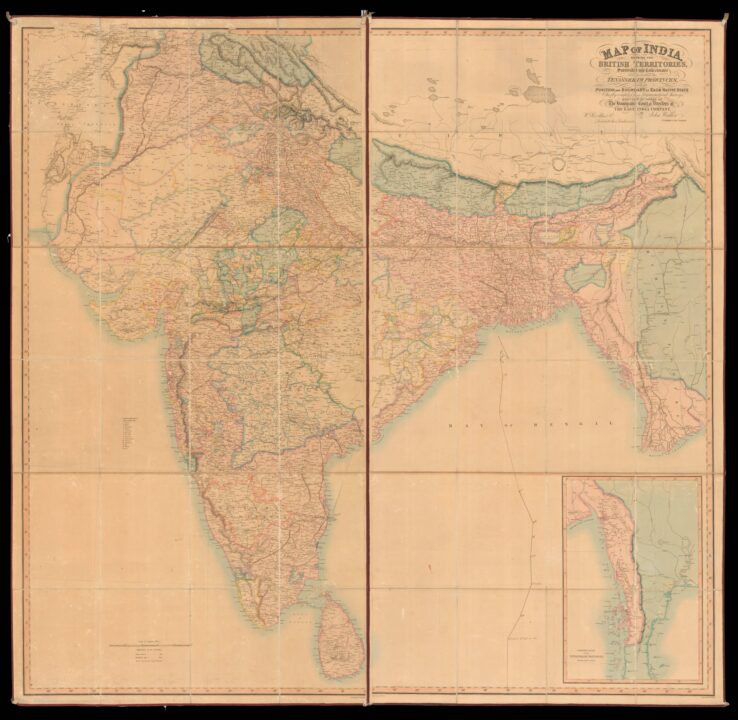