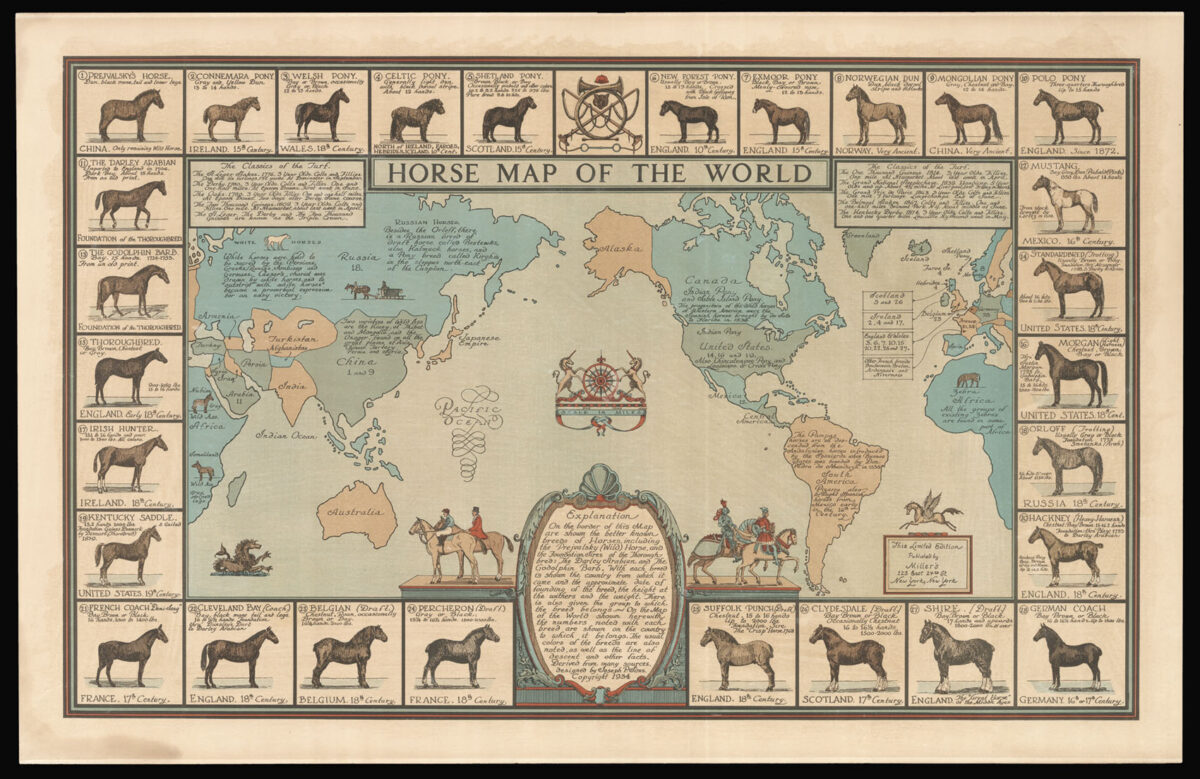 Horse Map of the World

Horse Map of the World.

With their origins traced to the Renaissance, thematic maps offer more than a straightforward geographic survey. One of the earliest models, for example, shows the dispersion of major religions across the globe (Hondius’ Designatio orbis Christaini , 1607) and later examples illustrate the spread of diseases (Snow’s cholera map, 1854). This map, by contrast, takes a far more light-hearted subject matter in documenting the origins and locations of various breeds of horses. Designed by architect and keen cartographer, Joseph Patterson Sims, it represents the distribution of equine breeds throughout the world. The border surrounding the main map is divided into 28 boxes, each containing a colour illustration of a certain breed, accompanied by its name, place (and sometimes century) of origin, size, colour and, often, weight. Each one is assigned a number correlating to the central map, thus demonstrating the distribution of these major breeds across the globe. As if not self-explanatory, Sims includes an extensive explanation contained within an elaborate cartouche in the lower central portion of the map. In this text, he singles out the Prejvalsky, perhaps as the ​‘only remaining wild horse’, and the ancestors of the modern thorough-bred, because of their significance in racing. In fact, the map appears to be formed with fans of the equestrian sport in mind, with two boxes in the upper corners listing ​‘The Classics of the Turf’, that is, the most important annual horse races. The highly decorative nature of the cartouche is complemented by the plinths on either side, both of which are surmounted by riders in various outfits, and are undoubtedly designed to express a short history of European horsemanship, with contemporary jockey and equestrian
on the left, and medieval figures on the right.

On the map itself, other breeds including the Beetewk, the Nubian Gray Wild Ass of Africa and, interestingly, the Zebra, are illustrated, along with annotations providing addition information. One such notes discusses the superstitions surrounding white horses which, although historically spurious, undoubtedly contributes to the light-hearted style of the work. Others suggest other breeds that might also be found in the given country, although , surprisingly, none are attributed to India, where there is literary and visual evidence of equine activity for several millennia, Turkistan (modern Kazakhstan), which is known to have been responsible for at least four breeds, or the Iberian Peninsula. The latter is perhaps the most striking omission, given that an annotation above South America explains that horses were brought there by the Spanish in the sixteenth century. Indeed, although the equus genus did originate in North America, horses had died out there during prehistoric times, and were only reintroduced by Europeans upon the discovery of the New World. Likewise, the much simplified map of Asia documents the origins of only Chinese, Russian and Arabic horses, despite the prevalence of horses throughout the continent. Sims does, however, add details of other breeds found in Mongolia, a country with an important equine history and culture, since horses were an essential part of the nomadic existence which many Mongols lived.

More ornamental features are to be found on the map, such as the scale and compass in the centre, which are flanked by two unicorns, in keeping with the equine theme. Similarly, a hippocampus is illustrated in the lower left corner, while another aspirational horse is shown on the opposite side, flying over a small cartouche containing information about the map’s publication. Alongside this thematic map, Sims wasresponsible for a Dog Map of the World , published the previous year. Neither work is designed as a scientific or exhaustive survey of breeds, but a decorative, informative and interesting piece for animal enthusiasts.