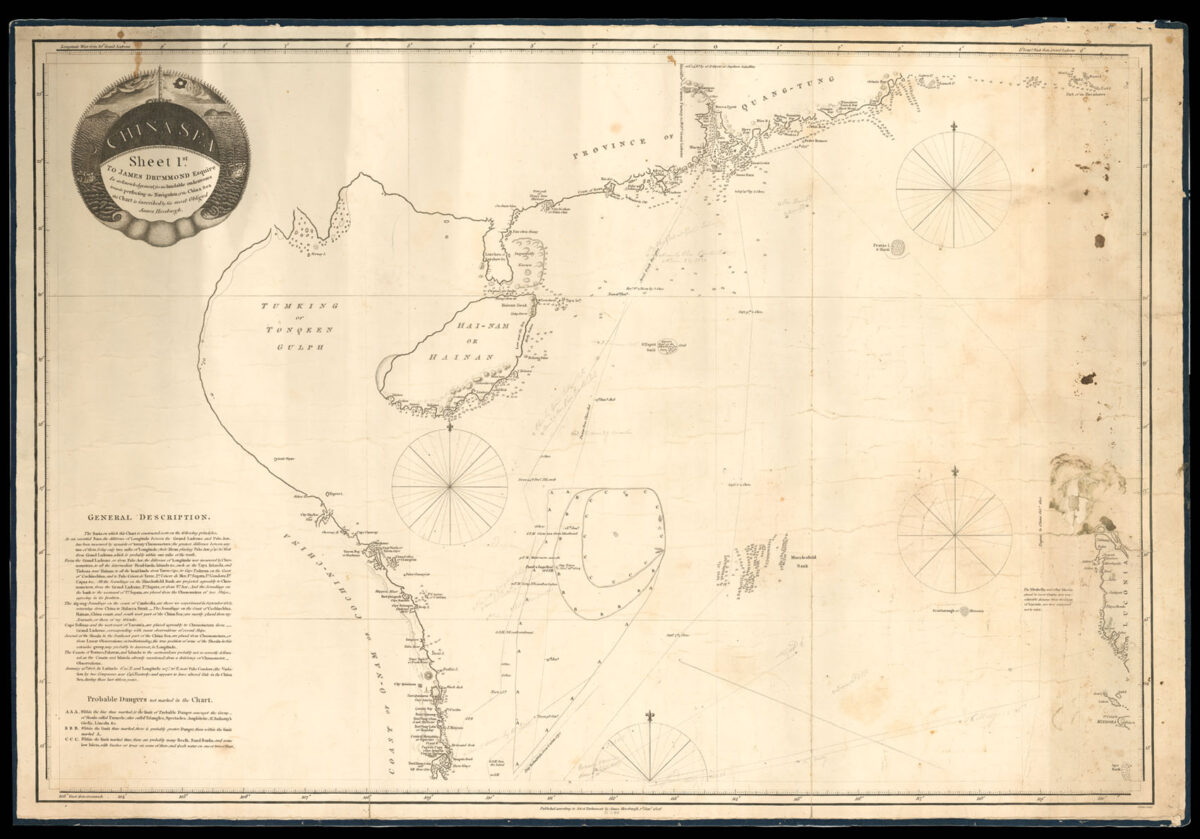 China Sea. Sheet 1st. To James Drummond Esquire In acknowledgement for his laudable endeavours towards perfecting the Navigation of the China Sea this Chart is inscribed by his most Obliged James Horsburgh.

Rare and detailed chart of the South China Sea.

Below the title is a ​“General Description” which gives an outline on how the chart was constructed, with the extensive use of chronometers to calculate longitude; the text also mentions were the chart might be deficient: notably in ​“Several of the Shaols in the Southeast part of the China Sea, are placed from chronometer or from lunar observations… the true position of some of the shaols in this extensive group may probably be incorrect, in Longitude.” Below is a key to the ​“Probable Dangers not marked in the Chart”. The key denotes three areas on the chart marked AAA, BBB, and CCC, which cover to a greater extent the Paracel Islands. The area AAA is marked with ​“probable Dangers”; BBB ​“greater Dangers”; and CCC ​“probably many Reefs, Sandbanks”. The Paracel Islands would not be fully surveyed until 1807 when Captain Daniel Ross was sent by the East India Comapny to the South China Sea. This knowledge is reflected in the second issue of the chart, which dispenses with the key denoting probable dangers and sets out the numerous islands and shoals.

The present chart is one of the first to bear his imprint. Having returned from the Far East to London in 1806, he was encouraged by several noblemen, to publish his work independently. James Drummond, head of the East India Company’s factory in Canton, and to whom the present chart is dedicated, was one such gentleman. The chart is based upon Horsburgh’s copious notes and surveys, which he had gathered over the previous 20 years. Many of his findings had been published in his ​‘Memoirs: comprising the navigation to and from China…’ of the previous year. In both the chart and the memoir he clearly sets out his views on the vagaries of both surveys as, ​“only approximations towards perfection”, and the calculation of latitude: ​“An opinion predominates among nautical men, that latitude observations, when carefully made, are not liable to error. This opinion seems to be fallacious: for, in comparing the latitudes of various places, carefully observed by different persons, a disagreement of two or three miles is frequently perceived.” This scepticism was borne from personal experience when in 1786 he had been aboard the ​‘Atlas’ as first mate, which ran a ground due to the poor quality of the charts on board.

The fine pictorial title cartouche is of particular interest. It depicts the Great Ladrone Islands, were an accurate meridian line is marked on the chart; and the Cape of Varela — marked ​“Cape Avarella” — and also know as Cape Pagoda, due to its striking resemblance to that building. The Cape is situated at the lower left of the chart along the Vietnam coast, and was said to be visible from 60 nautical miles. The representation of a pagoda above the title, is most probably an allusion to the cape.

Rare the OCLC only records two institutional examples: that in the National Maritime Museum and the other in the National Library of Australia, both with additions to 1815.