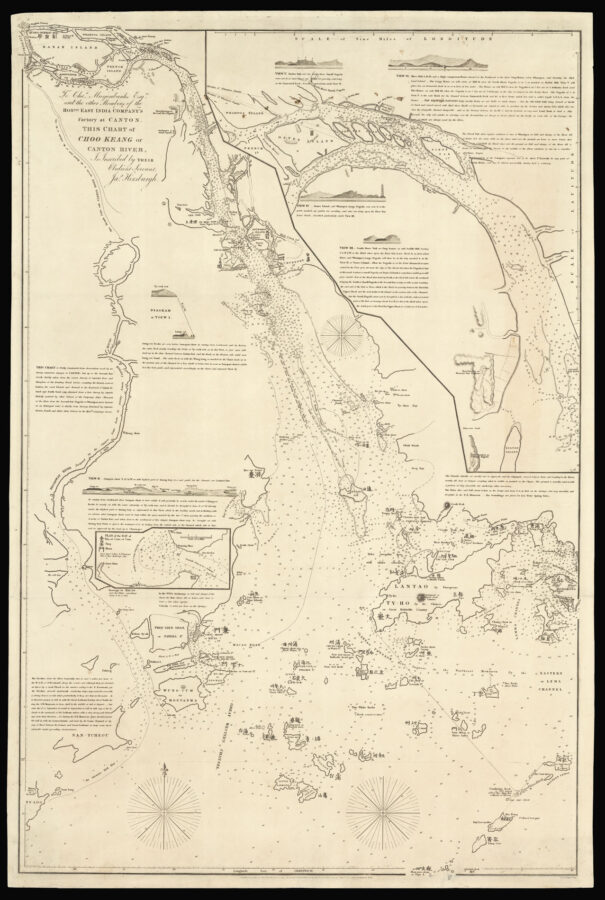 To Charles Marjoribanks Esq. and the other Members of the Honourable East India Company’s Factory at Canton. This Chart of Choo Keang or Canton River

The chart stretches north to south from Canton (Guangzhou) to Canzhou Island, and west to east from Dashi Bay to Hong Kong. The chart was first published by James Horsburgh in 1831, and the present edition has been corrected and updated to 1847. The chart has been heavily revised to incorporate the latest surveys, principally by Edward Belcher, who surveyed the waters in 1840 (published by the Admiralty in 1846). Chinese characters have been added to denote place names; the whole of the Pearl River has been re-engraved, with numerous soundings, banks, and shoals added. The revision extends to the large inset chart which provides information on the upper part of the Pearl River delta, with many of the pagodas and landmarks referenced in the charts text having been removed. To the lower left an inset chart of the Bay of Cum-Sing-Moon, from a survey by Captain Rees in 1833, has been added. Hong Kong and the Island of Lamma have been redrawn with Victoria named, and mountains, and bays marked. The extensive descriptive text remains unaltered.

James Horsburgh (1762–1836) hydrographer to the East India Company, the foremost surveyor of Chinese waters of his day, was born and raised in the coastal town of Elie in the county of Fife. At the age of 16 he entered the naval profession as a humble cabin boy. He spent the majority of his formative years out in the Far East. On a return trip to London, in 1786, as first mate of the ship Carron, he made the acquaintance of Alexander Dalrymple, hydrographer to the East India Company and the British Admiralty. So impressed with Horsburgh’s work was Dalrymple, that he undertook to publish the charts and sailing directions that he had compiled. Horsburgh would later return to England on a permanent basis in 1805, were he would publish his East India Pilot, a work containing fifteen charts, which he produced between 1805 and 1815, and covered the navigation from England to the China Sea. It was these charts, together with his comprehensive ​‘Directory for Sailing to the East Indies’, that would gain Horsburgh the position of Hydrographer to the East India Company in 1810; a post he would hold until his death in 1836.

Rare OCLC records two institutional examples of the chart, one dated 1831 housed at Harvard, and the other dated 1847 (as in the present example) in the University of Wisconsin. The chart is not recorded in ​‘Charting the Pearl River Delta’, published by the Hong Kong Maritime Museum, in 2006. 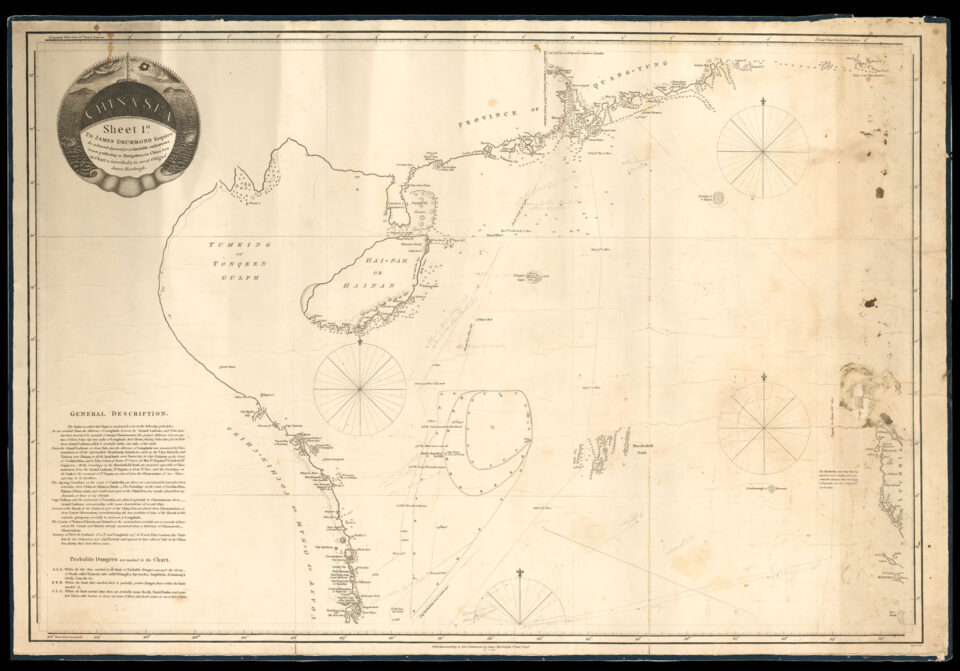 James Horsburgh 1st, Jan. 1806.
China Sea. Sheet 1st. To James Drummond Esquire In acknowledgement for his laudable endeavours towards perfecting the Navigation of the China Sea this Chart is inscribed by his most Obliged James Horsburgh.