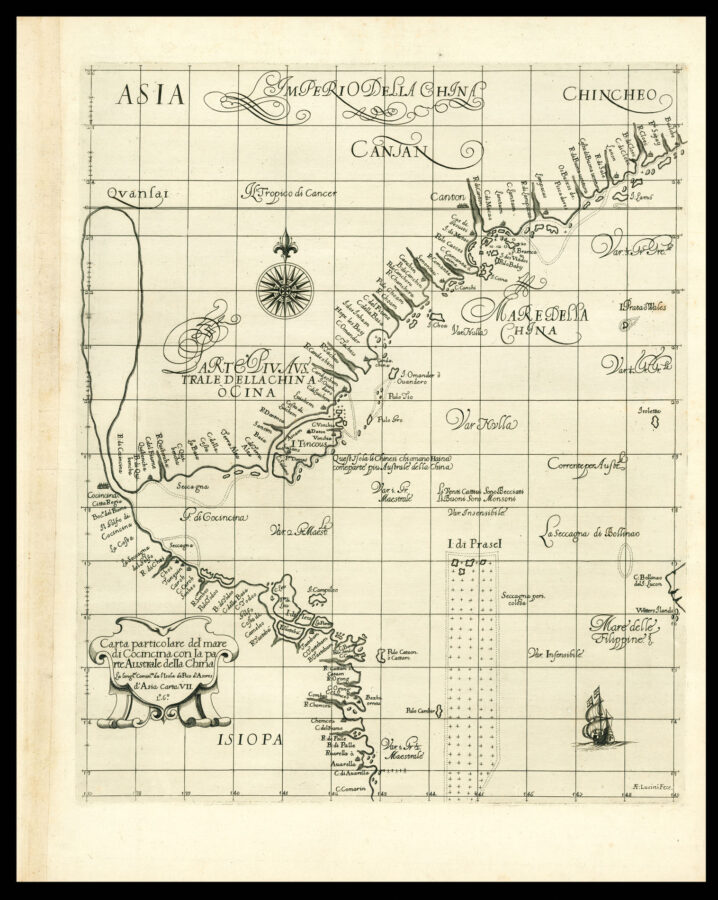 A fine example with a strong impression of this elegantly engraved chart, the earliest to focus on the southernmost part of the coast of China that includes Hong Kong and Macao; the chart also includes the northern coast of Vietnam. The city of Canton (Guangzhou) is shown, as is the mouth of the Pearl River; Hainan Island appears in a somewhat distorted form; and a large lake feeds a ​“R. De Cocincina”.

The chart appeared in the Arcano del Mare, a landmark of nautical cartography that was the first to use the Mercator Projection in a sea atlas, also the first to show prevailing winds and currents in the main harbors and anchorages, and the first to give magnetic declination. Thus, Dudley’s was the first nautical atlas with worldwide coverage that could actually be used for navigation. In their visual character, Dudley’s charts are utterly unique and are especially notable for their ornate calligraphic lettering and understated but fine decorative details.

Dudley was one of the most colourful figures among early mapmakers. He was the illegitimate son of Robert Dudley, Earl of Essex, one-time paramour of Elizabeth I. The younger Dudley attempted to lead a voyage to China but was rebuffed in this by Elizabeth. He had to settle for backing a failed voyage in 1596 by Benjamin Wood to Southeast Asia. So, not able to secure a position in England commensurate with his abilities due to his illegitimacy, Dudley made his way to Florence, where he became a valuable courtier to the Medicis, supervising several important engineering projects, and also finding the time to produce his magnificent atlas.