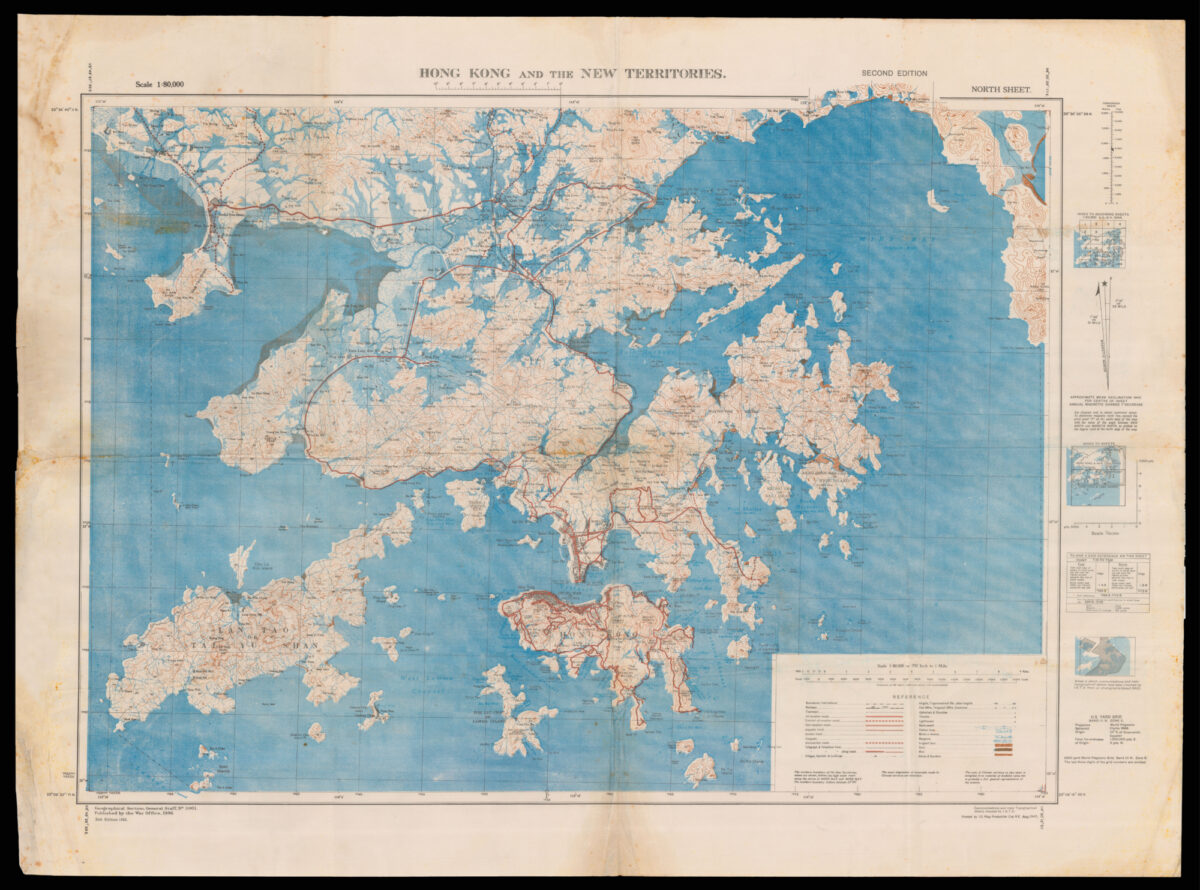 An important map of Hong Kong and the New Territories published by the British War Office in 1945.

Following the end of the First Opium War in 1942, China ceded Hong Kong to Great Britain and the island became a Crown Colony of the extensive Empire. Throughout the following decades, Britain guarded the territory closely, becoming increasingly concerned about the security of its port, which was essential for trade. The government therefore decided to create a buffer zone around the island to defend it against incursions from the nearby Chinese areas. The first part of this buffer was formed by Kowloon in 1860, when Britain took control of the peninsula in the aftermath of the Second Opium War. Further reinforcement came in 1898, when Britain gained a 99 year lease for 200 small islands surrounding Hong Kong, which were henceforth known as the ​“New Territories”. 86 years later, Margaret Thatcher agreed that Britain would return both Kowloon and Hong Kong, along with the New Territories, at the end of this period, as indeed happened in 1997.

This map, which shows Hong Kong, Kowloon and the New Territories, was first published by the British War Office in 1936. The present example, a second edition, was published shortly after the end of the Second World War, when Britain reoccupied the islands following four years of Japanese occupation. Thick red lines across the map indicate the ​“all weather roads” that could be relied upon for travel and communications across the region.Extending from Lantau Island to the west to Mirs Bay in the east, from the Chinese city of Shenzhen in the north to the southern Soko Islands, it is generally considered one of the most detailed maps of Hong Kong made in the early twentieth century.

Established in 1857, the British War Office was the governmental department responsible for the administration of the British Army until 1964, when its functions were transferred to the Ministry of Defense. During this time it produced many maps, with the number of publications increasing rapidly during years of conflict. The map of Hong Kong and the New Territories ran to three editions, and while the present example is to be found in institutions worldwide, it rarely appears at auction.