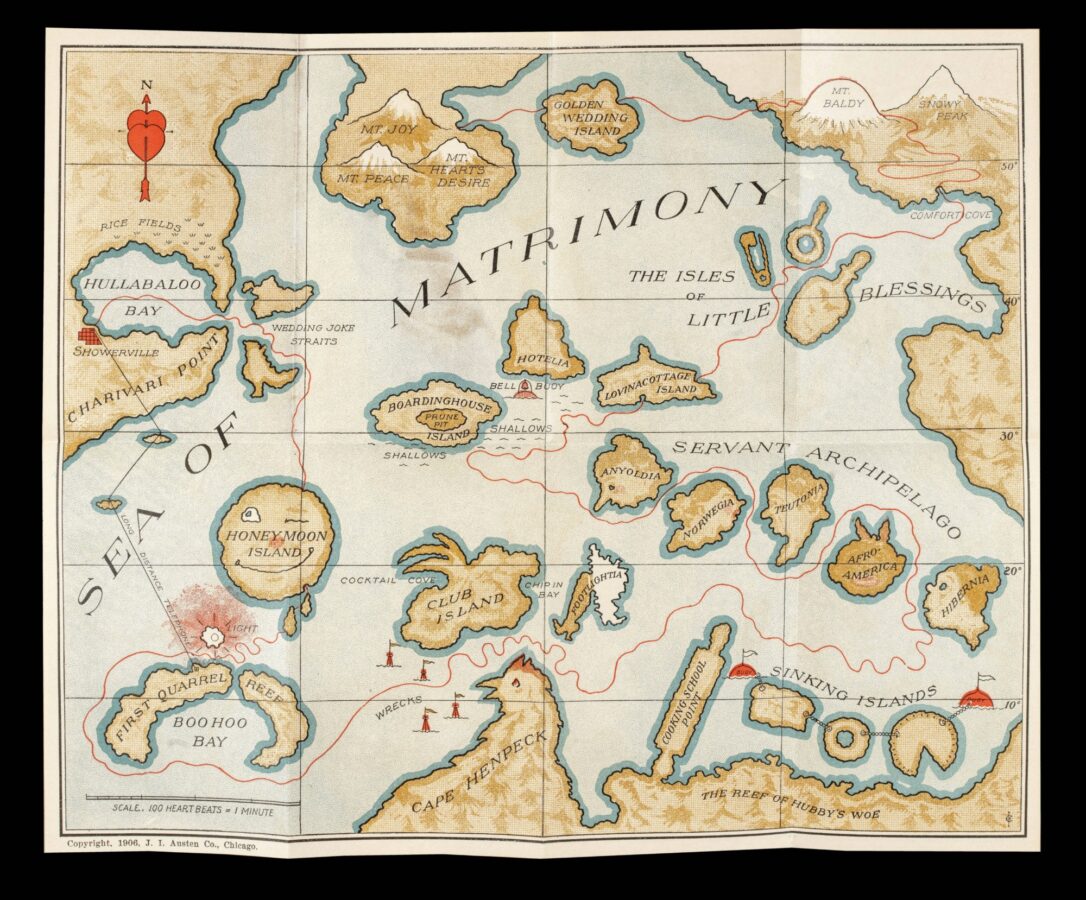 A humorous guide to matrimony.

The traveller’s itinerary is printed to the inside covers:

​“Starting at Hallaballo Bay, in clear water, the sailing is fine, and bright passing through Wedding Joke Straits and to your first stopping off point, Honeymoon Island. Leaving that place and touching First Quarrel Reef’ you still are in shallow waters and as the telephone connections can be had with Charivari Pont its is advised to keep in cabin until Boohoo Bay has been passed. By this time you will be on your ​“Sea Legs” but are cautioned against Cape Henpeck, Club Island and Footlightia near Chip-in-Bay, where many a good sailor has been wrecked.

Passing these points on your journey, danger again scented along Cooking School Point and Sinking Islands near the tenth Meridian. If surviving these danger lines, great care must be exercised in navigating along the Servant Archipelago.

Pirates, tyrants and great luminaries abound in these Islands and it is indeed a skilful Navigator who can steer clear in these waters. Shallow water is again encountered at Boarding House Island, Hotelia, and Lovinacottage Island and when once rounded the balance of the journey promises well.

Good cheer and happiness arises when in sight of The Isles of Little Blessings.

By this time and when Comfort Cove is reached, the 50th meridian line is seen by the glasses and in the distance hove Snowy Peak and Mt. Baldy.

The journey through the Sea of Matrimony nears its close when Golden Wedding Island is touched. When a landing is made at Mt. Joy your journey will have ended.

The route shown herein gives the clearest and most entrancing views of the majestic peaks, which are never lost to view. While high speed has been attained in the voyage, we hope it has not been at the sacrifice of safety and comfort. At an average of ten lovers knots per hour, Golden Wedding Island should be sighted on schedule time and the final passage to the land of Joy and Peace and Heart-Desire should be in clear water and in easy sailing”.

The journey provides a fascinating look at the matrimonial mores in America at the time: jokes at the bridegroom’s expense where becoming common, as where honeymoons; the couple must avoid henpecking and retreating to ones club, although ​‘Cooking School Point’ was clearly the woman’s domain. The raising of children was still the principal reason for marriage as can be seen by a series of islands in the shape of a nappy pin, rattle, and milk bottle just off Comfort Cove. Golden wedding island speaks of growing life expectancy, and with old age bringing joy and peace. Alas casual racism can be seen in the outline of ​‘Afro-America’ island.

J. I. Austin & Co. of Chicago had by the turn of the Twentieth century become one of the leading postcard publisher’s in America. They also produced short story books and pamphlets. 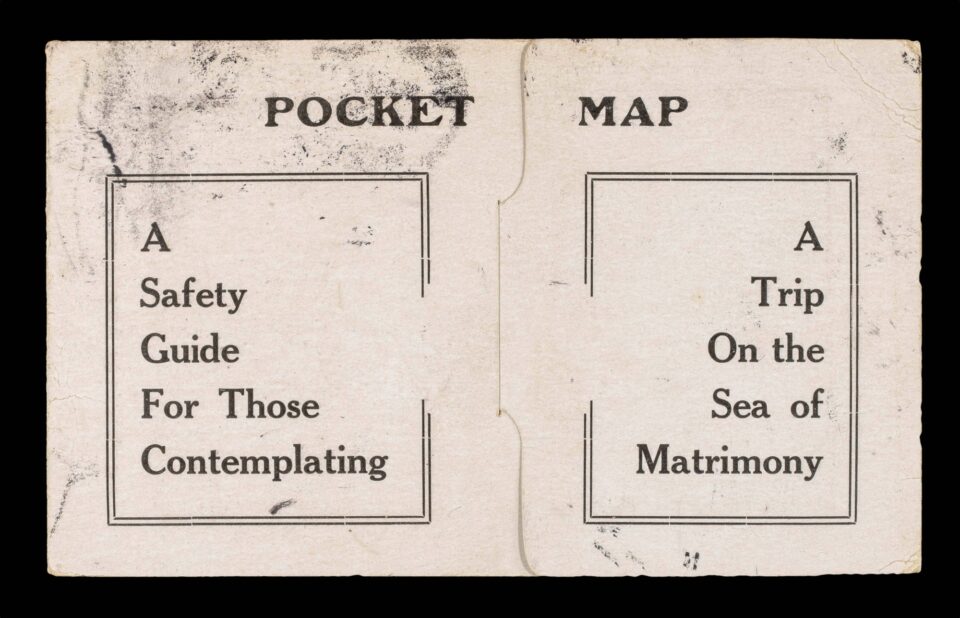