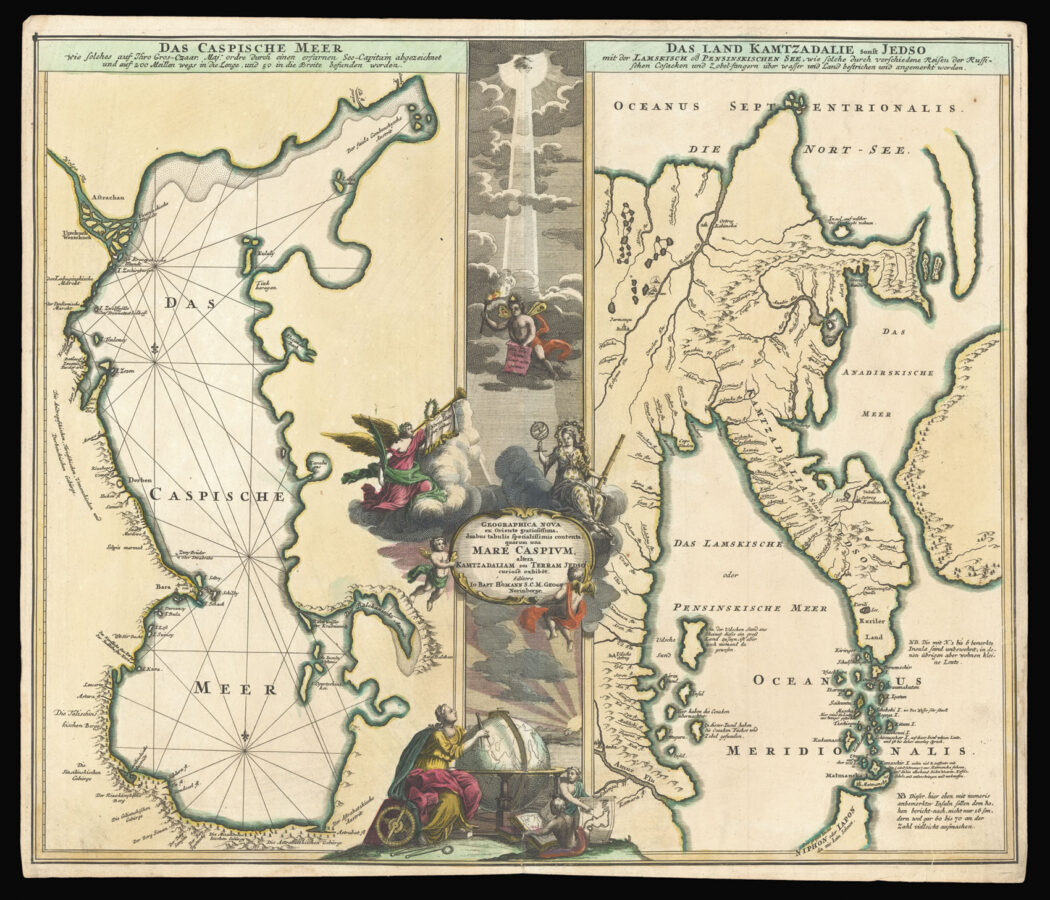 Homann’s map of the Caspian Sea

The two maps on the sheet show the Caspian Sea and the Kamchatka Peninsula, the two opposite limits of Asia. The Caspian Sea forms part of the western border between Asia and Europe, and Kamchatka is the point furthest east in Asia.

Kamchatka was still an unknown entity at the time of the map’s production: a preliminary Russian expedition in 1697 under Vladimir Alassov had nominally taken control of the peninsula, finding a colony of Japanese shipwreck survivors in the process. This discovery led to the ongoing misconception that Kamchatka was part of Jedo (also known as Jedso or Yedso, now Hokkaido), a northern island in the Japanese archipelago, as shown here. It also provided a spurious basis for Russian imperial ambitions in the area. The map also includes the imaginary island Matsumai (named Matmanska here). The two unmarked bodies of land to the left represent the lands supposedly seen by Jean de Gama, known variously as Compagnie Land, Terre de Compagnie, Gamaland, or just Gama.

Homann’s work influenced the map included in Engelbert Kaempfer’s ​‘History of Japan’ (1727), which would in turn provide the basis for European mapping of the region for the next half a century.

The large allegorical cartouche dividing the two maps shows divine light shining down on to a globe studied by a cartographer. The globe is turned to show Asia. The two boys next to the globe hold an atlas and a ma of Japan: in the map, the Noto Peninsula is incorrectly shown facing west, a mistake which appeared subsequently on several maps.

Johann Baptist Homann (1664–1724) was a German map publisher. He founded his publishing firm in Nuremberg in 1702 after studying in Vienna. He was appointed imperial cartographer to the Holy Roman Emperor, Charles VI, in 1715, and became a meber of the Royal Academy of Sciences in Berlin in the same year.