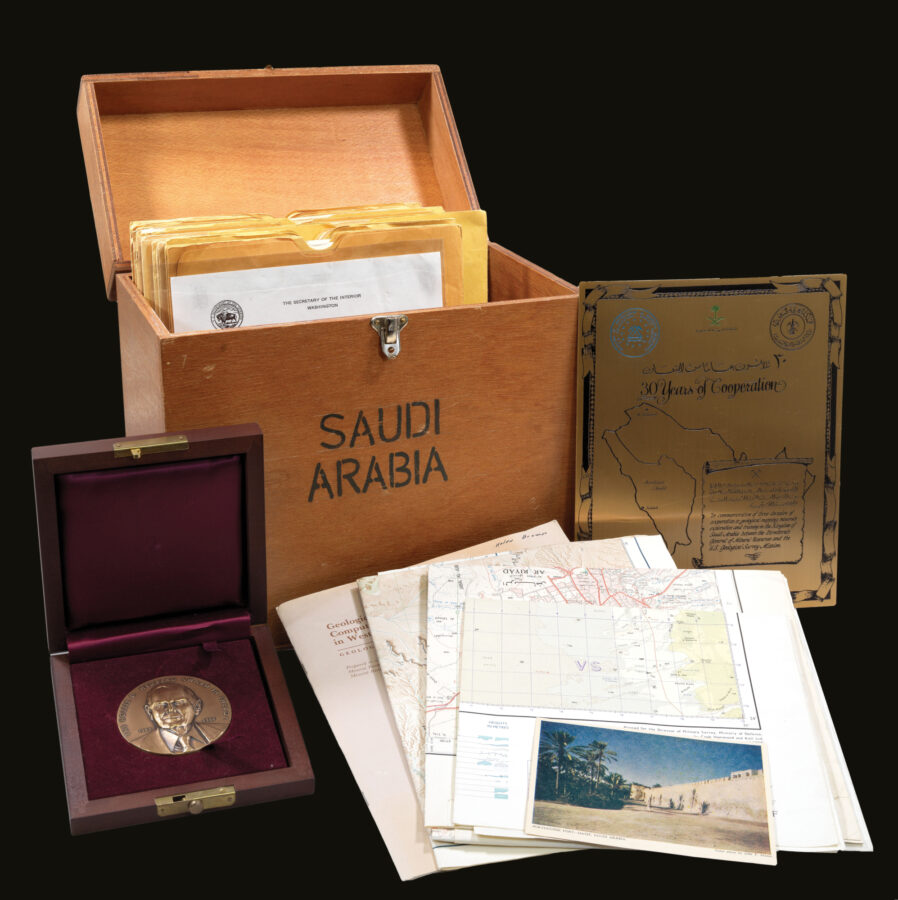 The map case belonging to Professor Glen F. Brown, the leading American geologist working in Saudi Arabia in the mid-twentieth century. His contribution to the geology of the region was vital for the wealth and prosperity of Saudi Arabia and the surrounding regions.

Although the hunt for oil, gas and minerals ultimately drove geological survey work across the region, in its early years it was the need for continual water sources which was the catalyst for Saudi Arabia’s resource exploration. In 1944 King ​‘Abd al-‘Aziz approached the United States for a technical expert who could assist with the identification and plotting of the kingdom’s natural resources, particularly its groundwater reserves. Glen F. Brown, who undertook the task and is responsible for the maps with this case, was one of the pioneers of a partnership between the United States Geological Survey (USGS) and the government of Saudi Arabia. This collaboration was one of international importance, spanning the next five decades and influencing the development of the kingdom significantly. By 1954, the Saudi Ministry of Finance, United States Geological Survey (USGS) and Aramco were working together to produce the first full series of geographic and geologic maps of the country. The first of their type in the Peninsula, were published between the late 1950s and early 1960s in both Arabic and English copies.

The information these maps contained formed the basis of subsequent Saudi national development plans. To this day, all modern maps of the kingdom trace their roots back to these publications.

The box contains 30 geological maps (of which 29 are housed within their original sleeves) on a scale of 1:500,000. The maps were produced in two versions. The sheets marked with the suffix ​‘A’ combine geology and geography, whilst ​‘B’ showed just the geography. The sheets marked by the prefix ​‘GM’ are reprints of earlier maps, whilst the prefix ​‘AP’ denotes maps of the whole of the Arabian peninsula.

As well as the geological maps the box also contains: a paper on the use of computer enhanced imagery for the mapping of western Arabia; Glen Brown’s Distinguished Service Citation letter from the State Department; Glen Brown’s 1995 Hollis D. Hedberg Award medal and programme; the Geological Society of America’s memorial service programme for Glen F. Brown; Brown’s New York Times obituary; a brass plaque commemorating 30 years of Saudi American co-operation; and a postcard of the Portuguese fort Qatif.

1. U.S. DEPARTMENT OF THE INTERIOR Geological Mapping by Use of Computer-Enhanced Imagery in Western Saudi Arabia. Washington, 1982. 4to (290 by 230mm), paper covers, 10pp., 2 folding maps housed in sleeve,

Although individual geological maps of the Arabian peninsula do come to the market from time to time, it is unusual to have such a large collection, especially with a link to Glen F. Brown, the geologist responsible for the most detailed mapping of Saudi Arabia to date. 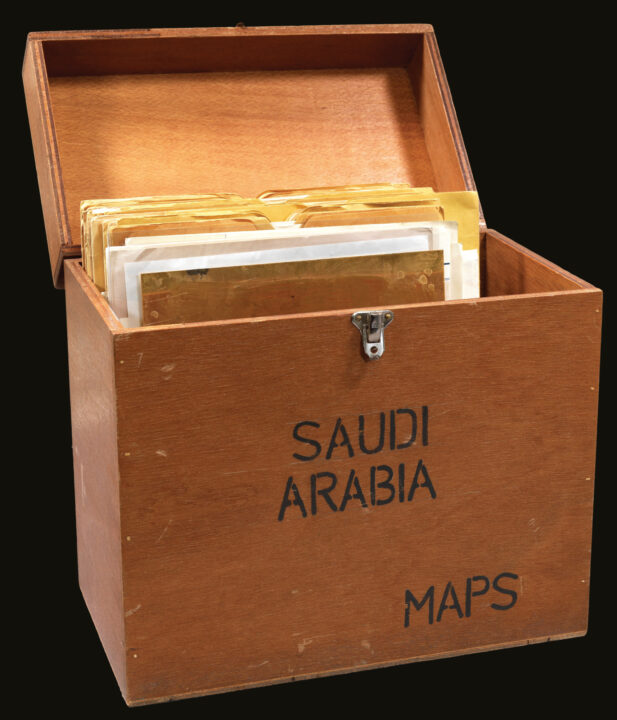 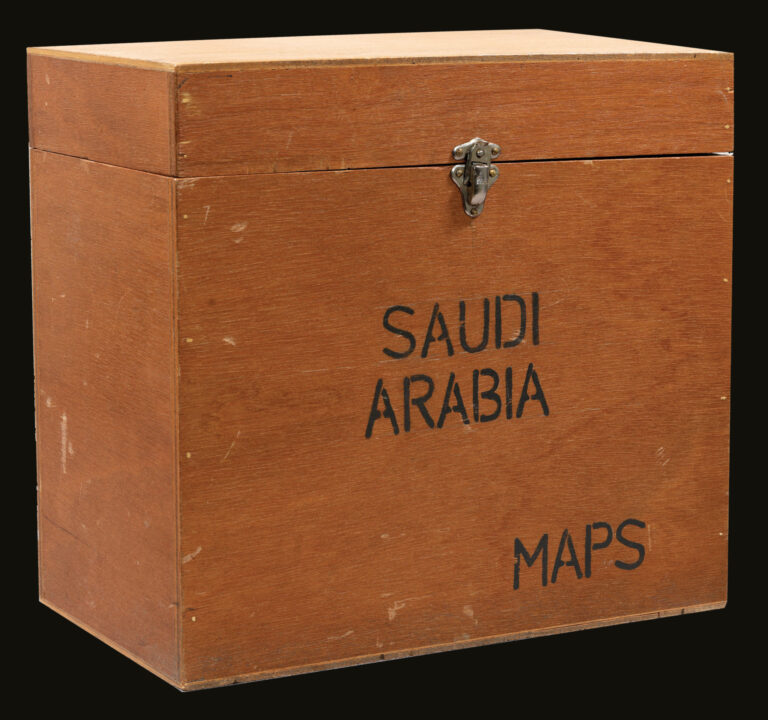 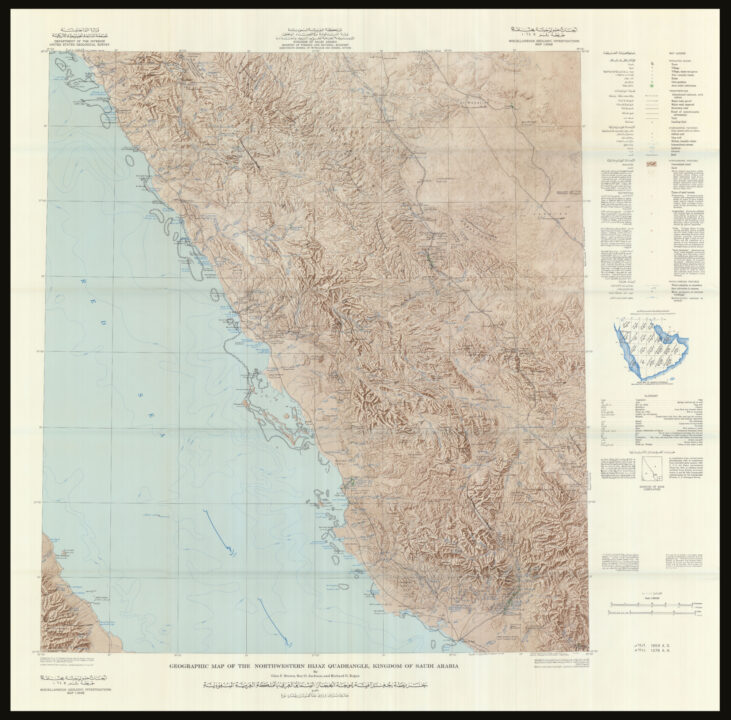