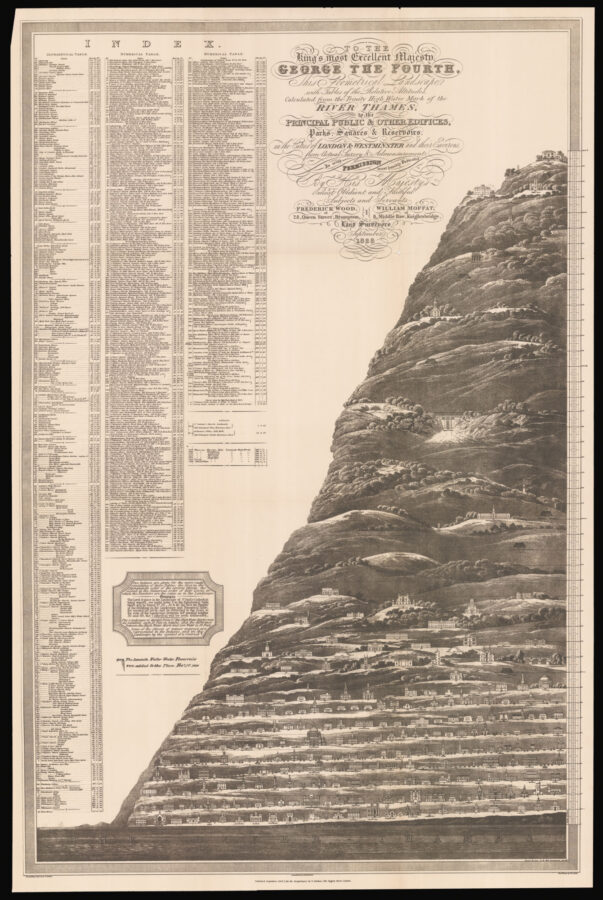 High tide on the Thames

Rare geometrical landscape of the altitudes of the main buildings, parks, squares and reservoirs in London and Westminster and environs, calculated from the Trinity High Water Mark of the river Thames. It is based on the survey and measurements carried out by land-surveyors Frederick Wood (1807–1893) and William Moffat, and is dedicated to King George the Fourth (1762–1830).

It contains two indexes on the left, the first in the alphabetical order of the several objects and the second in the numerical order of their levels, in which the numbers are the same as in the landscape. The landscape is divided from 0 (the High Water Mark) into 44 parallels, each 10 feet in height and the difference between the High Water Mark and the Low Water Mark is 18 feet. For example, Saint Paul’s Cathedral is places on parallel number 6 in the landscape, its altitude being 52 Ft, 8 In and 40 Pts.

It was aquatinted by established artist Robert Havell Jr. (1793–1878), buildings and text engraved by George Gladwin (1821–1854 active) and W.A. Lind respectively, and published in September 1828 (for the proprietors) by J. Gardner, 163 Regent Street London.

The broadsheet was also printed in June of 1828.

Rare: We have been able to find two examples in public institutions (The British Library, Glasgow University) and no examples at auction in the past twenty years.