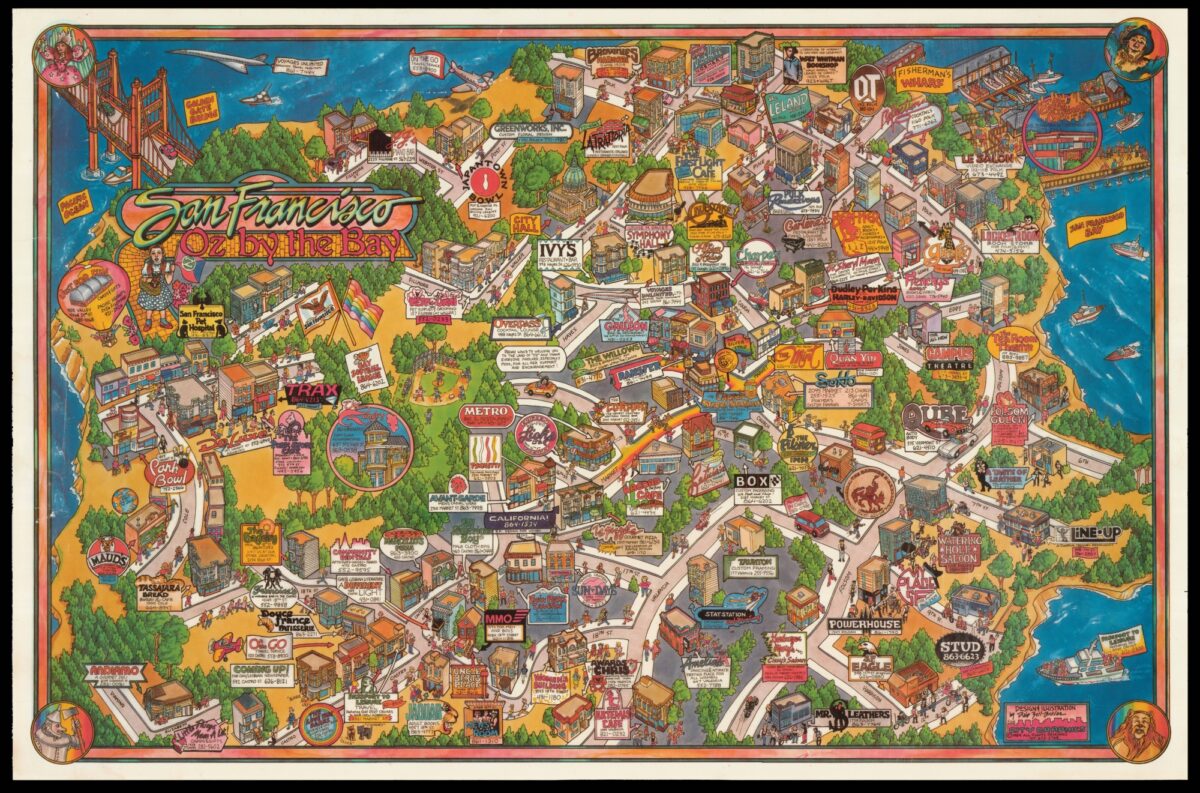 Helloooo Frisco: A Map for Friends of Dorothy

San Francisco: Oz by the Bay.

A fanciful pictorial map of San Francisco, here dubbed ​‘Oz by the Bay’, featuring famous and prominent landmarks and private businesses. Each of the four corners of the map house a vignette of a principal character from the novel ​‘The Wonderful Wizard of Oz’ (1900); clockwise, The Scarecrow, The Lion, The Tinman and The Good Witch. The protagonist, Dorothy, can be seen carrying her dog Toto in a basket while standing on the ​‘Yellow Brick Road’, just below the title in the upper left hand corner of the map. The title is a reference to ​“Baghdad by the Bay,” a nickname for the city coined in the 1940’s by newspaper columnist Herb Caen, likely referencing the city’s multicultural exoticism, though perhaps also an implication that the city’s moral character resembled that of Babylon. The map spans the city’s peninsula, with the Pacific Ocean to the west, the Golden Gate Bridge to the north and San Francisco Bay to the East.

Rather than a geographically accurate map of the city, it is instead a whimsical illustration of colourful advertisements, with emphasis on pro-LGBT businesses and attractions. From iconic restaurants to the Haight-Ashbury and from Symphony Hall to Maud’s bar, which claims to be the oldest bar in the world for women, the map’s illustrations and landmarks reflect a relaxed perspective regarding lifestyle within the city. San Francisco’s reputation of being one of the largest LGBT communities in the world fits suitably into its likeness to Oz. Frank L. Baum’s books, and even more so the 1939 film starring Judy Garland (note that this map was published in the year of the film’s 50th anniversary), have a particular resonance among the queer community, with the story seen to mirror the difficulties, and eventual rewards, of coming out — a journey from black-and-white puritanical Kansas to the Technicolor World of Oz. In fact, Garland’s celebrated rendition of ​“Somewhere Over the Rainbow” is often credited with helping to propel the rainbow flag to its current status. The LGBT rainbow flag can be seen flying with the San Francisco Flag below the Map’s title.

Rare. We were only able to trace only one institutional copy held by UC Berkeley, and no record of auction sale.