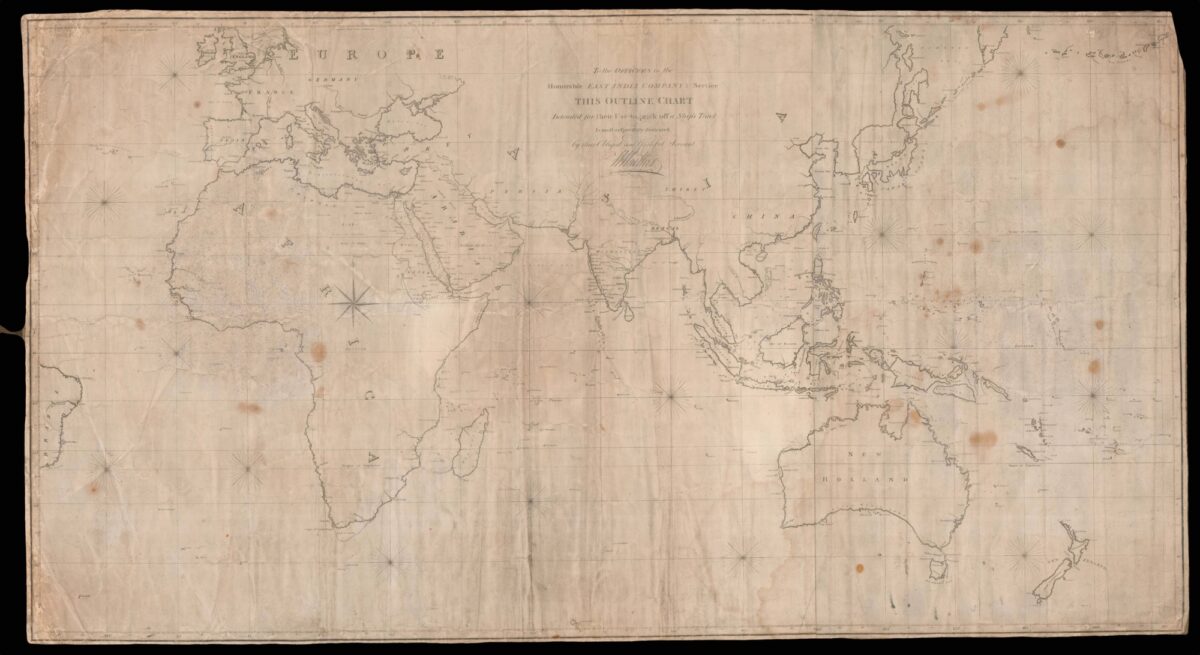 To the Officers in the Honourable East India Company’s Service This Outline Chart Intended for their Use to Prick Off a Ship’s Track Is most respectfully dedicated by their Obliged and Grateful Servant, W. Heather.

Rare chart published for use aboard East India Company ships, in order to mark a ships track.

The East India Company operated under a variety of names from its founding in 1600 until it was dissolved in 1874. It was formed to maximise British trading opportunities in southeast Asia, particularly the Indian subcontinent, and eventually expanded to manage trade with China and the far east as well. Although nominally a body to regulate and exploit trade, the East India Company became increasingly involved in politics over the course of the eighteenth century, and as a result was often faced with opposition. Nonetheless its powerful influence continued to be felt, and it held a monopoly over trade until well into the nineteenth century.

At the time the present chart was made, the East India Company was still at its height, with a private army around twice the size of the British military forces, and with extraordinary revenues of many millions of pounds. In fact, large swathes of India were effectively ruled by the Company through the use of its private army. With ships constantly sailing back and forth between Britain and Asia, it was essential to ensure smooth and efficient passages. To this end, blank charts were produced for the sailors of the East India Company, which they could use as a template to plot their tracks through the sea. The present example identifies ports and harbours at which the ships might wish to stop off, as well as various shoals and reefs that could prove to be dangerous obstacles for the unwary seaman.

This 1802 edition has significant revisions — from the 1796 publication — to the west coast of Australia, and the addition of the Bass Strait between Austalia and Tasmania, first surveyed by Flinders and Bass in 1798.

William Heather (1764–1812) hydrographer and chartmaker to the East India Company, began producing prick charts for ships sailing to the east, as soon as the set up his business at The Navigation Warehouse, No. 157 Leadenhall Street, 1791. The earliest extant examples show only the route from England to India and China — the principle route taken by all East Indiamen. By the beginning of the nineteenth century the scope of the charts increases to include Australia, Japan, and islands in the Pacific. The charts would continued to be published by Heather’s successor John William Norie (1772–1843) and his partner Wilson until the end of the nineteenth century, by which time the seaman could purchase a chart of the entire world.

Early examples of Heather’s prick charts are particularly rare. We have only been able to track down one, of an earlier date — 1796 — than the current example, to appear at auction since the Second World War. We have unable to trace any institutional examples of the present 1802 edition.