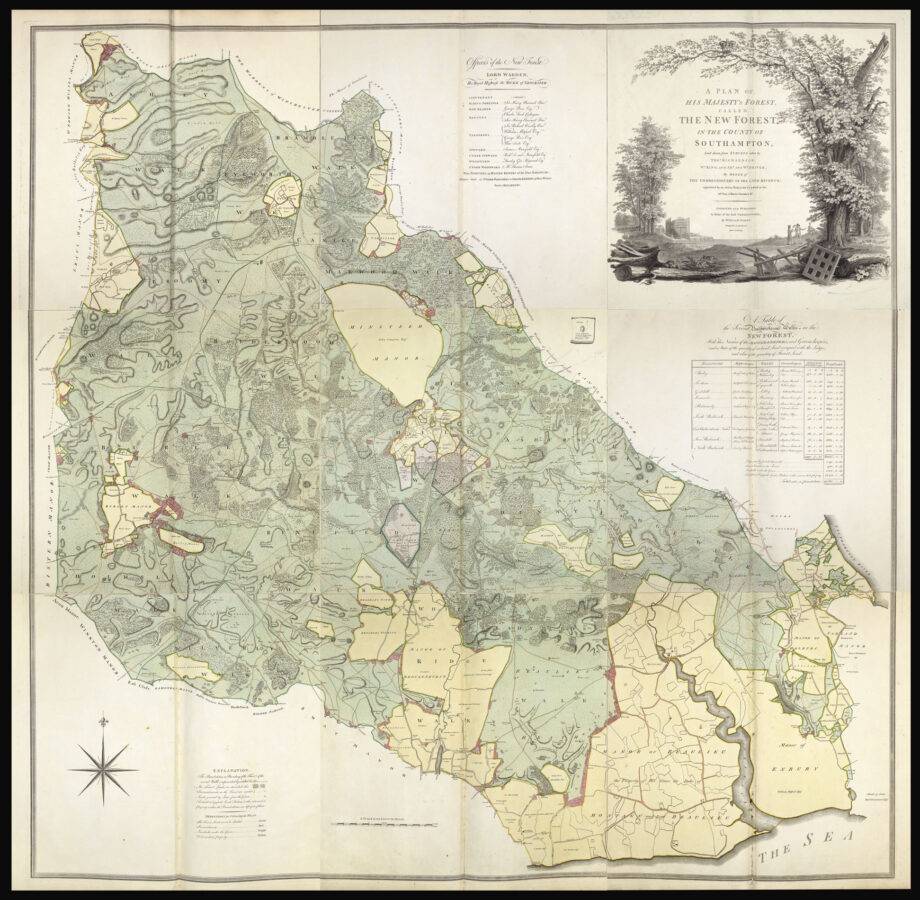 Hampshire — The first detailed survey of the New Forest

By [OUR HALF SHARE] RICHARDSON, Thomas; William KING; Abraham and William DRIVER, 1789

A Plan of his Majesty’s Forest, called the New Forest, in the County of Southampton Laid down from Surveys taken by Thos. Richardson, Wm. King, and Abm. and Wm. Driver, By Order of the Commissioners of the Land Revenue, appointed by an Act of Parliament passed in the 26th Year of King George III.

Rare large scale map of the New Forest published for the Board of Land Revenue.

​“Following Edmund Buke’s Plan of Economical Reform, there was a sustained interest in the forests. In 1782 the Earl of Shelburne appointed Sir John Call and Arthur Holdsworth to enquire into the state of the crown lands, woods, and forests, and a report was made to Parliament the same year. In June 1783 John Pitt, the surveyor general of the woods and forests, reported that except for the 1000 acres in the New Forest, no new enclosures had been made since 1772, and in the following month Morton Pitt, John Pitt’s son, introduced a comprehensive Bill for the better regulation of Forests, this containing provision for the completion of 6000 acres of inclosures in the New Forest, and within all forests of ​‘so many acres of the now open and uncultivated grounds… which may be spared from the Use of Commoners’, with planting no longer to be restricted to hard-wood trees but to include pine. This Bill was lost when Parliament was prorogued on the 16th July.

In 1786, on the advice of William Pitt, the king recommended to Parliament that an inquiry should be made into the condition of the woods, forests, and land revenues of the crown. In the Lords the ensuing Bill was depicted by Earl Bathurst as merely an inquiry into the rights of the crown respecting crown lands and forests, and it was carried on the third reading by 28 votes to 18. The commissioners appointed were Sir John Call and Arthur Holdsworth, who had conducted the previous inquiry, with the addition of Sir Charles Middleton, comptroller of the navy. Subsequently Holdsworth was replaced by John Fordyce, the surveyor general of the Board of Land Revenue. Between 1787 and 1793 the commissioners published a total of 17 reports of which the fifth, published in 1789, dealt exclusively with the New Forest. In preparation for this a survey had been made in 1787 by A & W Driver, T. Richardson, and W. King.[the present map].” (Stagg)

The map covers the whole of the New Forest on a scale of four inches to the statute mile. The map is superbly detailed with villages, farms, roads, rivers, enclosures, meadows, hills, forests, and land owners marked. The boundary of the forest is marked by a dotted line; encroachments on the Forest are marked by the letter ​‘i’ (coloured red); lands granted by lease from the crown the capital letter ​‘L’ (coloured purple); intermediate property is coloured yellow; with the forest lands are coloured green. To the right of the plan is a list of the Officers of the New Forest from Lord Warden the Duke of Glocester, to the Under Woodward; together with a table listing the Bailwicks and Roads, with the names of the Master Keepers, and Groomskeepers, and the state and quantity of the enclosed land, and forest land.

Rare we are only able to trace one example appearing at auction in the last twenty-five years. OCLC records three institutional examples: The British Library, The Bibliotheque Nationale de France, and the National Library of Scotland. COPAC records a further example at Southampton University. Roger records three others: Cambridge University Library, Public Record Office, and the Royal Geographic Society. 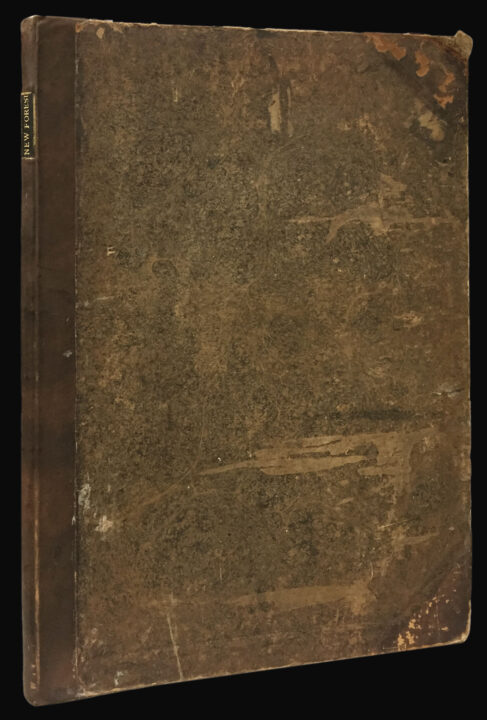