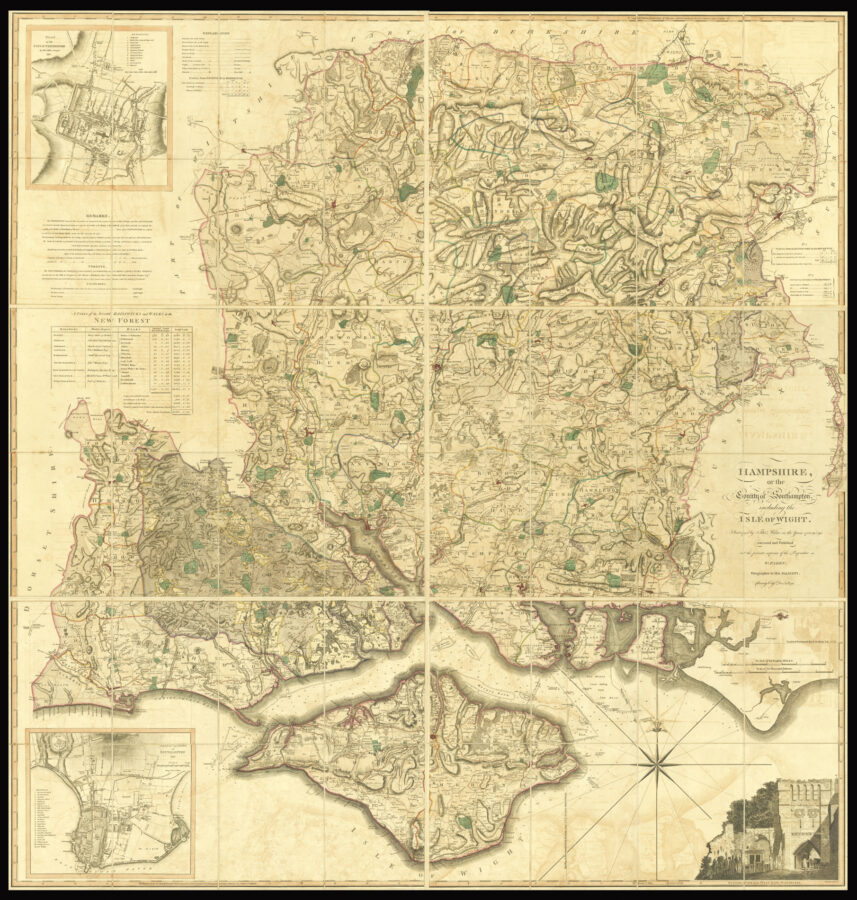 The first large-scale map of the county was published by Isaac Taylor in 1759; this was the only one of Taylor’s five county surveys not to be re-issued by Faden, who preferred to use the new survey by Thomas Milne, eith whom he had worked a year later on a survey of Norfolk. Though both maps of Hampshire show similar detail the neater engraving and outline colour to the hundreds combine to give greater clarity to Milne’s map, whilst the latter is alone in showing detailed distances between the major towns. Other details include the major roads, whether turnpike, open or enclosed, together with the minor roads and bridle paths, market towns, parishes, villages and farm houses, forests and hills, parks, commons and heaths, castles and inns, rivers and canals, lodges and gentlemen’s seats, and the boundaries of the county and the hundreds. Engraved notes draw our attention to the Andover to Redbridge Canal and the one fom Basingstoke to the River Wey, including the fall and length of each canal. A note in the ​“Remarks” acknowledges the influence on the scale of latitude of General William Roy, one of the main participants in the Trigonometrical Survey of 1745. There are detailed plans, with references, of Sothampton and Winchester on a scale of approximately 200 yards to one inch and a ​“Table of the Several Balliwicks and Walks in the New Forest” with theie respective acreages. There is a view of the West Gate, Winchester together with Faden’s usual calligraphic title piece, and the boarder is marked with the decrees of latitude and longitude from the Greenwich Royal Observatory. The survey includes a detailed map of the Isle of Wight and the Solent with its various bays, rocks, sandbacks, and wrecks, with various depths.

The single-sheet reduction is an interesting map in its own right, but surprisingly was never printed alongside editions of the large-scale survey; indeed it first appeared some five years after the publication of the six-sheet map. It is a true reduction of the latter and includes much of the information found on the larger map, including engraved notes, or legends, referring to the New Forest and the Aliceholt and Woolmer Forests, the major canals of the county and the method of colouring to be used dealing with the Forest Lands. There are two scale bars referring to English Miles and Thousand Fathoms.

Rodger calls for two editions of the six sheet survey, dated October 1st 1791 and December 1791. Both editions are rare.