Gotham in the Gilded Age

[Atlas of the City of New York — Borough of Manhattan].

A monumental fire insurance map of Manhattan, made at the tail end of the ​“Gilded Age”.

The phrase ​“gilded age” was coined by Mark Twain in his 1873 novel ​‘The Gilded Age: A Tale of Today’, which satirized the promised ​‘golden age’ after the Civil War, portrayed as an era of serious social problems masked by a thin gilding of economic expansion to the almost exclusive benefit of the robber barrons, such as the Astors, Carnegie, Frick, Mellon, J.P. Morgan, the Rockefellers, and the Vanderbilts. The era may also be defined culturally as the age of the Ziegfeld Follies (founded 1907), Henry James, Mark Twain, Edith Wharton, John Singer Sargent, and James Abbott McNeill Whistler, and architecturally, as depicted on the map, with icons such as Brooklyn Bridge (1883), Manhattan Bridge (under construction since 1901, but not open to traffic until 31 December 1909, a year following the map’s publication), the Flat Iron Building (1902), the New York Times Tower (1905), and Grand Central Terminal (rebuilt between 1903 and 1913).

Mapping for insurance, and specifically fire insurance, purposes had existed for a century before the Bromley map, first beginning in London in 1799 with Richard Horwood’s map for the Phoenix Assurance Company. In the decades following the Civil War, fire insurance mapping grew rapidly, mirroring the flourish of growth in the country, the rebuilding of the South and massive expansion westward. Factors such as the Homestead Act, railroad construction, the Second Industrial Revolution, and massive immigration to the United States all fostered huge population growths, urbanization, and heightened demand for mapping.

The first fire insurance map of New York was made by engineer and surveyor Wiliam Perris after the Great Fire of 1835. ​“Perris’ map included streets, blocks, tax lots, and current use classifications, as well as previous land uses, roads, and natural features. Although Perros pioneered the form, many others published fire insurance maps of the city, including Bromley and Company, Hyde and Company, G.M. Hopkins, and, most notably, the Sanborn Map Company, which produced finely detailed maps form the later 1800s to the 1950s” (The Encyclopaedia of New York City).

In the 1950s, consolidation within the insurance industry, modern building construction methods, improved fire protection, and a change in underwriting practice meant that demand for fire maps gradually waned, and their publisher’s perished. Today, however, such maps are invaluable resources for historical research, genealogy, planning, conservation and demography. 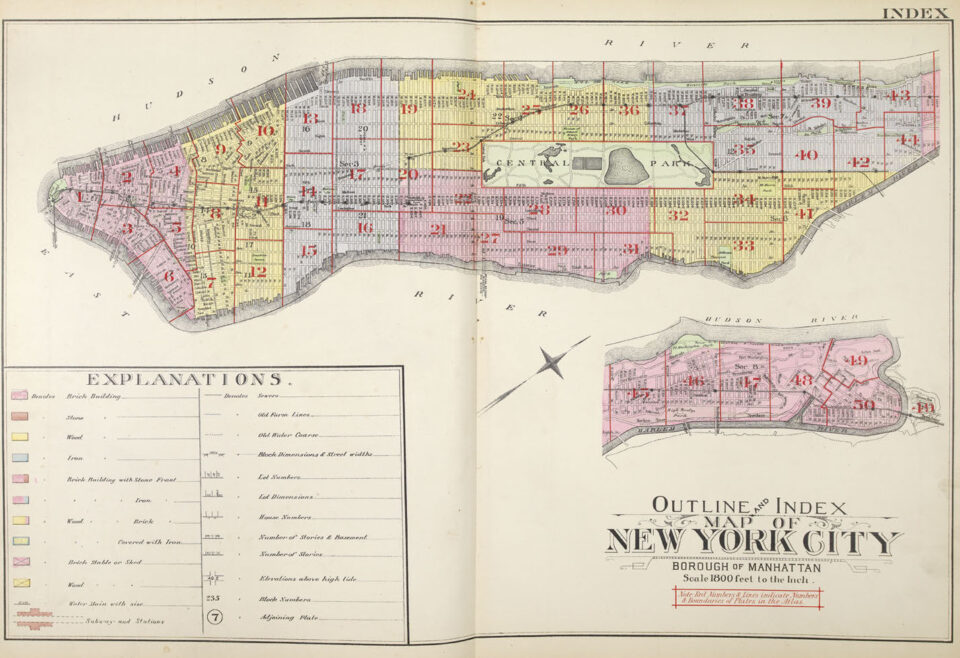