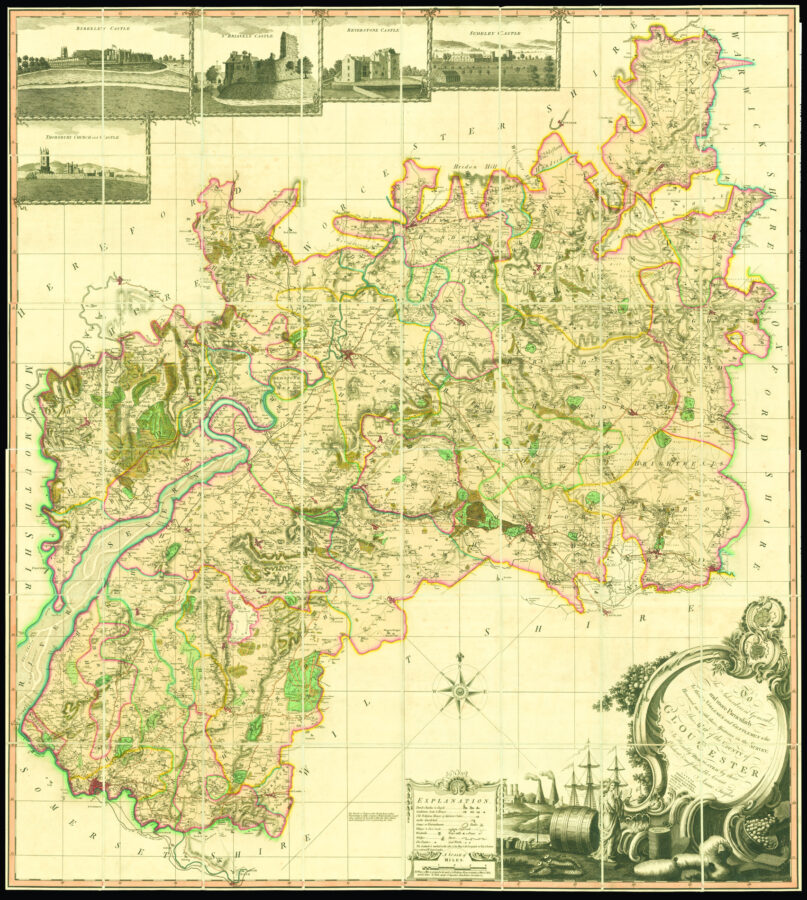 [Gloucestershire] To The Subscribers in General and more Particularly To those Noblemen and Gentlemen who Honoured me wth their Assistance in the Survey; This Map of the County of Gloucester Is Humbly Dedicated by their Obedient & most humble Servant, Isaac Taylor.

The last of Taylor’s five county surveys, it possibly exceeds the high standard of its predecessors with its increased clarity of engraving and more ichnographical detail in the delineation of the towns and cities. The magnificent cartouche encompasses an entire sheet and combines the title, dedication, explanation, scale of miles and compass rose. The map is dedicated to ​“The Subscribers in General and more Particularly to those Noblemen and Gentlemen who Honoured me with their Assistance in the Survey”. A neat addition states that ​“Estates are Survey’d and Mapped in very Accurate and Neat manner at ye usual Prices. Also Maps Reduced and Drawn in the manner of Engraving”. The fine detail includes the division of the hundreds, cities, towns and villages, closed and open roads, parish churches and chapels, gentlemen’s seats and houses, old religions houses, demolished castles and battles, rivers and bridges, water-mills, windmills and forges, coal works and fire engines. The top two sheets include large topographical views in the manner of his maps of Dorset and Hampshire — in this instance of Berkeley Castle, St Briavel’s Castle, Bryanstone Castle, Sudeley Castle, and Thornbury Church and Castle. One of the most endearing features of the map is the meticulous depiction of the buildings: whether they be churches, farm houses, gentleman’s seats or just houses an attempt is made to reflect the size and architecture of the structure. Taylor continues to use the caterpillar type of hatching for to show hills first used by him on his map of Hampshire in 1759. The lines of latitude and longitude, not always apparent on large-scale maps, were common for all of Taylor’s surveys, whilst the River Severn, from the Bristol Channel to Gloucester depicts sandbanks and the passages through them.

The map was first published by Taylor in 1777; the plates were later acquired by William Faden, who published the map in 1786, and again in 1800 — the present example. All editions of the map are rare.