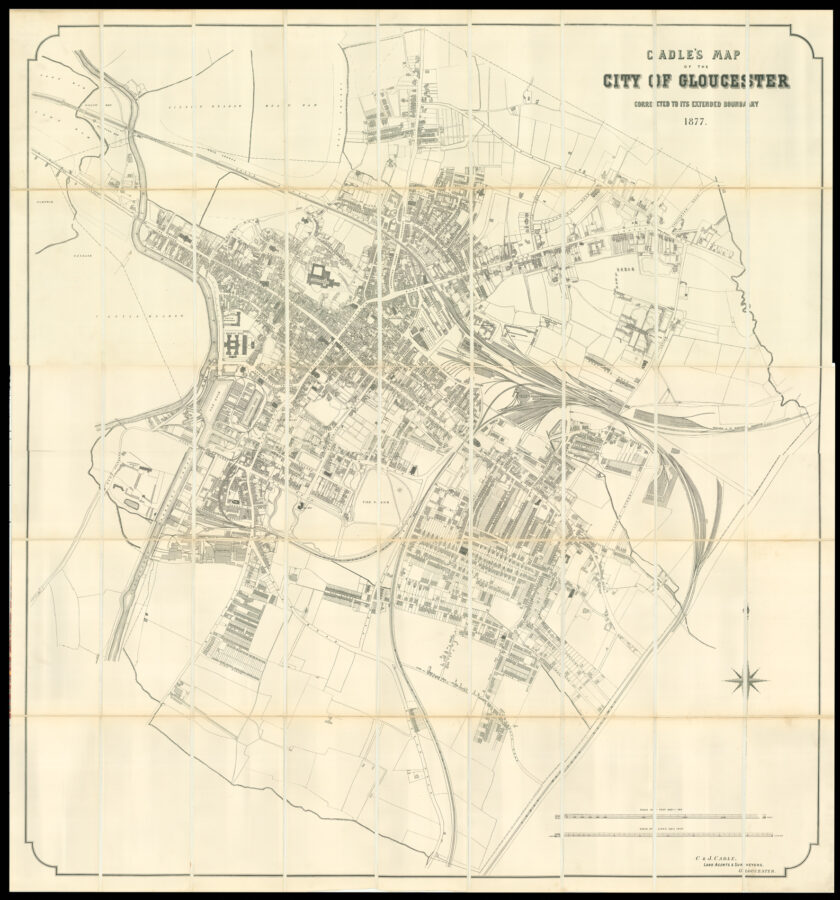 Cadle’s Map of the City of Gloucester Corrected to its Extended Boundary 1877.

With increasing interest in the development of towns and urbanisation in England, the urban topography and growth of Gloucester has attracted significant attention. Surviving street plans and property boundaries, rarely recorded in detail, represent valuable documentary evidence and, as such, Cadle’s map of the city of Gloucester dated 1877, makes a major contribution to our understanding of the urban landscape up to the industrial age. It is drawn on a scale large enough to show most of the houses plus the various factors that contributed to its importance as a major inland port where it vied with Bristol in influence. In this era the Wagon Works became a major producer of rolling stock, exporting to India, Argentina and Tsarist Russia. The Eastgate, Northgate and Westgate mark the ancient entrances to the city and provide the last remains of the Roman Wall and fortifications. The Militia Barracks were home to what was later known as the Gloucestershire Regiment. The river Severn dominates the western side of the city whilst the Berkeley Canal runs into the Old Dock and the Victoria Dock, as clearly demonstrated by this detailed plan of the city towards the end of the nineteenth century. The great Western and Midland Railway functioned through the city with the engine shed a prominent building. With clear evidence of its Romano-British origins and subsequent development through the Saxon and Medieval periods, the map shows evidence of the social and economic progress of industrial Gloucester as well as supplying clear indications of its trading and military importance.

As well as for their general academic and historic value, large-scale maps will command interest from local collections, both private and public, and those involved in historical education within the county of Gloucestershire.

Town plans of this period would invariably be informative rather than decorative — a simple calligraphic title, plus a scale. The map is ​“signed” by C. and J. Cadle, who were land agents and surveyors in Gloucester. The high mortality rate of large-scale plans such as this one, combined with the small number published, has resulted in few copies in existence today.