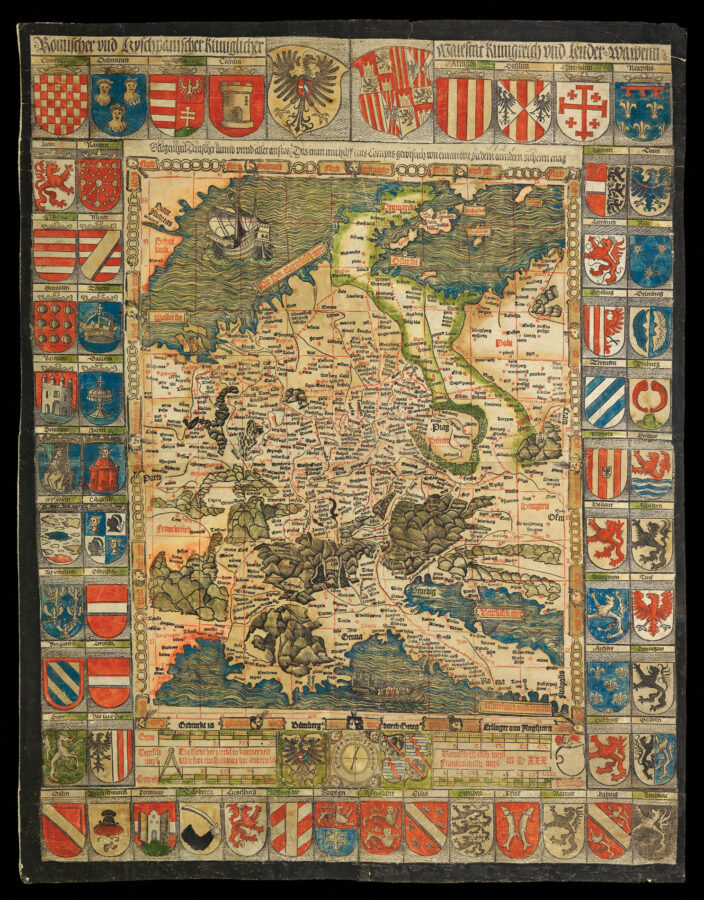 “Give me a map. Then let me see how much is left for me to conquer all the world.” Christopher Marlowe, ​‘Tamburlaine’.

Gelegenhait Teutscher lannd unnd aller anstos Das man mithilff eins Compas gewislich wie einem ortt zu dem andern ziehenn mag [The location of all German and neighbouring countries, so that with the help of a compass one may with certainty travel from one place to another] [Title to border:] Romischer und Hyschpanischer Küniglicher Maiestat Künigreich und Lender Wappen [The Roman and Hispanic Royal Majesty’s Kingdoms’ and Countries’ Coats-of-Arms].

The only known surviving example of Georg Erlinger’s map of central Europe. The map is not only one of the earliest published to specifically aid travel through Europe, but also the first separately published map to celebrate Charles V coronation as Holy Roman Emperor, in 1530; with the additional lands, Charles became the ruler of the largest European empire since classical times; an empire on which, it was said at the time, the sun would never set.

The map extends north to south from Edinburgh to Naples, and from west to east from Paris to Krakow. In look and extent the map bears a striking resemblance to Erlinger’s route map of 1515, titled ​‘Das heylig Romisch reich’. The 1515 map was a copy of Erhard Etzlaub’s seminal ​‘Rom Weg’ map of 1499, which was the first portable road or route map. Etzlaub published the map to cater for the large number of pilgrims who were to travel to Rome in order to celebrate the Christian Jubilee year of 1500. The map would not only prove to be hugely popular — with a subsequent edition printed in 1501 — but also have a profound influence on German cartography for the next 40 years.

Erlinger’s map of 1515 bore many of the features of the 1501 ​‘Rom Weg’ map: the map is orientated with south at the top; towns are marked by a circle; routes are marked by a series of dotted lines, with each dot representing one German mile (approximately 7.5 km); major cities are marked with a pictorial representation of the city. Bohemia is surrounded by large green forests, and mountains are depicted as ​“caterpillars”. On the left hand side are degrees of latitude, and to the right the daylight hours on the summer solstice — from 18 hours in Edinburgh to 15 hours in Rome.

Despite borrowing from Etzlaub, Erlinger also introduced his own innovations, the most striking of which was that the map was printed in both red and black. It was the earliest separately issued map to be printed in two colours. All the settlement signs, routes, names of countries, seas, rivers, and islands are printed in red. He also used a small line to link a settlement and its place name where the relationship might not be obvious, a feature later used by Gerard Mercator, and capitalized the first letter of settlement names to denote bishoprics.

The present map incorporates many of the features outlined above. It was first published in 1524, and then again in 1530. This is an example of the 1530 edition. Erlinger has made some notable changes, however, the most obvious being that the map is orientated with north at the top. He also dispensed with the pictorial icon to illustrate large cities, using a larger font size instead, and rendered mountain ranges more realistically. In terms of geography the map has both Ptolemaic and contemporary elements. The representation of the North and Baltic seas are essentially Ptolemaic, with both Scotland and the Jutland peninsula leaning far to the east. However, the delineation of the Mediterranean is clearly influenced by Martin Waldseemuller’s ​‘Carta itineraria europae’ of 1511.

Countries are marked in outline colour: red for France and Britain, light brown for Poland and Italy, with a light brown wash for much of the Holy Roman Empire. Denmark is outlined in green. Interestingly, the colourist extended the green to highlight the land between the Elbe and Oder rivers as far as Bohemia, although Denmark’s territory did not extend so far south. The sea is coloured blue and embellished with a caravel in the North Sea, and a Venetian galley in the Mediterranean.

The map’s primary function, like its forebear the ​‘Rom Weg’ map, was to aid travel between towns in Germany and the adjacent countries. To this end Erlinger has marked several routes. These include: Antwerp to Lubeck via Munster; Lubeck to Erfurt; Erfurt to Krakow; Erfurt to Antwerp via Koln; Erfurt to Wismar; Erfurt to Nuremberg; Nuremberg to Krakow via Vienna; Nuremberg to Rome via Augsburg and Trent; Nuremberg to Strasbourg via Stuttgart; Nuremberg to Villach via Saltsburg, Koln to Frankfurt via Mainz, and Koln to Speyer via Mainz. The map also bears a grid printed in red, which is numbered I‑IX on the west to east axis and lettered A‑M running north to south. The presence of the grid would suggest that Erlinger published an index to accompany the map, although we are unable to trace any extant examples.

The map is surrounded by a border of plaquettes linked by chains, with each plaquette bearing a wind head. Below the map is a compass flanked by two coats-of-arms and four scale bars of: Teutsch Meyl (German miles); Gemeyl (Walking miles); Romisch Weisch (Roman-Latin miles); and Frankreichisch meyl (French miles).

The scale bar also bears text next to a pair of compasses: ​“Da findt der zirckl in kurtzer zeit Wie serr ein statt von der andern leit” — ​“The compasses find in a short time how far one city is from another”. The reader could place the device on the map and move the arms to touch two cities, then measure the resulting span against the scale bars to find out the distance between them.

To the right of the scale bar is a blank shield surmounted by a wind head. Although the text below is hard to decipher, it could read ​‘Privilegh’ (privilege). Erlinger might have intended the blank shield to bear the coats-of-arms of the city that granted the map a privilege.

We are unable to trace any extant example of this edition of the map. The only other known recorded example was, until 1945, in the Munich Military Museum, but is now lost. The lost map was illustrated by A. Herman in ​‘Die altesten Karten Deutschlands’; and by Leo Bagrow and R.A. Skelton in ​‘History of Cartography’. It differs from the present example by the colouring of the map and the placement of the heraldic border.

The only extant example of the 1524 edition is held in the British Library. The map varies from our 1530 edition by the hand-colour applied to the map, the form of the privilege shield, and, most strikingly, the absence of the heraldic border.

Georg Erlinger (c1485-1541) was an Augsburg printer and ​“form cutter” of considerable renown. Little is known of his early life. However, we know from the Bamberg municipal archives that he studied at Ingolstadt in 1501, but did not complete his studies. After leaving Ingolstadt, he settled in Augsburg where he built a fine reputation as a printer and engraver.

In c.1520 he published a world map, and produced two maps of the environs of Nuremberg; the latter containing a small plan of Bamberg. As well as maps, Erlinger published several scientific works, most notably those of Johann Schöner, the famous mathematician who had collaborated with Albrecht Dürer on his map of the world and charts of the heavens, and the first owner of the only extant example of the first map to name America – the wall map by Waldseemüller now hanging in the Library of Congress. From 1530 to until his death in 1541 he was the authorized court printer of the Prince-Bishop of Bamberg. 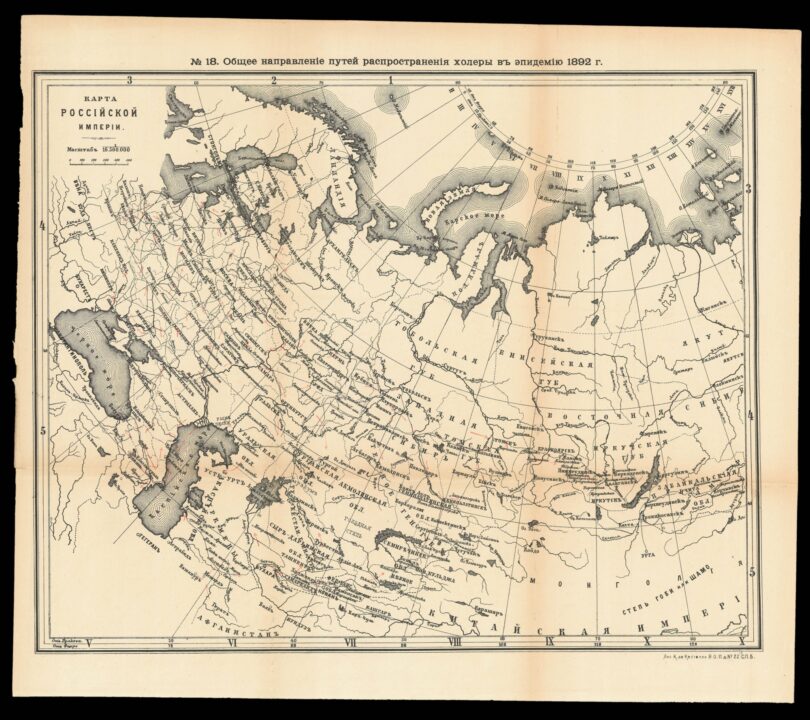