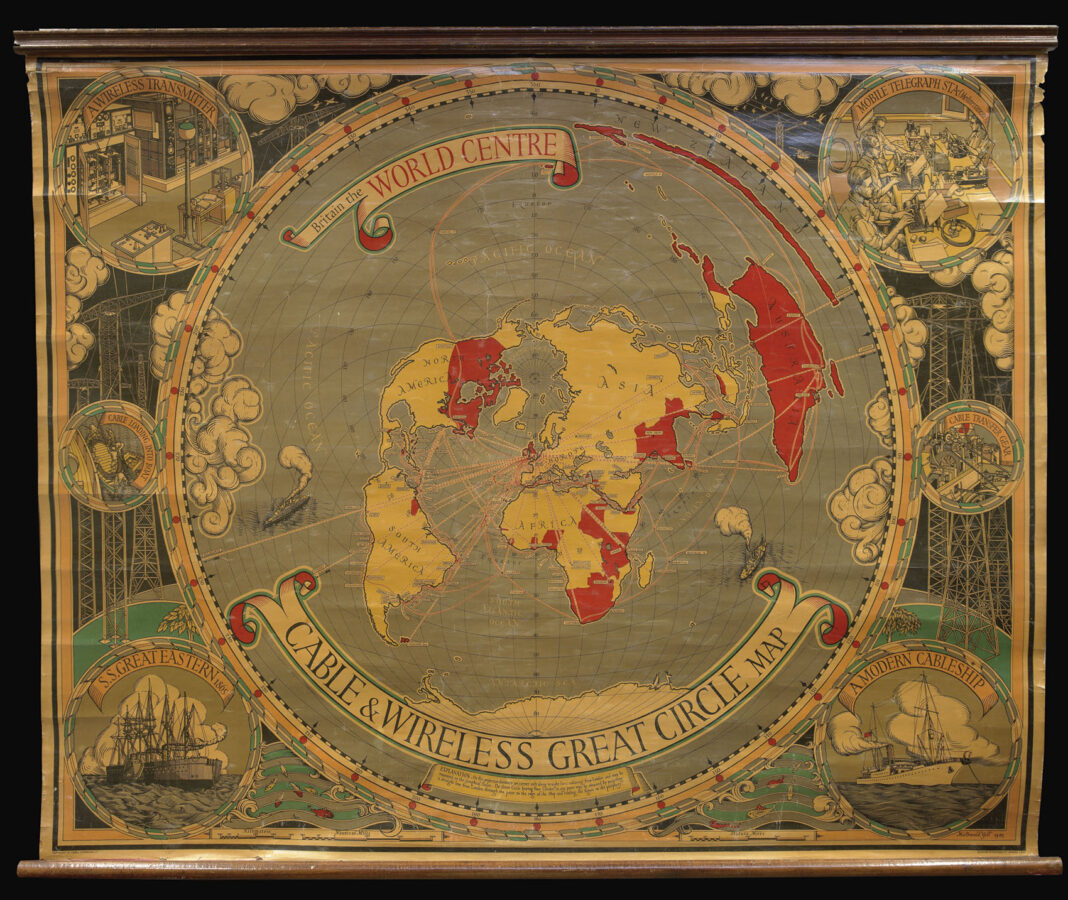 A superb poster map on an ​‘azimuthal’ or Great Circle projection, showing the world in one great sphere with London at the centre. The objective is to show the paths of radio beams from London to the far reaches of the Empire in straight lines. On this projection the radio waves to Sydney pass over Moscow correctly, whereas on a Mercator Projection map a straight line would cross Arabia. As the map was commissioned by Cable and Wireless the decorative borders relate to their business, with a background of pylons. The four corner roundels depict: ​‘SS Great Eastern 1865’, which laid the first lasting transatlantic telegraph cable in 1866; ​‘A Modern Cableship’; ​‘A Wireless Transmitter’; and ​‘Mobile Telegraph Sta. (Mediterranean)’. The two smaller roundels show ​‘Cable loading into Boat’ and ​‘Cable Transfer Gear’.

Leslie MacDonald Gill (1884- 1947) was a note graphic designer, cartographer, artist and architect. Born in Brighton, he was the younger brother of Eric Gill, one of the leading figures of the Arts and Crafts movement. In 1914 his ​“Wonderground Map”, commissioned by Frank Pick, and hung at every station, helped to save the London Underground by presenting an accurate map which also had a humorous side in cartoon style. Produced in poster form, it was also made available for sale to members of the public and proved to be very popular. Elder brother Eric, who at that time was engaged in a commission for Westminster Cathedral, was included at the bottom of the map. He also designed of the standard upper case lettering used on headstones and war memorials by the Imperial War Graves Commission. But it is perhaps his illustrated maps for which he is most well known. These maps have featured in a series of exhibitions including Magnificent Maps exhibition in 2010 at the British Library, an exhibition MacDonald Gill, Out of the Shadows in 2011 at the University of Brighton and at the Mind the Map exhibition in 2012 at the London Transport Museum.