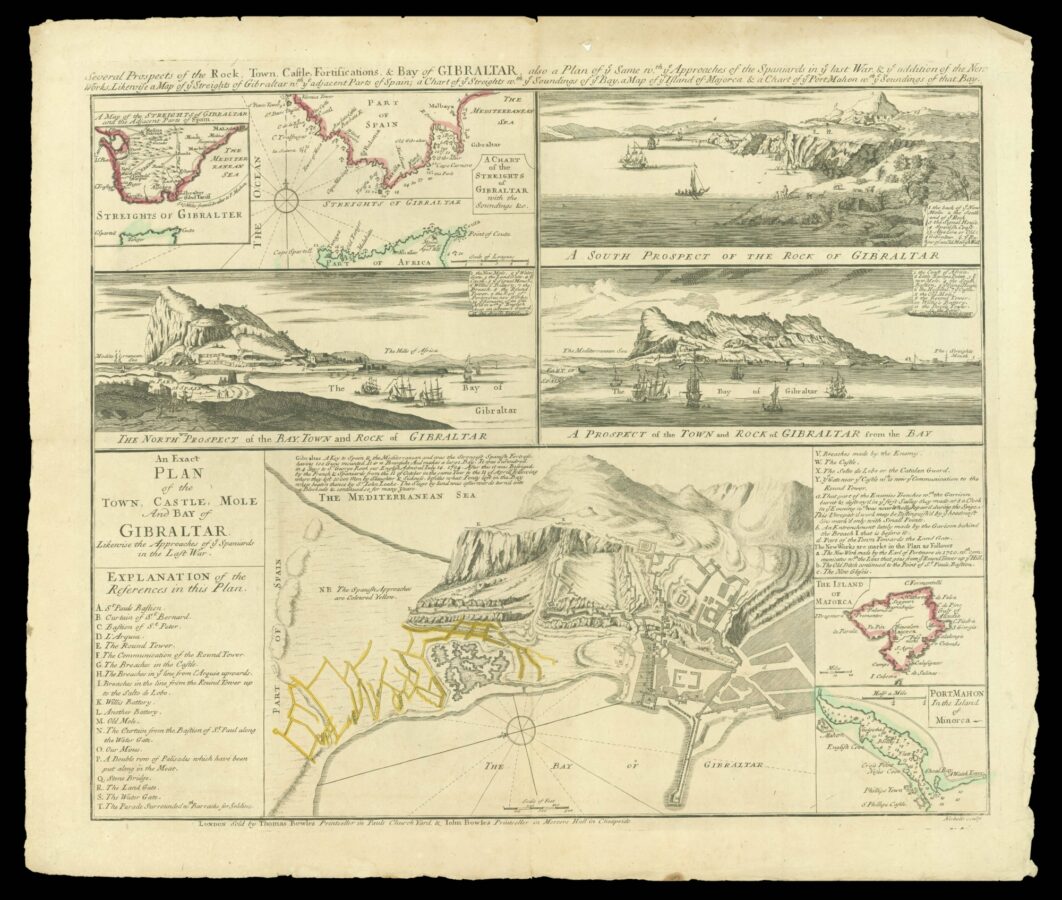 Gibraltar after the Treaty of Utrecht

Several Prospects of the Rock, Town, Castle, Fortifications, & Bay of Gibraltar also a Plan of ye same w.th ye Approaches of the Spaniards in ye last War, & ye addition of the New Works, Likewise a Map of ye Streights of Gibraltar w.th ye adjacent Parts of Spain; a Chart of ye Streights wth. ye Soundings of ye Bay, a Map of ye Island of Majorca & a Chart of Port Mahon w.th ye Soundings of that Bay

The history of the plate is unclear; it seems likely that the sheet was first engraved and printed by Nicholls in about 1712–1713, at the end of the War of the Spanish Succession, to show Britain’s gains, as confirmed by the Treaty of Utrecht in 1713.

This printing bears the joint imprint of Thomas Bowles (II) and John Bowles, the latter’s address dateable to 1727, also the occasion of Spain’s second attempt to recapture Gibraltar, an appropriate time to reprint the plate. Nicholls disappears from view between 1728 and 1731, and it may be that the plate was acquired by the Bowles brothers at this point, and some additions made to the main plan (re-engraving visible in the key) to bring the plate up to date.

The main part of the plate is ​‘An Exact Plan o the Town, Castle, Mole and Bay of Gibraltar Likewise the Approaches of ye Spaniards in the Last War. …’; there are also views of Gibraltar from differing aspects, emphasising the strong defensive nature of the peninsula.

If there is a [1712–1713] printing, no exemplar is recorded; this surmised second state has been found in two institutional locations: the BL and Cambridge University Library.

It was advertised by the brothers in the Daily Post (issue 2290) for 25th January, 1727 as,
​“This Day is publish’d, curiously engraved on a Sheet of Paper … with the Approaches of the Spaniards in the last War, with the Addition of the new Works …”.